It was only 5 years ago that shooting a band with multiple camera angles and multitracked audio was a herculean task that required specific, expensive gear. The software alone would cost several thousands of dollars, making a professional video recording of a band an extremely cost-prohibitive undertaking. Fast forward to the present, where you can get Final Cut Pro, Logic Pro, a DSLR and an audio interface all for under a thousand dollars. It's an exciting time to be in a band, and it's an equally exciting time to be in the business of recording and producing. Let's take a look at a workflow for getting top-notch results when recording multi-camera video and multitrack audio.

You're going to want to try to get everything as isolated as possible without compromising the aesthetic look of the video shoot. Mic everything as closely as possible, and utilize direct outs / direct boxes whenever possible. The more direct and isolated you can capture a sound, the more you can manipulate that sound in the mix. Logic has wonderful amp simulations for guitar and bass, and capturing those instruments directly will keep them isolated as well as at a low stage volume to prevent leakage.

Most DSLR cameras have video recording capability these days. Beg, borrow and steal (not really) every one that you can get your hands on. With good lighting, iPhones will give you great results for some creative angles as well! Make sure you can't see any of the cameras in your shots, and be sure you have a decent '˜wide' shot to fall back on. Often, I'll have to cut away from a close shot to hide an overdubbed mistake or to draw focus elsewhere.

Ok, so we're not using tape anymore'¦ but you get the idea. Press record on everything, verify that every device is recording audio and video. If the device you are using allows custom file naming, it might be good to name each file to match the angle/camera you are using.

We're going to utilize Final Cut's automatic synchronization, but it doesn't hurt to help it along. Also, you may have to '˜nudge' one of your video feeds forward or backwards manually and it never hurts to have a common sync point. Have the drummer hit a single snare drum surrounded by a few seconds of silence on either end. Announce what song and take you're on as well. All of these things should get taken care of with Final Cut Pro tools and good file management'"but it never hurts to have a backup in your workflow. 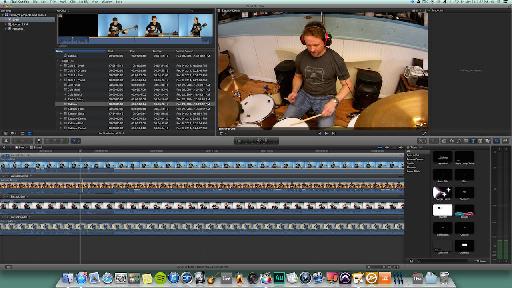 Good file management is key to quick editing. Hopefully, your cameras labeled your files with unique names. If not, now might be a good time to label everything. Put everything in clearly labeled folders that are easy to organize.

Now the real fun begins! Open up the Logic files and mix/edit them as if you were producing an album. Spend some time to get it sounding great and overdub when necessary (you DID use a lot of camera angles so you can cut away when you have to, right?). If you have someone who can master it, don't skip that step! If not, put a limiter at the end of your signal chain to maximize your volume but be careful not to squash the dynamics of your mix.

Import the audio just as you did your video with the import media function. Audio will have a different icon than video, so it should be pretty easy to tell the difference between the two.

Icons - The Audio, Video and Multicam Clip icons make it easy to find what you need at a quick glance.

This is the tricky bit. Select all of the video angles as well as the audio for a single take and choose '˜New Multicam Clip'. Be sure to tell FCP X to '˜use the audio for synchronization' in the dialog box. 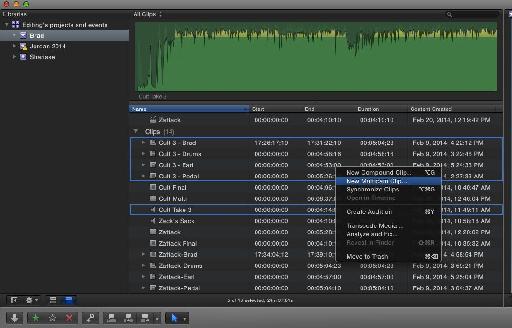 Multicam - Select all of the takes, then right-click and choose '˜New Multicam Clip'.

Drag your new multiclip into a project and select it in the timeline. Go to the '˜audio' tab in the inspector, select your edited Logic audio as the audio track, and disable any other audio tracks. 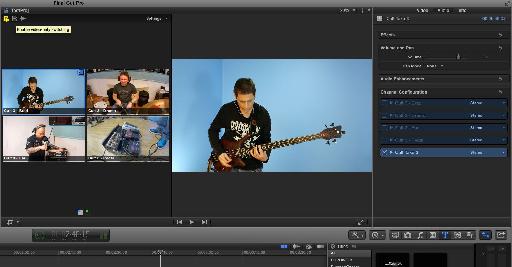 Audio Track and Video Only - Choose the audio track you want to use in the inspector on the right. Select '˜video only switching' in the viewer on the left.

In the viewer display, you should see multiple angles available. If you don't, press '˜shift-command-7' and they should pop up. In the upper left corner of the viewer, select the icon for '˜video-only switching' to make sure your project sticks with your Logic audio for the sound. 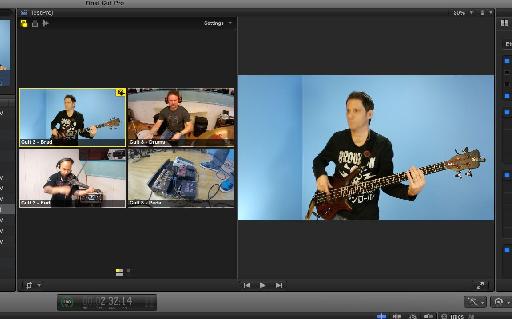 Angles - Are you starting to feel like a big-shot director yet?

As you watch the video, sit back and be the director. Click on an angle in the viewer while the song is playing and FCPX will automatically make a cut in the timeline and switch to it. When you get to the end of the song, you'll have a bunch of cuts in your timeline. Leave them be or add transitions as you desire. Export your video and share your new creation with the world. Congratulations, you've just made your first live concert film!

Dream It. Do It.
Do you want to learn Core Training: Audio Editing, EQ and FX?
Yes, I want to learn!
No Thanks, I just want to read the article.
Feedback
How are we doing?
We'd love your thoughts, feedback and questions regarding our new site. All feedback is appreciated!
We do not respond to this form! If you need support, please visit our support page.
Thank you for your input!
Your message has been successfully sent
Course Advisor
Don't Know Where To Start?
Ask A Course Advisor