In this 2nd part we’re going to look at the diminished scale. If there was ever a scale that conjured up dark and sinister feelings this is it! Its use in film scores is quite prolific for this very reason. If you want to alert your audience that something is, or about to go horribly wrong this scale is your most useful weapon!

The diminished scale is an eight note scale (sometimes called the octatonic scale) that is built by stacking two diminished 7th chords (1-b3-b5-bb7 or 1-b3-b5-6) on top of each other. There are two common versions of the scale, one that stacks the chords a whole step apart and one that stacks the chords a half step apart (probably the most common).

Here’s the half/whole Diminished scale in C on the stave.

Here are the notes and intervals (and their distance in semitones and tones) of the scale. I’ve written this using all flats and the 6th is written as a major 6th not a bb7 to make it easier to grasp.

Starting from the one (root) we can see the first diminished 7th chord. This is constructed from C - Eb - Gb and A.

The A can be thought of as a bb7 (hence diminished 7th) or a natural 6th. I prefer the later.

All of these chord tones are a minor 3rd away from each other (sT + T).

Because of the symmetrical nature of the intervals in this chord (all minor 3rds) we can essentially start a diminished 7th chord on all of these notes.

Again, a sound we’re all pretty familiar with.

The exact same thing happens when we start from the second step of the scale on the b2. In this case we get a diminished 7th chord starting on Db.

Basically we have a diminished 7th chord on each step of the scale.

When we ascend the half/whole diminished scale using these chords on each scale step we get something like this.

This is more of a complex sound and always reminds me of silent movie piano when the bad guy is creeping up on his victim. There’s a real sense of tension as the chords rise up. This is however only one aspect of how you can harmonize the scale.

The half/whole diminished scale is quite odd in the fact that it contains both a minor and major 3rd. Most scales have either one or the other with the 3rd defining them as major or minor scales. Saying that the scale has a distinctly minor sound to it.

The scale also has a natural 5th as well as a flattened 5th (the Devil's Interval!). This throws up some very interesting things we can do with the scale as far as chords go. These things are the tricks you’ll hear in a lot of scores.

Let’s start with this. Because we have a minor 3rd and a natural 5th we can make a minor triad at the root. In this case Cmin (C Eb G).

Now due to the symmetrical factor of the scale we can generate a minor triad by moving up a minor 3rd each time (like the diminished 7th chord). So now we get C min, Eb min, Gb min and A min. It sounds like this.

It’s a new sound but with a diminished quality!

So what happens when we try to ascend the whole scale in minor triads? Well it’s not as simple as moving them up half, whole, half, whole etc. as it wouldn’t work within the scale. Instead something else happens.

The second step of the scale (Db) now becomes the 5th of a Minor triad a b5 away from C instead of a root note. This chord would be Gb min. The trick to this is that there is an inversion of Gb min right next to the C min. 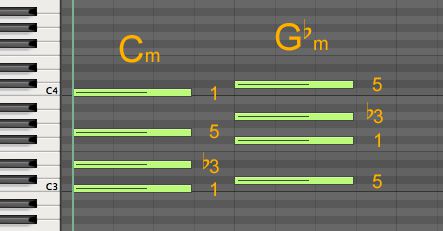 We can then move this whole scenario up a minor 3rd again to Eb and play a minor triad a flat 5th away from that (A min). We then just repeat the same move. What we get is this.

Take this for example. This is a mock up of a very well known piece of film music.

It is of course the ‘Ark’ theme from Raiders of the Lost Ark. It uses this exact move! C min - Gb min - C min. The melody is the top note of each triad inversion.

Depending on how you arrange these minor chord moves, we can go from something spooky like the above example to something totally over the top that says “It’s a MONSTER!!!”

This is just C min - A min - Eb min. You can move about any minor chord that can be derived from the diminished scale in steps of minor 3rds. These include Min7, Min7(b5), Min13, Min7(b9) etc.

There is also a major triad inside the diminished scale too.

This means we can do exactly the same thing we did with the Minor triads. We can move them a Minor 3rd at a time like this, C - Eb - Gb - A.

Or ascend the scale using inversions of our major triads a b5 away like so.

The change in harmony is very subtle compared to the minor version but the movement gives it a similar feel.

You can also mash the major and minor together to get many different variations going up or down. Try and experiment with some variations.

There are so many applications for this scale and associated chords and movements. One place you’ll hear a lot of diminished scale is in big action movie stuff, especially chase scenes! Here’s a quick example I knocked up. I think you get the idea!

This uses a static diminished riff idea in the strings with the brass rising up through some pretty dissonant changes (lots of clashing semitones in the trumpets). The thing about this is I could easily transpose the whole thing up a Minor 3rd to ramp up the tension as the whole thing is diminished. Another common trick!

If you want to hear a master at work just check out Alan Silvestri’s score for Predator. A work of art and one of my favorites. Lots of Diminished scale ideas throughout the whole score giving it a menacing feel. The cue ‘Billy’ is a wonderful example of the diminished scale in action with the semitone string motif descending in minor 3rds. Classic!!

Well you're not going to hear many Top 10 hits using the diminished scale, that’s for sure!!

You will find it used widely in Jazz though. This is because the diminished scale also contains the Dominant 7 chord (and its alterations), a chord type widely used in Jazz and Blues and Funk.

This makes the Diminished scale a great tool for improvising over ‘7’ chords as it allows the player to step outside using the b9 and b5 while playing a scale that contains all the inside notes of the chord.

That however is another tutorial altogether!!

Toby Pitman
For the past 20 years Toby has worked as a professional guitarist, programmer and producer. Clients include Sir Paul McCartney, George Michael, Shirley Bassey, Yusuf Islam, Giles Martin as well as the London 2012 Olympic Ceremonies. He has also worked extensively in TV, Advertising and Film. As well as composing himself he has also worked alongside many composers like David Arnold, Clint Mansell and Simon Franglen on many major film releases. An expert in synthesis and sound design Toby has also lectured for Apple on their Logic Pro music software which he has used since its days on the Atari. He has also worked as an educator for the International Guitar Foundation and the Brighton Institute of Modern Music teaching guitar. In his spare time (of which there is very little) he moonlights as a motion graphics artist specialising in Cinema 4D and After Effects.
Related Videos
Comments (8)