To the untrained eye, Axino Synergy Core may look like a USB microphone, much like any other on the market. It is, indeed, an outstanding microphone in its own right — replete with a large, gold-spluttered diaphragm delivering low self-noise for clean- and natural-sounding recordings, as well as a cardioid pickup pattern minimising background noise capture in favour of focusing on the sound source directly in front of the mic itself, yet closer inspection indicates a compact, all-in-one studio-grade recording system. Its inbuilt preamp is a hybrid of the renowned discrete preamps pleasingly put to use in Antelope Audio’s acclaimed audio interfaces and integrated circuit preamps. Put it this way: when it comes to creating a compact, all-in-one studio-grade recording system, there’s more to Axino Synergy Core than meets the eye — much more, in fact, for it features technology present in Antelope Audio’s top-of-the-line audio interfaces.

Moving on from the pristine sound of the microphone itself and into the world of microphone modelling, Axino Synergy Core’s Modeling Engine enables access to no fewer than 18 emulations of legendary microphones, ranging from dynamic designs to rare tube and FET (Field Effect Transistor) large- diaphragm condenser classics. Choose from Berlin 47 FT, Berlin 47 TU, Berlin 49T, Berlin 57, Berlin 67, Berlin 87, Berlin K86, Berlin M103, Berlin M251, Berlin V563, Hamburg 441, Illinois 7B, Illinois 57, Minnesota 20, Tokyo 800T, Vienna 12, Vienna 112, and Vienna 414. Apply any of them in realtime during recording or when mixing in a DAW (Digital Audio Workstation) and experiment with the flexibility and versatility on offer by choosing the microphone that best suits a particular project’s needs, such as vocals, for example. Seeking something brighter and more upfront or maybe more retro and warmer? With Axino Synergy Core there is surely something for everything.

But before even opening the easy-to-use software control panel for macOS and Windows, the microphone itself offers much in the way of hands-on control courtesy of analogue VOLUME and HP (headphone) volume controls alongside a -10dB pad switch and a high-pass filter switch. As an engineering feat for all to see and hear, Axino Synergy Core cleverly packs an entire audio interface into a compact, all-in-one studio-grade recording system with DSP (Digital Signal Processing) and FPGA (Field Programmable Gate Array) processing, precise clocking, and outstanding conversion. Indeed, it uses the same AFCTM technology that defines Antelope Audio’s acclaimed audio interfaces; in turn, this governs the AD/DA (analogue-to- digital/digital-to-analogue) conversion to ensure pristine audio quality at 24-bit/192 kHz playback and recording resolution — rare for a USB microphone. It is this cutting-edge combination of clocking and conversion that forms the foundation upon which the exceptional sound so solidly rests. 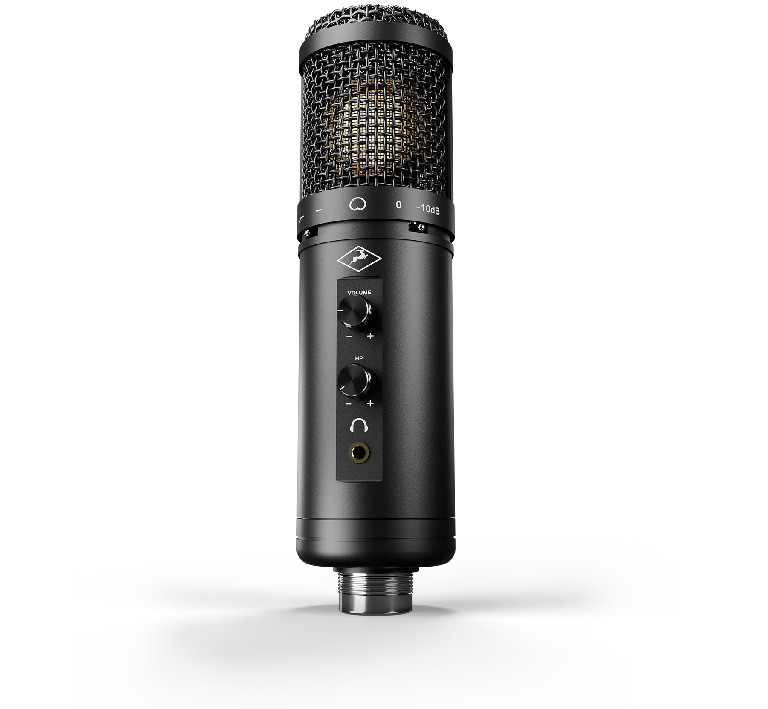 Antelope Audio does not stop there; by integrating its proprietary Synergy Core effects platform with Axino Synergy Core, users can apply effects during live tracking and monitor through them with next to no latency as all processing is done inside the microphone with no strain on the computer. CPU (Central Processing Unit) draining effects are offloaded, allowing Axino Synergy Core to offer a level of audio processing not typically possible with conventional USB microphones. Processing with the Synergy Core effects library during post-production and live streaming is also possible, by making use of the two stereo playback channels with effects strips and the included loopback functionality. The Axino Synergy Core comes complete with the following Synergy Core effects: AURAVERB (reverb); BAE-1073 (three-band EQ with high-pass filter); BAE-1073MP (mic/line preamp); FET-A76 (FET compressor/ limiting amplifier); GYRAF GYRATEC IX (dual-tube mic preamp with high-pass filter); MASTER DE-ESSER (de-esser); OPTO 2A (tube optical compressor/limiter), POWEREX (expander); POWERGATE (noise gate); and VEQ-55A (three-band EQ with high-pass and low-pass filters). Antelope Audio’s ever-expanding library of 80-plus expansions already available are created using the high-end professional audio manufacturer’s unique hardware modelling approach, and includes some of the most coveted and hard-to-find analogue studio gear from around the world, with the likes of Grove Hill LIVERPOOL — a contemporary fusion of finest American and British compression technologies — and Blonder Tongue Audio Baton — an all-tube graphic equaliser so rare and special that it has an actual album named after it — both benefitting from the Synergy Core treatment. Also available are renowned third-party effects like Auto-Tune Synergy — a custom-designed plug-in that leverages the next-generation hardware acceleration of the Synergy Core platform to deliver the legendary Auto-Tune® pitch correction and vocal effects with ultra-low latency — and Instinct Synergy — working with Inertia Sound Systems to transport the creative audio processing tools producer’s popular Instinct creative signal processing effect plug-in to its renamed resting place, accelerated by the Synergy Core engine. Expansions start at $55.00 USD, and are available from Antelope Audio’s Software Store.