All Articles News
FREE: Logic Pro Synth Presets: Mixed Bag, Vol.1
Toby Pitman on Sun, December 21st 11 comments
Language
And we're half way through our Xmas Gift giveaway on Day #4. If you're a Logic user, then this one is for you. Download these free synth presets now. Simply login or sig up for free to do it.

Here's a little mixed bag of Software Instrument presets for Logic X. You can of course tweak these to your liking and assign any parameters to Smart Controls if you want. These are the kind of general sounds I'd build for myself. From basic traditional things to some weirder textural stuff all using Logic's native plugins. 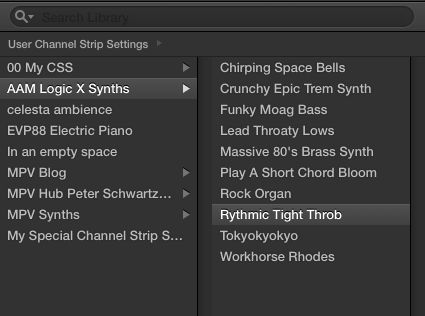 This is what the library view looks like when you navigate to the correct folder:

Toby Pitman
For the past 20 years Toby has worked as a professional guitarist, programmer and producer. Clients include Sir Paul McCartney, George Michael, Shirley Bassey, Yusuf Islam, Giles Martin as well as the London 2012 Olympic Ceremonies. He has also worked extensively in TV, Advertising and Film. As well as composing himself he has also worked alongside many composers like David Arnold, Clint Mansell and Simon Franglen on many major film releases. An expert in synthesis and sound design Toby has also lectured for Apple on their Logic Pro music software which he has used since its days on the Atari. He has also worked as an educator for the International Guitar Foundation and the Brighton Institute of Modern Music teaching guitar. In his spare time (of which there is very little) he moonlights as a motion graphics artist specialising in Cinema 4D and After Effects.
Related Videos
Comments (11)