All Articles News
KORG Introduces the New Kronos Keyboard Workstation
Rounik Sethi on Fri, November 14th 0 comments
Language
Korg tell us their new Kronos is their most powerful version of their Flagship music workstation ever. It has a redesigned exterior, expanded piano engine and improved touch panel navigation.

(MELVILLE, NY'"November 12, 2014)--On November 12, KORG USA introduces the new KRONOS, the most powerful version of its flagship keyboard Music Workstation to date; it was announced by James Sajeva, Brand Manager for Korg products at KORG USA.

'The new Kronos features the unrivaled 9-engine structure from previous versions, with numerous improvements to both sound capability and overall functionality. Truly, this is the most powerful synthesizer on the planet just got more powerful'' Sajeva said.

'Our SGX piano engine, already revered for its German and Japanese grands, now also includes a 9GB Berlin grand with dedicated una corda (soft pedal) samples, plus sympathetic string resonance that works on all the SGX pianos' he continued.  'It's truly an amazing piano experience. There are new banks of sounds based on famous song titles for our cover players and those looking for '˜that' sound for their recordings, plus a '˜best of' bank from KaPro, who has created numerous libraries for the Kronos line.'

Other new features include system-wide Touch/Drag via the Kronos' huge color TouchViewâ„¢ screen; allowing the user to edit onscreen parameters faster and more naturally than ever.

An evolved Set List mode provides the capability to resize their custom text per set list entry, and enter text via either an onscreen QWERTY or external USB ASCII keyboard. Entries can also be color-coded for better organization and visibility, and users can even decide how many set list entries appear on the screen at time, allowing for more (and larger) onscreen text to remind you of lyrics, changes, or other notes.

An improved search function helps users to find the perfect sound faster than ever. 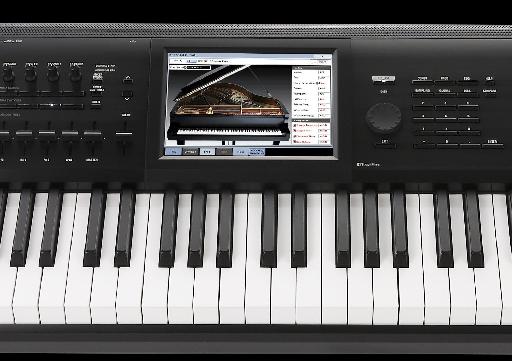 Close-up of the Korg Kronos screen and navigation screen in action.

Other improvements include onscreen metering in Combination and Sequencer modes, along with the ability to edit Programs within a Combination to hear the edits in context with other parts.

The improvements don't end with the software, either; the new Kronos also boasts a new look, including natural wood side panels, easier-to-read silkscreened text, a sophisticated '" and functional '" vented back panel, and gold-plated audio I/O jacks.