All Articles News
MIDI Adopts CI and MPE: Easier To Use & More Expressive Synths & Controllers Coming
Rounik Sethi on Thu, February 1st 1 comments
MMA has unveiled two protocols that have been officially adopted as part of the MIDI spec that will make instruments easier to use and more expressive to play. The future is looking bright!

It's over 30 years old yet the MIDI protocol is one that continues to make use of its power and convenience while pushing to adopt new standards that ultimately are designed to make the life of musicians and producers better all round.

At NAMM 2018 MMA (MIDI Manufacturers Association) held an event showcasing how new feature of MIDI are going to pave the way for significant future expansion. Namely, we're talking MIDI-CI (Capability Inquiry) and MPE (enabling polyphonic expression). You know about the later from products like ROLI, Linnstrument, Joué and even Logic Pro. But MIDI-CI brings a level of intelligence and knowledge to supported devices that will make configuring and mapping easier, or even automatic, in many cases. This is an exciting time for studio and live musicians that use MIDI (that's like 99% of us?)

Los Angeles, CA, January 28, 2018 - Today marks the MIDI Manufacturers Association’s (MMA) ratification of an important new extension to MIDI, the MIDI Capability Inquiry (MIDI-CI) Specification. MIDI Capability Inquiry messages enable devices to automatically inquire and set features that improve compatibility and simplify configuration. The messages also enable future enhancements such as negotiating to use a next generation protocol, and provide a “fall back” mechanism, so if a device does not support a new feature it continues to work as defined by MIDI 1.0.

Profiles are defined sets of rules for how a MIDI device sends or responds to specific MIDI messages to achieve a specific purpose or suit a specific application. Profiles make products easier to configure and provide better interoperability. “Profile auto configuration of complex controller mappings is like MIDI Learn on steroids,” said Mike Kent of MK2 Image and the Chair of the MMA’s MIDI-CI working group.

At the MMA’s Annual Meeting during the 2018 Winter NAMM Show, Korg, Roland and Yamaha demonstrated products interoperating using a draft Drawbar Organ Profile and a draft Analog Synth Profile. They also produced a movie showing a Drone Profile, which used MIDI messages sent to a Digital Proportional Controller to control the movements of a Drone in sync with music.

Property Exchange (PE) messages can get and set device properties including but not limited to product name, configuration settings, controller names, controller values, patch names and other meta data, etc. “Property Exchange total recall enables storing of multi device setups from a variety of manufacturers into a DAW project file, and allows seamlessly combining hardware and software synthesizers, providing users with the best of both worlds” stated Koichi Mizumoto of Roland Japan, and head of the AMEI MIDI-CI working group in Japan.

MIDI-CI defines a method for two devices to negotiate to use a future industry standard “Next Generation” MMA/AMEI protocol that is now being developed, or a manufacturer- specific protocol. Devices that do not support any new protocol will continue to use MIDI 1.0 protocol.

The MIDI-CI Specification was developed by MMA with the Association of Musical Electronics Industries (AMEI), the body that maintains the MIDI Specification for Japan. AMEI adopted the CI Specification in November 2017. Having the Specification adopted by both bodies is necessary for it to be considered part of the official MIDI 1.0 Specification, which is a world-wide voluntary industry standard. MIDI-CI is just one of several initiatives that the MMA and AMEI are working on together to enhance MIDI technology. 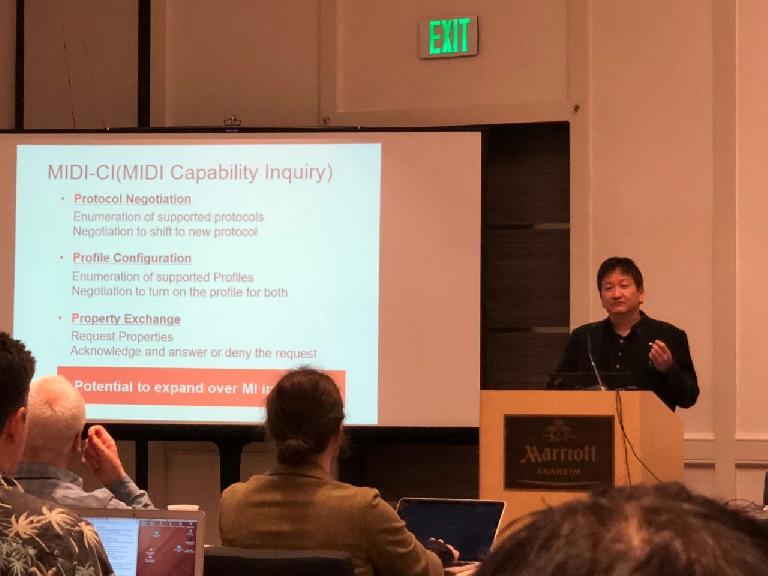 Koichi Mizumoto talking about the 3 P's in MIDI-CI.

“The really exciting part of MIDI-CI is that Protocol Negotiation paves the way for a new industry standard MIDI protocol that could enable new features like higher resolution, more channels and improved performance and expressiveness (while still maintaining backwards compatibility with current MIDI 1.0 devices),” said Yutaka Hasegawa, chairman of AMEI. “A new MIDI protocol would offer a bridge between music technology and new emerging technologies in other industries and allow creators, performers, and consumers to enjoy new and exciting musical experiences in the future.”

MMA President Tom White added: “MIDI-CI is a very important first step towards next generation MIDI products with added capability and creates the possibility to expand MIDI into new markets in the future. The MMA and AMEI will continue to develop additional specifications that build on MIDI-CI’s framework to expand the capabilities of MIDI while enhancing ease of use.”

Of course, now MIDI-CI has been adopted the hard work begins for the companies making MIDI devices. It will take time for them to implement these advanced MIDI features into their existing and future products.

The MIDI-CI specification will be available for download in a few weeks. To obtain a free copy, join the MIDI Association, the global community of people who work, play and create with MIDI at www.MIDI.org.

Prior to MPE, expressive gestures on synthesizers—such as pitch bending or adding vibrato—affected all notes being played. With MPE, every note a musician plays can be articulated individually for much greater expressiveness. 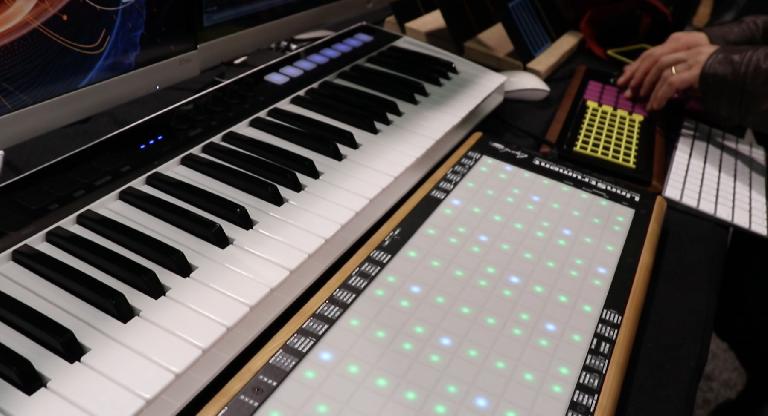 In MPE, each note is assigned its own MIDI Channel, so that Channel-wide expression messages can be applied to each note individually. Music making products (such as the ROLI Seaboard, Moog’s Animoog, and Apple’s Logic) take advantage of this so that musicians can apply multiple dimensions of finger movement control: left and right, forward and back, downward pressure, and more.

MMA President Tom White notes that “The efforts of the members (companies) of MMA has resulted in a specification for Polyphonic Expression that provides for interoperability among products from different manufacturers, and benefits the entire music industry.”

Jean-Baptiste Thiebaut of ROLI concurs. “The MPE specification paves the way for a new generation of expressive controllers and music software, providing many creative opportunities for live musicians and producers. MPE remains fully compatible with MIDI."

The MPE specification will be available for download in the coming weeks. To obtain a free copy, join the MIDI Association, the global community of people who work, play and create with MIDI, at www.MIDI.org.

Learn more about MIDI in the Ask.Audio Academy: https://ask.audio/academy?nleloc=category/audio/topic/midi
Related