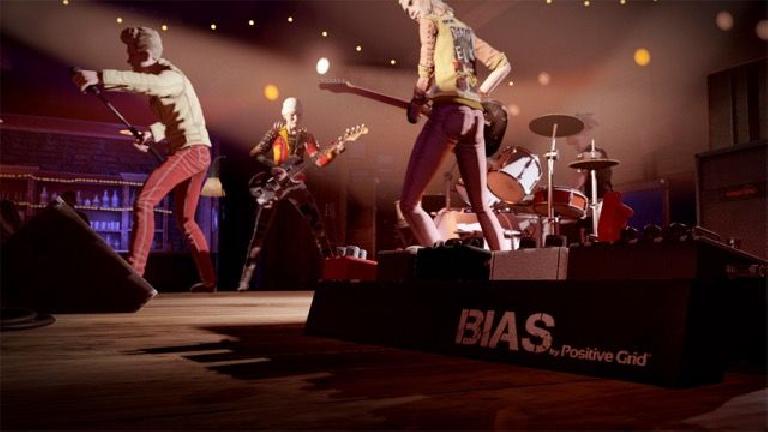 “Freestyle Guitar Solos are a completely new form of music gameplay we’ve designed for Rock Band 4, and it wouldn’t work unless those solos sounded amazing,” says Harmonix CEO, Steve Janiak, “By partnering with Positive Grid to integrate their world-class amp simulations into the game, we can assure that the solos players are able to create in Rock Band 4 deliver the sonic impact we’re going for.”

"Rock Band is a giant in music games we all love to play," says Calvin Abel, CEO of Positive Grid, "we are very excited that our BIAS Amp technology can make Rock Band 4 even more fun and powerful. With BIAS Amps and Freestyle Guitar Solos, players can experience rich guitar tones right in the gameplay, it's authentic and game changing."

Songs in Rock Band 4 will feature Freestyle Guitar Solo gameplay sections that will use the BIAS amp simulation that is the best tonal fit for the guitar sound featured in that specific song. Accessible and fun to even non-musicians, Freestyle Guitar Solo gameplay allows players to string together incredible solos, and players will be able to enjoy the BIAS Amps tone experience without any technical knowledge about guitar amplifiers.

BIAS Amp is Positive Grid’s best selling guitar-amp modeler and designer for both iOS (iPhone/iPad) and desktop devices (Mac/PC). BIAS Amp captures the warmth and feel of real tube amps in every aspect, component by component, and it’s fully customizable, allowing users to swap out the tubes, preamp, transformer, tone stacks, cab, and mic to create custom amp models. Users can easily plug and play into BIAS Amp just by using a guitar interface and a standard guitar cable.

For more information on Rock Band 4, please go to www.rockband.com

For more information on BIAS Amps please go to www.positivegrid.com