All Articles News
The Music Royalties Earned From 1,000,000 YouTube Plays Is Shocking
Rounik Sethi on Wed, March 1st 1 comments
Language
So you got one million plays of your music tracks in videos on YouTube. Sounds impressive doesn't it? But what that amounts to in actual revenue is shocking and depressing.

If YouTube told you your music videos or videos containing your music had been streamed over 1 million times you may expect some significant ad royalties due. Or perhaps, knowing the state of the industry for music makers, you might realistically assume the amount may not be enough to live on for a year, but enough for a month or two. Unfortunately, you'd be very wrong.

According to an anonymous artist via Digital Music News, after 1,048,305 plays on YouTube (not YouTube Red) he/she received a whopping $64.60 from ad revenue. This appears to be from videos on YouTube which were using his music (not neccessarily videos on his channel). 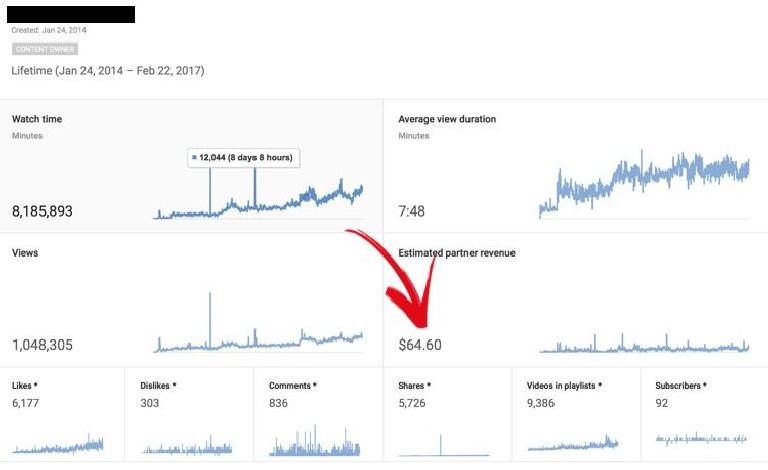 Shocked? Don't be. The writing has been on the wall for a while now. It's becoming increasing more dificult for artists to earn a living via digital streaming whether that be Spotify or other streaming services. In fact, this points to total revenues per view: $0.0000616.

Understandably the artist in question is focusing their efforts away from videos as a source of revenue. It appears that to make money from your music in today's market we need to either get billions of plays or focus on live music performances, selling music on tangible formats like vinyl, CD, etc, and selling merch.

What are your experiences?

UPDATE: Some readers and authors and trainers of AskAudio have provided some valuable feedback about this article. It appears the musician above was NOT choosing to monetize his videos. In fact, we should make this clear that this appears to be revenue from videos where his music was used, so not necessarily his own videos.

If you are uploading your own music videos to your own YouTube channel, then activate monetization and AD inclusion on the videos and you should earn a lot more than $60 for 1,000,000 plays ;)

Learn about music royalties, licensing, copyright and everything you need to know about the business side of music making in these priceless video courses in the AskAudio Academy.
Related

Dream It. Do It.
Do you want to learn Mechanical Royalties and Licensing?
Yes, I want to learn!
No Thanks, I just want to read the article.
Feedback
How are we doing?
We'd love your thoughts, feedback and questions regarding our new site. All feedback is appreciated!
We do not respond to this form! If you need support, please visit our support page.
Thank you for your input!
Your message has been successfully sent
Course Advisor
Don't Know Where To Start?
Ask A Course Advisor