Photomerge has been a part of Photoshop for almost as long as I can remember (it was introduced in CS3). I recently took a look at it again as I thought it might be a shortcut for editing together a number of screen grabs I pulled from a website.

Well, not only was it the solution, but it made me re-look at what it can do…and it looks like it’s gotten a lot more sophisticated over time.

If my memory serves me correctly, this automated command was developed by a Dutch couple using mathematical algorithms but what it does is even more fascinating. It can combine several images into one seamless image, a panoramic one or even compose a decent-looking photomontage for you.

Just so I don’t throw anyone off by my images, I created the screen grabs using both Photoshop CS6 (which I have at work) and Photoshop CC from home. The interface is slightly different and the CC has a few more options but they do pretty much the same thing.

I’ve taken multiple images of the peonies growing in my yard. I shot the entire row of them one shot at a time overlapping my shots slightly. I did this in a random order to confuse Photoshop, but this algorithm is so good, it just doesn’t get confused.

My 15 random shots are below—along with two I took as close-ups to further stump the program.

How to merge these together

Go to File > Automate > Photomerge. Click on the ‘Auto’ radio button on the left. Then move to the ‘Source Files’ area in the center, browse through your images and pull the ones you want to merge. Click the ‘Blend Photos Together’ and the ‘Geometric Distortion Correction’ buttons below this window. And then tell it OK. (Image 2)

Photoshop does its thing and we can see it analyze the photos one by one. It finally spews out a merged image. The results from this try are below. (Image 3)

It looks like it threw out the 2 images I shot to confuse it, put about 7 images together below that, and the rest together below that. I have a feeling I didn’t do a very good job of overlapping because I know those two series can fit together. But considering the randomness of the images I gave it, I thought it did a pretty good job.

If you look at your Layers palette, you’ll notice that Photomerge has put each image on it’s own layer and each one now has its own Layer mask that it automatically created. I clicked off one to see just how it does its thing—and it looks like it only takes pieces of the image to stitch together. Interesting. (Image 4) 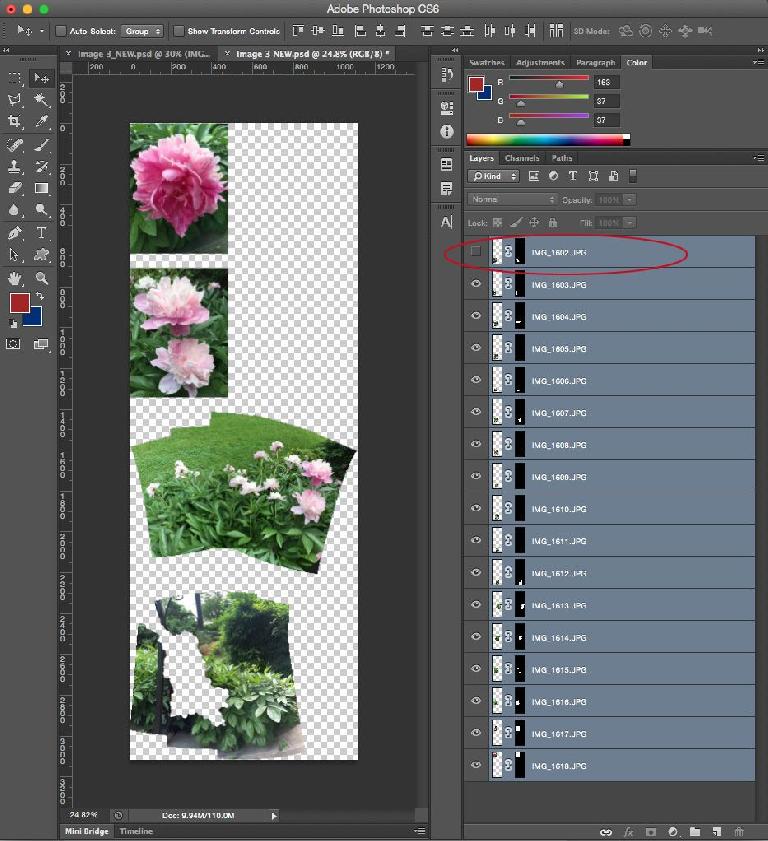 To see that this works with people as well, below are 12 images I screen snapped from a larger image, using a little overlap on each. (Image 5)

I once again told Photomerge to auto blend these images together, using the same steps as above and this is the Photomerge it created for me. (Image 6) 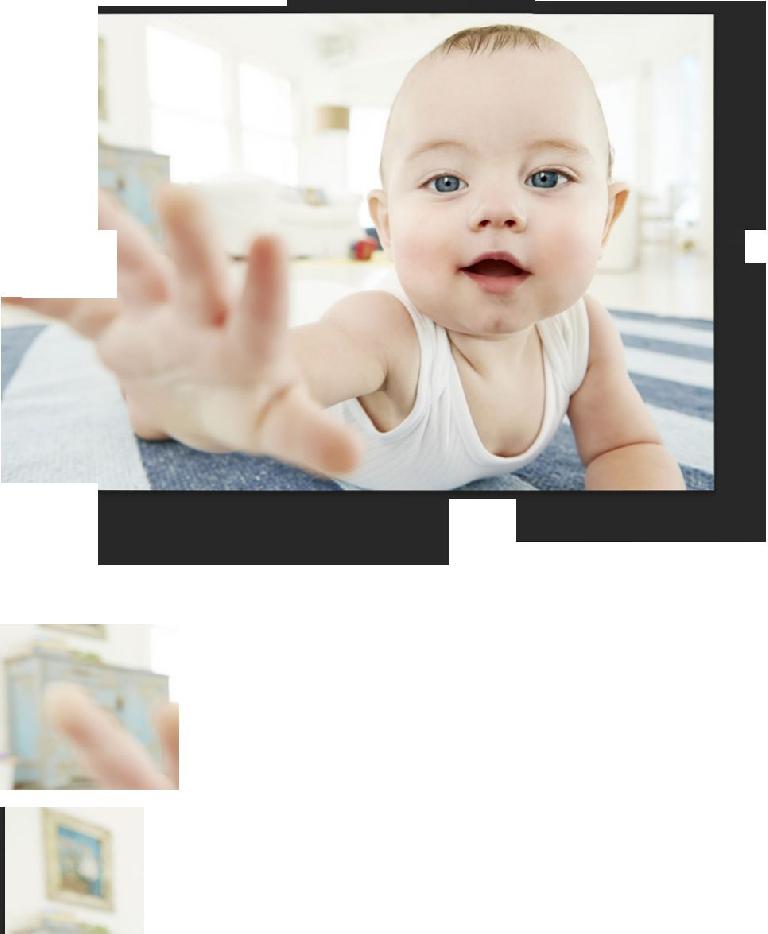 You can see that the 2 images it didn’t use fit into the upper left-hand corner but probably didn’t have enough overlap for the algorithm to work. It would be a simple fix to put these in by hand.

I used images that I took in my backyard to see what it would do when I asked it to make a collage. I shot oregano, sage, basil and some vine-y thing that had a blossom on it. (Image 7)

I once again used Photomerge but this time I clicked on ‘collage’ instead of ‘auto’. I also didn’t bother to check off the Geometric Distortion Correction radio button this time, since I was looking for interesting angles. (Image 8)

I once again let Photoshop do its thing, and this is what I got.

This is not nearly as cool as the results I got when I hand-picked about 5 stock images all with the same shade of green and Photomerge made me something that resembled a David Hockney painting.

Let’s try the collage aspect again using about 5 images I took of a construction site ‘rat’.

And here is what the Photomerge Collage feature created for me. (Image 10) 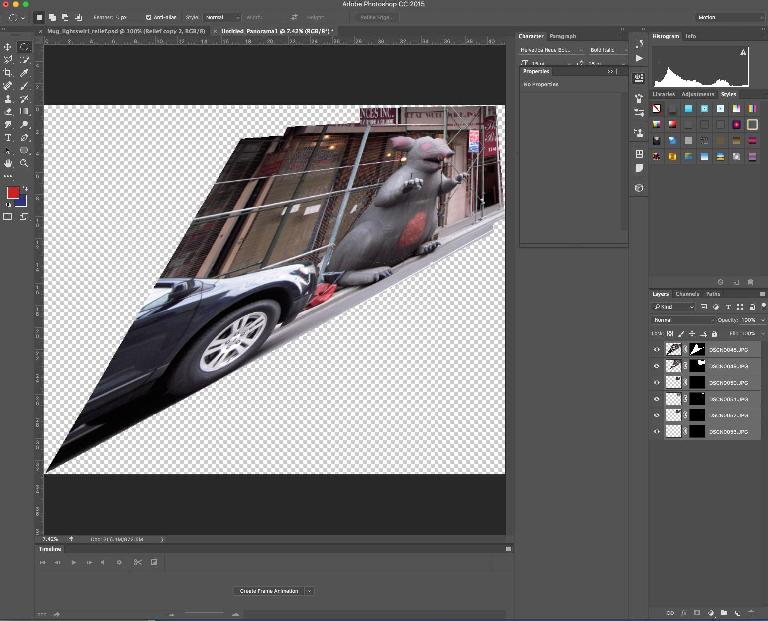 Since I have no control over what it does, I was a little surprised by the severe angle. Not an uninteresting effect but not something I would have suspected either since it generated such tame merges of the other images. 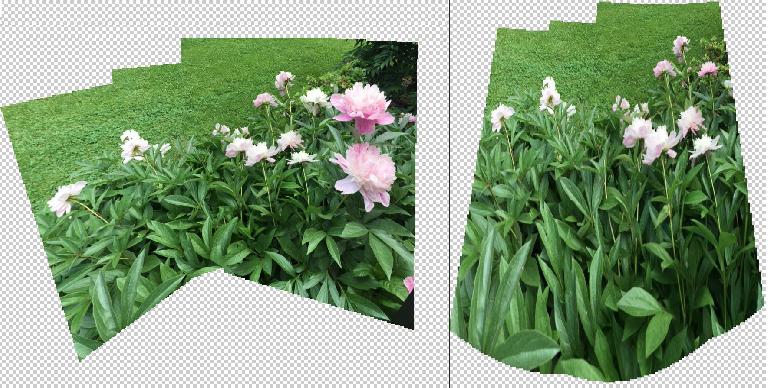 Perspective really didn’t give me a perspective but perhaps if I’d used different images to begin with it might have enhanced their angles since with our construction rat, we knew what the program was capable of. (Image 12) 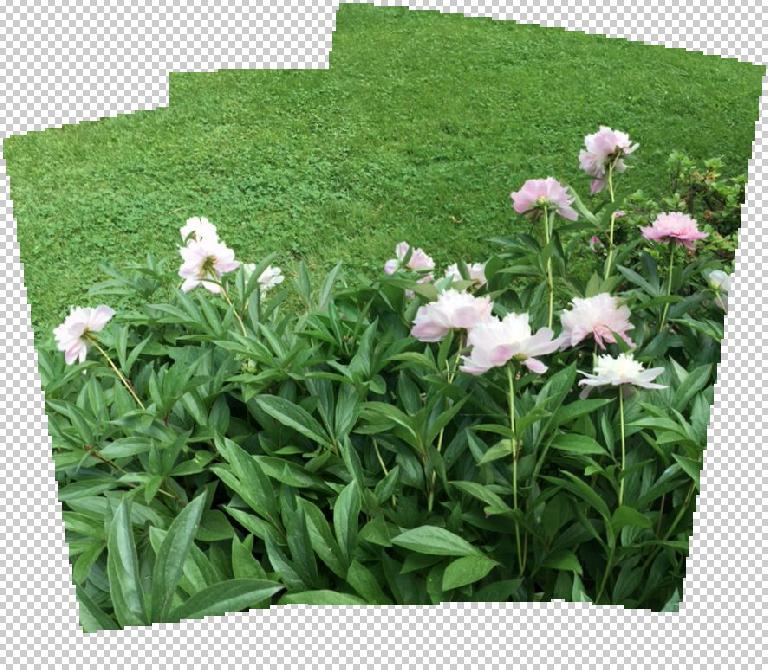 Reposition seemed to have found some additional greenery to add to the image. There is a darker patch in the upper right-hand corner and a patch of what appears to be grass center. I clicked off that center layer to see where it found it and got an interesting hole in my image. It must have picked that up from somewhere since my backyard is more clover and crabgrass than actual grass. (Image 13)

All in all, I was very pleased with this little-used and under-appreciated automated command that has been a part of Photoshop for a very long time. I hope you do give it a chance, since when it works it is a big wow.