All Articles Photoshop
Adobe Photoshop'¦ for Video?
Iain Anderson on Wed, February 25th 0 comments
Language
So you're wanting to edit some video... but the last app you'll think of using is Photoshop, because it isn't a video editor, right? Wrong. Iain Anderson is on-hand to show how deep it can go.

While many use Photoshop, few have explored its use for video editing. And while after reading this, experienced editors will continue with their existing tools, the (very) casual editor might find just enough here to get the job done. Surprisingly, advanced editors might find something of interest here too. Let's get into it.

Begin by choosing the Motion workspace from the drop-down at the top-right corner of the interface. This makes sure that the most common panels for video and animation work are visible. 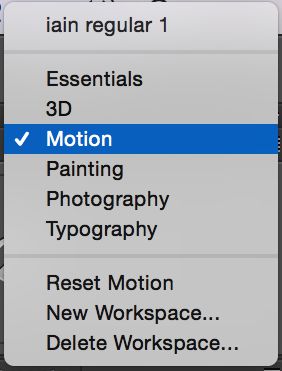 If you've never used workspaces, Essentials will probably be selected.

The main new panel you need to get to grips with is the Timeline panel, which should have appeared at the bottom of the screen. It's inviting you to press a button, so go ahead, choose Add Media from the pop-up that appears, locate a video clip somewhere on your hard drive, then wait for the import to occur.

This dialog won't always appear, but sometimes it can take a short while to import the clip.

You may well be able to play video at this point, though there's a good chance that it won't be 100% smooth. That's OK for now. Go ahead and repeat these steps to import another clip. It should end up after the first clip on your timeline, in the same Video Group, and you can use the zoom control below to scale things down so you can see it all at once.

The timeline here is more or less a simplified copy of Final Cut Pro X's magnetic timeline. If you click near the start or end of a clip, you can drag to trim it, and it will ripple automatically to close any gaps. Similarly, you can drag clips to rearrange them, and you can't accidentally erase part of a clip by dropping it onto another. 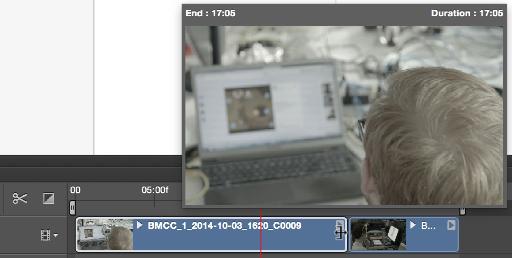 A ripple trim in progress, with a thumbnail showing the current frame.

Another basic command is the Split at Playhead command, indicated by the scissors button.

Click the scissors, and the clip below the playhead becomes two, as shown.

Basic transition support is here too. Clicking the icon to the right of the scissors brings up a small Transition pop-up, and you can drag a cross-fade or other simple fade between two clips. They'll both get a little shorter to accommodate the fade, but there's no warning like in FCP X. 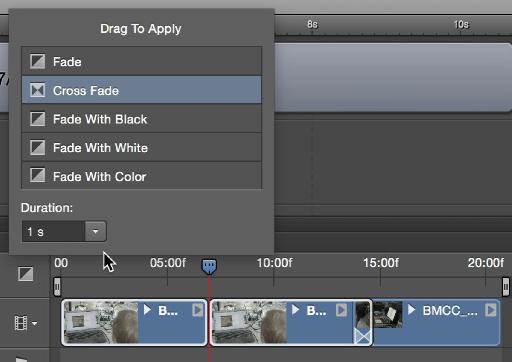 Cross fade or fade through a color? Sure!

None of the basic editing functions are anything worth leaving iMovie for. Still, if you find yourself on a PC (shudder) and a quick job to do, then they could save the day. However'¦

Clicking a filmstrip icon in the Timeline panel lets you create a new Video Group'"effectively another track'"and while you can add new media clips to it if you like, this is probably best used to add titles.

Press T, drag out a new text box, then type in a title. Add transitions and adjust the title's length if you wish. Transitions work with titles too.

There's a title first, then it fades to a bonus random yellow blob for no good reason.

Back in Layers, you can add regular layers to your Video Groups, but they'll be still images sitting on top of moving video. Even a locked-off tripod shot may wobble slightly and ruin the illusion, so for more advanced rotoscoping tricks, like removing the wires from a stunt shot, it's easiest to work directly on the video layers, rather than working on a layer above.

Click on the original video clips in the timeline, then select the Spot Healing Brush Tool. Paint over something you don't want, watch it magically disappear, then drag the playhead back and forth marvel as it reappears in the next frame. You'll quickly realize that rotoscoping can take a while, but do yourself a favor and assign some shortcut keys to the Next Frame and Previous Frame commands in the Timeline panel submenu. 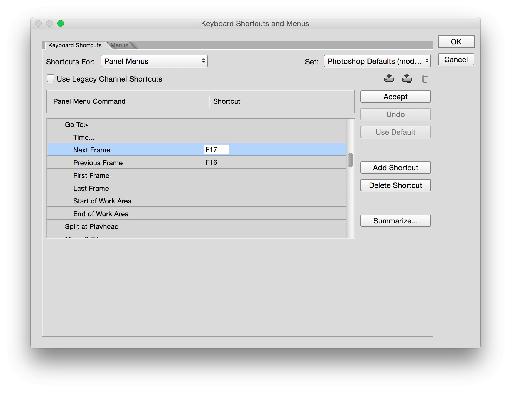 That's Edit > Keyboard Shortcuts, then switch to shortcuts for Panel Menus at the top, scroll down to Timeline (Video), and finally add some keys.

So yes, you can paint on each frame individually, but you really have to want to do it.

Photoshop has long been the go-to color-correction tool for stills, and it's very pleasing to discover that your favorite adjustment layers work on video too.

By default, each adjustment layer you add will be applied to just one clip, by virtue of an automatic clipping mask.You can always duplicate layers and move them to other clips if you want to repeat your settings, or use Layer > Release Clipping Mask to affect all clips at once.

Very interestingly, if you get serious about combining a few adjustments, then you can export a new LUT which can then be applied in other, more capable editors to give you an instant look. LUTs, or Look-Up Tables, provide an interchangeable, mathematically defined color look, and being able to make them interactively in Photoshop is pretty handy indeed.

You can also use existing LUTs as part of the color correction process. Here, I've got a basic LUT applied through the Color Lookup adjustment and a Curves on top, and I'll export them together to make a new recipe. A gotcha, though: to export the adjustments, they must be in a regular document with a Background.

One way to make this happen quickly is to move your adjustment layers into a new file. Create a new document with a white background, drag the document's title out of the tabs to let it float free, click back to your video document, then select the first adjustment, Shift-click the last, and drag them from the Layers panel into the new blank document.

Finally, you can export them safely, choosing File > Export > Color Lookup Tables, then giving a name and choosing the formats you want. While FCP X doesn't have built-in custom LUT support, you can use LUT Utility, mLUT or others to load your custom correction recipe. 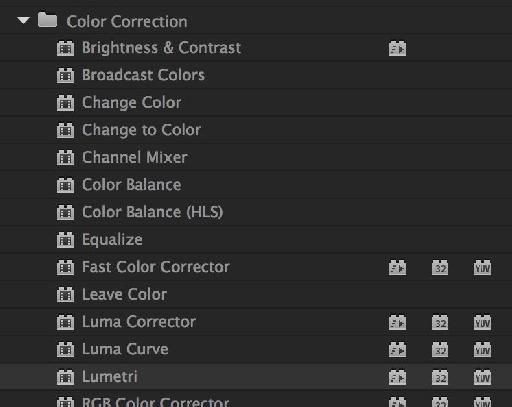 Premiere can load a LUT with the built-in Lumetri plug-in.

Should you prefer to export with Photoshop itself, you can do that too. Choose File > Export > Render Video, then set up the options as you like. 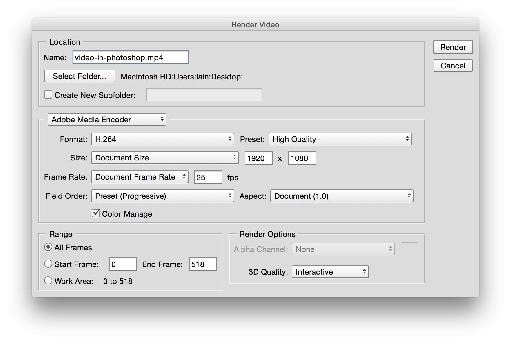 You can choose from a variety of H.264 presets suitable for direct distribution, QuickTime movie if you need alpha channel support, or DPX should you be integrating with a production pipeline. Unfortunately, there's no direct ProRes support, but it's workable.

While Photoshop is not the fastest nor the most capable video editor, it is one of the most widely used programs around. For any serious editing, it's clearly the wrong choice, but for a quick top and tail with a title'"or something a little fancier with color or retouching'"it could be ideal.