All Articles Photoshop
Editing Video in Photoshop CS6
David Smith on Fri, September 28th 0 comments
Language
Not many Photoshop users realise that they can edit video right inside the application! David Smith, Adobe Certified Trainer, walks you through a video editing workflow for web output.

If you are a designer, photographer, web-developer, e-publisher or indeed anyone other than a video editor, who might be required to utilize video content in your work. Rather than start on a new steep learning curve grappling with an editing package like Adobe Premiere or Final Cut Pro, Photoshops video editing workflow is always an option you should give serious consideration to. Why not utilize an application and a working environment you are probably already quite used to to diversify the content you create a bit more?

In this article, I am going to create a simple short video file, which I intend to output to YouTube (seems as likely a scenario as any right?). All in Photoshop CS6. Adobe have updated the video editing workflow in CS6, but this isn't a review so I wont indulge myself on reviewing new features.

Start the editing process by choosing File > Open or press Command-O. Browse for the first video clip you you intend to use in the edit and choose open. 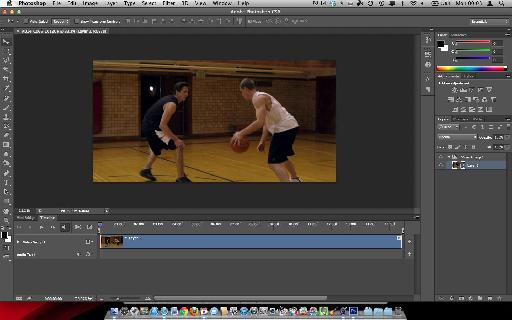 Photoshop will open the clip into its video timeline, placed at the start or 0:00:00:00 frames.

The timeline that is created has been automatically formatted to the standard of the video; Frame Rate, Size, Codec etc.

Step 2 - Add the other shots

Don't be tempted at this point to mess around with the length of the clip you just opened, that's something that as an editor you would do later on. Now add the second shot in your sequence by clicking on the Plus symbol next to the video track called Video Group 1. 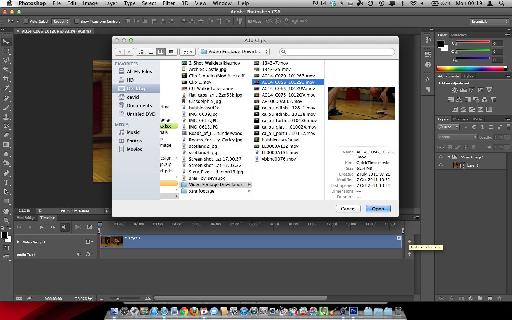 Select the second clip, and click OK. The second clip will be added to the timeline after the first. Continue to add your shots until the basic storyline is in place.

Play the clips. If the shot order might work better after a little shuffling, simply grab one clip with the select tool and drag it before or after the other clips in the timeline, not unlike re-ordering layers. 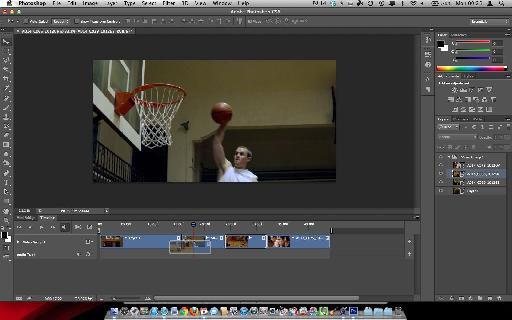 Keep experimenting until the basic structure tells the story you want to see.

It's highly likely that the clips you intend to use are longer than your audience requires. Now that you have all your clips and they are in order, it's time to start to cut away the unnecessary sections. The leaner your edit the more interesting it will be to watch (within reason of course). 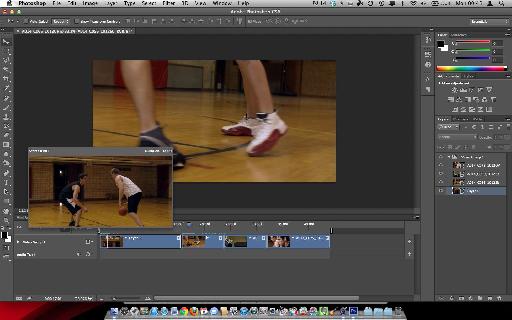 Move the playhead to the head of a clip and when you see the icon change to the trim mode, click and drag the edit point to a more appropriate frame. A preview window pops up to help you find just the right frame.

Tip: Bare in mind when you are doing this that the edit it non-destructive, so dragging too far in one direction can be un-done by dragging back in the opposite direction.

Keep trimming until you're happy with the shots length, this can take a bit of time.

Video Editing involves using tracks (or similar) that allow clips to overlap other clips, making editing techniques, such as using cutaways from other angles, a little bit easier to manage. 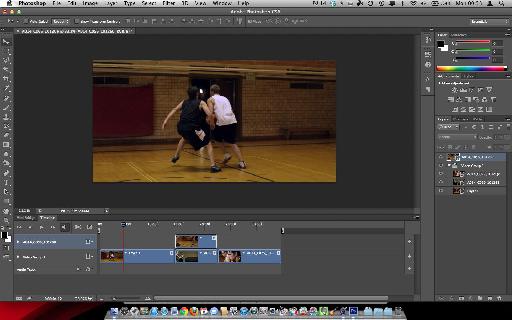 The video 'tracks' in Photoshop are the layers. At present all your layers will be inside the same Video Group. Drag the layer you want to use as a cutaway out from the group and place it above the group in the layers panel. The timeline now shows 2 video tracks, each with clips on them.

Now that clips are overlapping on different layers (tracks) you should continue to utilize the Trip edit mode to tighten up any movements from one camera angle to the other so that the movement between them feels natural and well timed.

Often when you are looking to trim clips, you find that it's a portion of the middle of a clip, rather than the start or the end, that is in need of trimming. This is called Splitting. 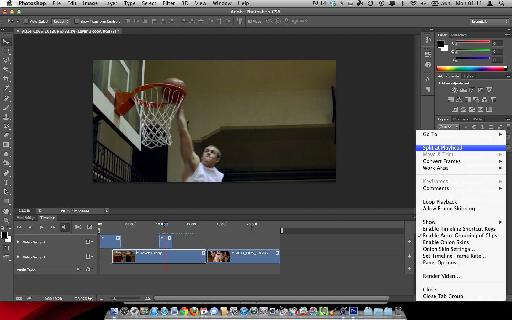 Select the clip to be split in the timeline, and play or drag the playhead to the first point to be split. From the Timeline panels options menu, choose Split and Playhead. The clip will be cut in two at that point. Continue on until the playhead reaches the end of the unwanted clip and do the same.

Tip: You can also just click on the scissor icon in the Timeline panel for the same result.

Now that you have one or more unwanted clips, to remove them select them with the select tool and press Delete. 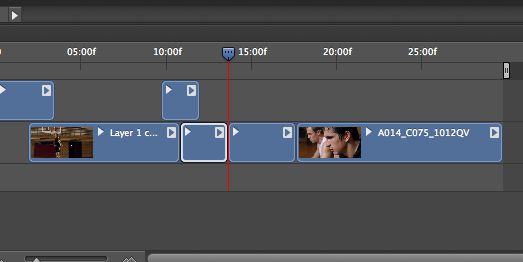 The split selection disappears, and the clips bunch up to hide any gaps that would have appeared.

Transitions should only be used to add to the story, not because they are just there and you fancied using one. In my case, I wanted to slow down a section of the action. To do so I'm adding a long Cross Fade. 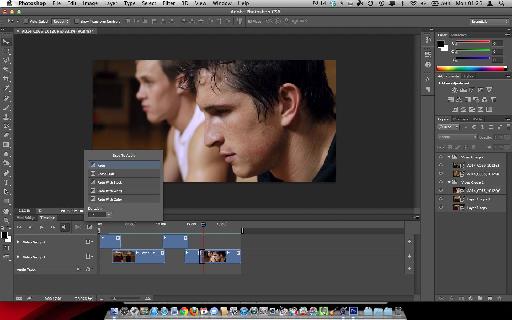 Tip: The clips will appear to shorten due to the overlap created by the transition.

Once added the transitions can be lengthened of shortened to help achieve the appropriate effect. 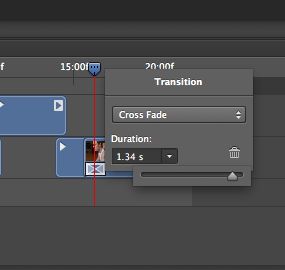 Right Click on the grey transition on the timeline and use the pop up window to adjust the duration or the transition type.

Graphics can be added to your video in just the same way as in any Photoshop image. 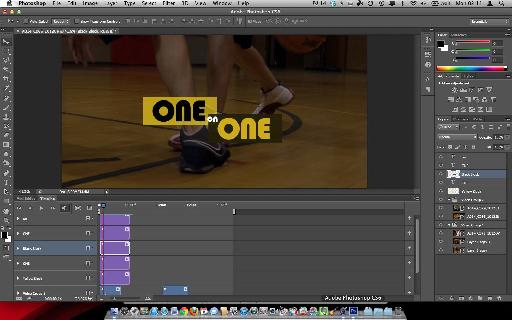 Here, I created new layers by pressing Shift-Command-N and added shapes as well as using the Type tool, press T to create text layers. For each new layer, a new track is added to the timeline.

Once the Graphics are made, and you are happy with them, merge the layers. Select them all and create a Smart Object. That way the graphics merge into one layer, but remain editable at the same time. Keeping graphics down to one layer (track) makes the next stage easier. To add some dynamism to the graphics, make them move on screen. Click on the drop down arrow on the Purple Graphics clip in the timeline. This reveals 3 editable properties: Transform, Opacity and Style. 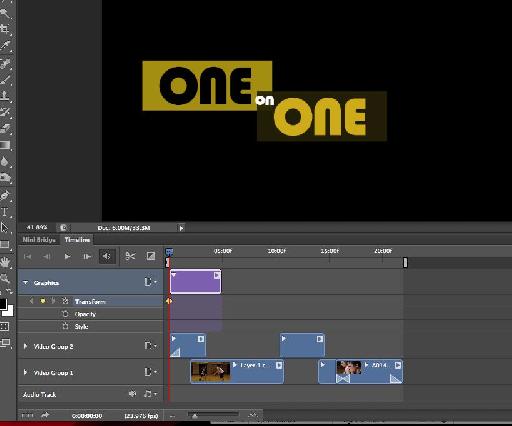 With the Playhead at the start of the clip, click on the Stopwatch icon next to the Transform property. This adds a keyframe that will record the position of the graphic layer on screen. Drag the Graphic image to the left of screen as a starting position.

Move the Playhead to the end of the clip and drag the graphic to the center of the screen. A keyframe is automatically created at this new position. As the playhead travels between the two keyframes, the change in position is animated automatically. You should try experimenting with other properties such as size and rotation for instance. Be careful not to overdo it.

Tip: To finish off the animation, I've dropped in a Fade transition at the start and end of the graphics layer.

Step 15 - Export the Video for you Tube

This part is really easy, though it might take some time. Choose File > Export > Render to Video. Using the menu that pops up, name the file, and choose a location to save to. Photoshop utilizes Adobe Media Encoder to create new videos, it's unlikely that you will need to deviate from the applications preset options, so try not to. For a web video, a format of H.264 is likely to be your best option. The list of presets available is fairly extensive, however as I am creating a video for YouTube, there are presets specifically for that purpose. Select one and set the range to all. Press Render to export the video.

So if you need to cut together video, and you are an experienced Photoshop user, this could well be your best option, rather than struggling with video editing software you are not used to and probably go way beyond what you require.