All Articles Photoshop
Experimental Color Toning in Photoshop CS6
Dan Moughamian on Mon, March 4th 0 comments
Language
Not all photos need look realistic. Often your aim may be to create an interpretative style. Dan Mougamian shows how Photoshop CS6's Curves, Adjustment layer and Blend mode can be your used.

Earlier we took a look at some basic color toning controls in Photoshop Touch. Now let's take a look at what we can do to lend an interpretive style to our photos, using Photoshop CS6, the Curves Adjustment Layer, Blend Mode and Opacity settings, and some judicious layer masking.

For this example, we'll take an autumn colors shot, and then apply a color negative effect as the basis for creating interesting color transitions in the photograph. Typically this type of effect works best on images with a subtle range of colors located in different parts of the picture, so the fact that we have some color reflections on the creek, colorful leaves strewn about, and a bridge as an interesting visual transition point should work for us.

To start we'll use an Adjustment Layer so that we're not making any permanent alterations to our Background layer. Choose Layer > New Adjustment Layer > Curves. Using Curves will give you the most flexibility if you decide you want to make manual adjustments to any of the individual color channels or the composite curve. 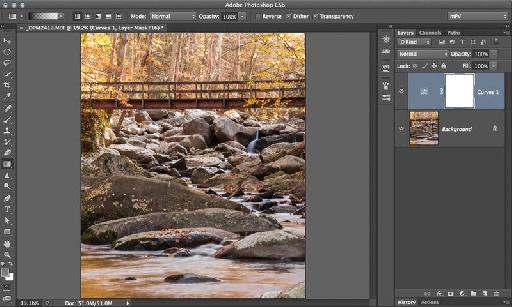 From the Properties panel, open the Curves Preset pop-up menu (the Curves adjustment layer will be selected by default), then choose 'Negative' near the bottom of the list. Note there is a Color Negative preset as well, which will create a completely different look. In many cases Negative will produce more subtle colors (usually a range of light blues and greens vs. dark blues, purples and reds). This is especially the case when the original colors in the photo are in the warmer part of the visual spectrum or heavily saturated from the start. Since we're using an autumn colors shot in this example, the Negative preset is the better choice. 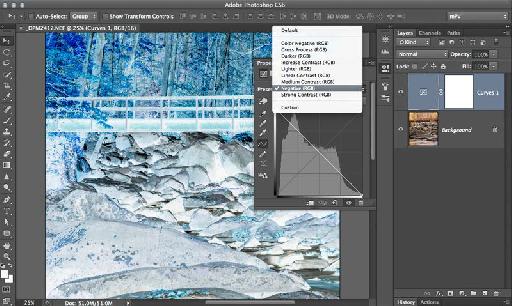 The next step in the process is to 'recover' some of our tonal details and contrast zones by changing the Blend Mode. For this type of workflow I have found the four modes at the bottom of the Blend Mode menu (from the Layers panel) usually work best. Most often Hue and Luminosity provide the most flexibility in recovering some of the important details, while leaving the interesting color shifts from the Adjustment Layer intact elsewhere in the frame.

Here I chose the Hue Mode because it allowed recovery of much of the original tonality and detail in the boulders and some of the flowing water as well. That's not to say it looks like the original pixels but rather it removes some of the 'reversed' tones from the photo negative effect, turning bright spots back to their original mid-tone appearance and re-balancing the contrast in the process.

If you find some of the colors in your shot are over-the-top in the areas where you intend to maintain colors from the adjustment, bump the Opacity slider in the Layers panel down 10-30% to see if that remedies the problem. You can also come back later and do this if necessary. 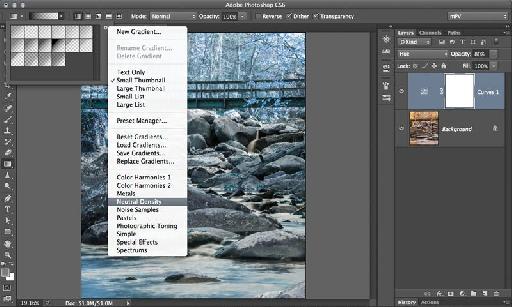 The next step involves either painting away portions of the adjustment layer effect (using the Brush tool and painting on the image with the layer mask selected, using a medium to black shade of grey), or using the Gradient tool to create a smooth transition zone in the photograph. The Gradient tool is a good option if you're trying to create a linear transition between the original appearance of the photo and the new appearance.

Here I used the Gradient tool and the Neutral Density Presets for same. Press G or Shift-G to select the Gradient tool, then from the Options Bar, open the Gradient presets pop-up menu and from the fly-out choose 'Neutral Density'. Typically I will leave the Blend mode for the gradient itself set to Normal, and the Opacity set to 100%, since there are many preset variations of the Neutral Density gradient, including those with a more faint beginning and end point. Here I chose the Preset that moves from pure black (effect completely masked) to pure transparency (effect completely unmasked).

Once your settings are ready to go, you will follow an iterative process of clicking on the spot in your image where you want the transition to begin, then dragging and releasing the mouse or stylus, near the spot where you would like the full effect of the adjustment to start. It may take four or five tries to get the desired result, undoing the previous attempt each time first. You can hold down the Shift key as you drag to create a perfectly straight 'gradient mask' effect, if required for your subject-matter. 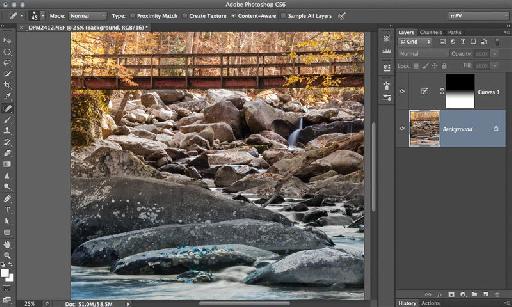 For this shot I started near the base of the waterfall (returning the colors at or above this 'x-y pixel coordinate' to their original appearance), and then I dragged downward to the parts of the boulders (bottom of the frame) that had leaves and moss on them. This maintained the color toning in these areas, and also in the transition zone between the two areas, an effect similar to a black and white photo was created, further enhancing the look of the shot.

Obviously the point of workflows like this one is less about realism than creating some type of interpretive scene. For this case the cold blue tones at the bottom of the frame symbolize a change in the season and temperature. In any case you can see how easy it is to combine Curves presets, blend modes and layer masks to color tone your photos. Give it a shot! 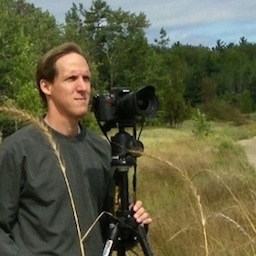 Dan Moughamian
Dan Moughamian is an experienced photographer and Photoshop educator with 20 years of experience. He also has extensive experience with Lightroom, Aperture, Photoshop Elements, and other imaging products. As a veteran member of their testing programs, Dan has collaborated with Adobe Systems to help enhance many of the core functions in Photoshop, Lightroom, and Elements. As an educator, Dan's focus is to help photographers at all levels get the most from their digital workflows. Tips on raw editing, layer masking, alpha channels, image adjustments, HDR photography, focus and lighting effects, and perspective correction, are just a few examples of the topics he covers. Follow Dan on Twitter: http://twitter.com/colortrails Google Plus: https://gplus.to/Colortrails Facebook: http://facebook.com/ColortrailsTips
Related Videos
Comments (0)

Dream It. Do It.
Do you want to learn Photo Retouching and Adjustment?
Yes, I want to learn!
No Thanks, I just want to read the article.
Feedback
How are we doing?
We'd love your thoughts, feedback and questions regarding our new site. All feedback is appreciated!
We do not respond to this form! If you need support, please visit our support page.
Thank you for your input!
Your message has been successfully sent
Course Advisor
Don't Know Where To Start?
Ask A Course Advisor