All Articles Photoshop
Photoshop: Making Color Look Up Tables (LUTs)
Iain Anderson on Sun, June 12th 0 comments
Language
If you want to apply specific film-style looks to your video or images without breaking the bank, then learning how to make LUTs in Photoshop is a good idea. Iain Anderson shows you how.

They’re all the rage, but what are they? Color Look-Up Tables, or LUTs, are essentially a color treatment wrapped up into a black box. Your original video goes in, and a treated video comes out the other side. They have two main uses: to correct a Log-style flat image to something more “normal” like Rec709, or to apply a “look” to your footage to make it warmer, cooler, or something far more subtle. Specific LUTs to emulate certain film stocks have become very popular among those who want the look of film without the expense, but you can do almost anything with them. The great news is that they’ve never been easier to make, and Photoshop is a great place to start. 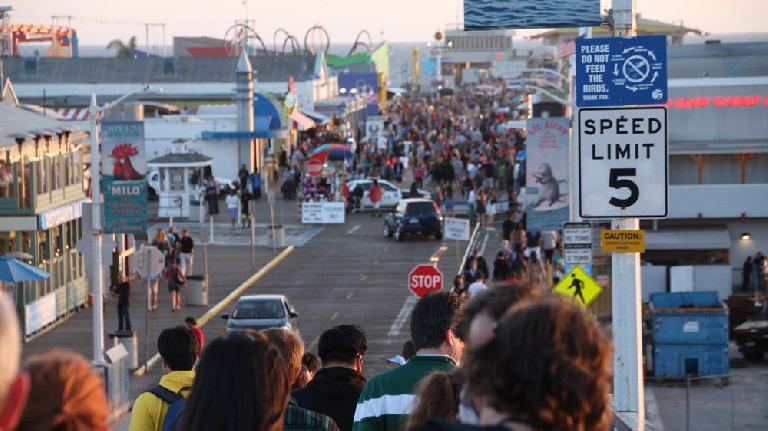 You’ll need a simple, flat image with a Background layer to get started, so take a look through your photo library and pick one or a few representative images out. You could also export some stills from your video work. Make sure it’s a relatively neutral image, and if it contains a wide variety of colors, all the better. A portrait of a person would be a good idea if you want to produce a LUT that behaves nicely with skin tones.

Another handy strategy: export a reference image from a specific clip, and you can produce a LUT designed just for that clip. No matter which way you go, the image is just a reference—your photo won’t be included in the LUT itself. 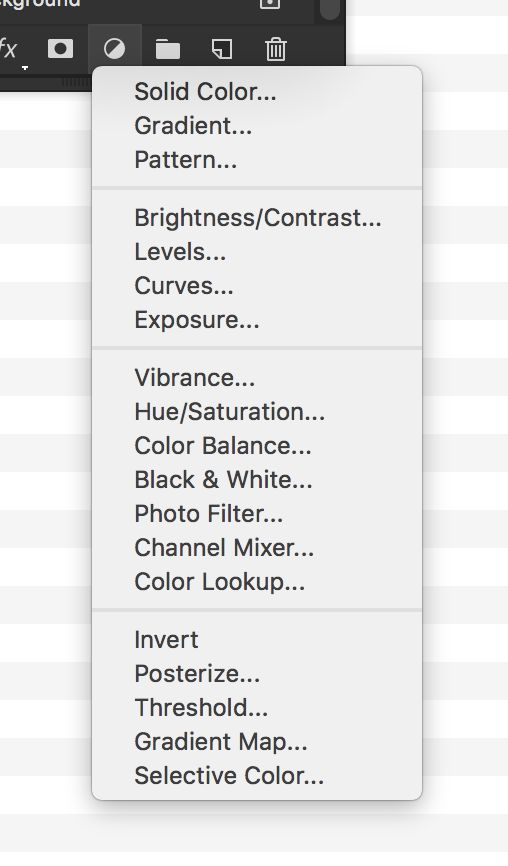 To make the process work, you add a variety of Adjustment Layers, tweaking each one, then export them all together into a single LUT. Which adjustments are worthwhile? Levels are a simple way to correct color casts, while Curves are more powerful and subtle. Hue/Saturation has some sneaky tricks to play with color, and Channel Mixer can pull the sneakiest tricks of all. Let’s take a look at a few useful recipes.

Some of the most useful curves are basic S-curves in a variety of strengths. From the Adjustment Layer menu (the yin-yang/black-and-white-cookie menu at the bottom of the Layers panel) choose Curves. In the Properties panel that appears, drag one point up in the highlights, and another point down in the shadows, so the curve looks like this. 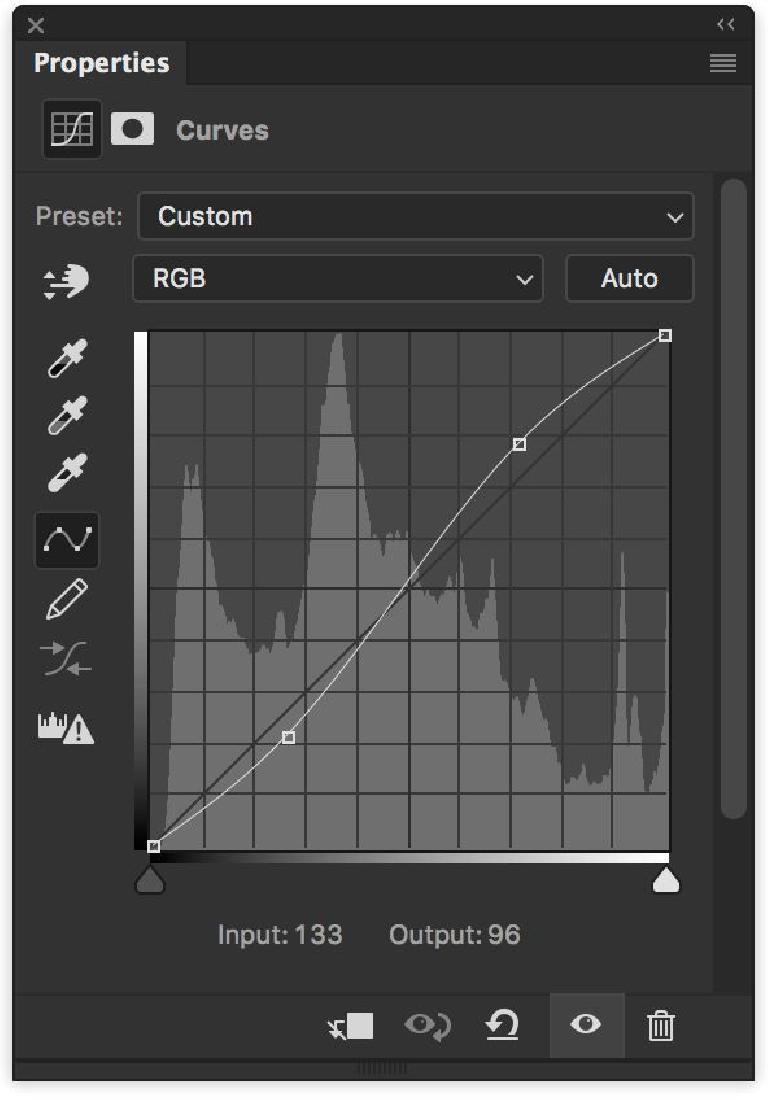 Contrast adjustment without shifting black and white points is something you can’t do with the color board in FCP X, so this should be the first thing you make. To save it, choose File > Export > Color Lookup Tables. Give the LUT a better name, then select and copy the name. Choose 32 Grid Points from the slider if it’s not already selected, and choose only “.cube” as the export format. Press OK, paste the name you copied in the next dialog, and finally save. (Even though “.lut” is shown as the filename extension, it’ll be saved with “.cube”.) 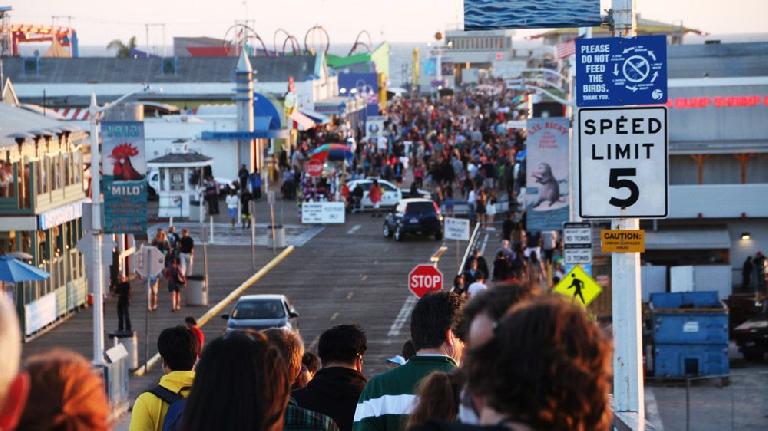 A simple curve does a lot to increase contrast.

A good idea now is to create a selection of Curves adjustments to perform a variety of tasks: boost shadows, boost highlights, reduce highlights, crush shadows, reduce midtone contrast—it’s really just limited to how much time you have, and how much you love Curves. Double-click on the name of each adjustment layer to name them as you go, and turn off any layers you don’t want to be included in each LUT.

Be sure to save your Photoshop file to keep a record of your work, too. 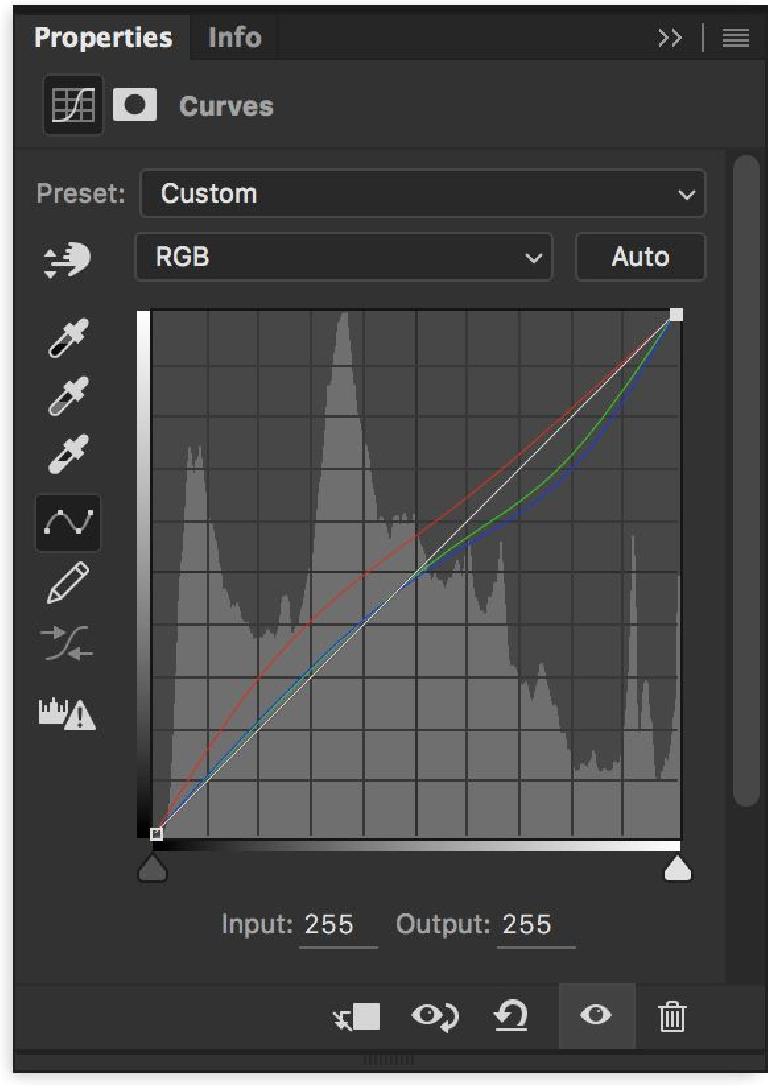 The Red, Green and Blue curves overlay the basic one

It’s often overlooked, but you can adjust the individual red, green and blue channels in Curves too. Boost the shadows in red and reduce the highlights in green and blue for a warm nostalgic vibe, then mix in a global RGB adjustment if you wish.

Flip those individual channels around, or turn the boosts into S-curves or anti-S-curves for something different. This effect can be a lot more complicated than it appears at first glance.

Once you’ve made a few Curves, turn them off, and add a Hue/Saturation adjustment. A simple change  with the Hue slider here can fix some white balance issues, and knocking back the Saturation can help it to feel old. Still, the really interesting things happen when you change this adjustment to adjust only part of the image.

There’s a drop-down menu marked “Master” from which you can choose Reds, Yellows, Greens, Cyans, Blues or Magentas. Each one activates a set of movable sliders at the bottom of the panel, letting you control the range of affected colors and how softly that range falls away. Critically, each range can be changed, so these options can overlap as much or as little as you need them too. You could  boost saturation on the reds and tint them towards orange, and at the same time, desaturate the blues, and shift the blues and greens more towards yellow. If you set it up right, this can be six adjustments in one, and it’s analogous to the six vector controls found in some correction tools—except with changeable color ranges.

The Luminosity control here is a sledgehammer, so it’s best to use it sparingly. For global brightness adjustments, stick to Curves. If you want to combine more than one adjustment layer, go ahead—and keep them together in a named Layer Group for ease of organization. 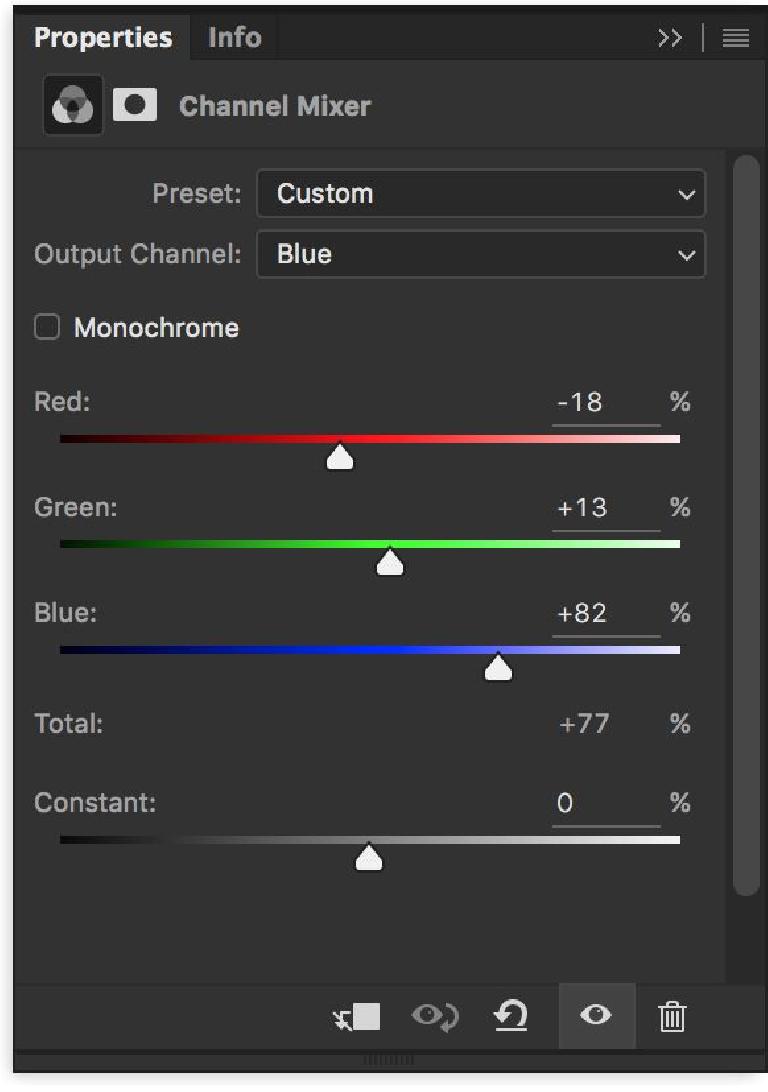 Just one of many options with the Channel Mixer.

The Channel Mixer is one of the most powerful and least understood adjustments. Used wrongly, it’s a great way to trash your image, but used well, it can pull off tricks nothing else can. Critical here is the output channel, and when you first add it, Red is the active Output Channel. The sliders below govern which parts of the image will go towards the Red channel, and the default settings don’t change the image at all—Red is made from 100% Red. However, if you increase Blue and decrease Green here, you’ll be adding to red data where the blue is, but taking it away where the green is. Yellow objects, made of red and green, will become decidedly greener.

Because this tool can invent information where none was present, it can rescue images which are shifted towards a single channel: it’s subtle, weird, powerful, and worth a good play. As before, add a Curves layer for best control over exposure and contrast, and keep everything neat in a named Layer Group. If you’re short on inspiration, you can start out with any existing LUT and build from there. From the Adjustment Layer menu, choose Color Lookup. The Abstract menu here has a few built-in choices, but to load a custom LUT, choose 3DLUT from the menu, then navigate to an existing LUT. You can also then use the drop-down menu next to “3DLUT File” to choose from a selection of built-in LUTs, including some nice film looks. On top (or below) add Curves or any other adjustments and then export the set to a new LUT.

Load up a LUT with LUTx or mLUT, but probably not both at once.

Using LUTs in your edit

Now that you’ve got a collection of LUTs, you’ll be able to use one of the many LUT loaders in FCP X (or the Lumetri panel in Premiere Pro) to use these corrections in your edits. For free, you can load your own LUTs with motionVFX’s mLUT or a free effect that’s part of CoreMelt’s LUTx. Color Grading Central also offer the paid Color Finale and LUT Utility. Apply the effect to your clip or adjustment layer, locate the LUT you saved earlier, then dial the look back if needed.

LUTs are a great way to get a look quickly, as well as a way to neutralize footage from several different cameras. Creating your own LUTs in Photoshop is the best way to transfer your existing Photoshop corrections into the world of video, but be warned: collecting LUTs can be addictive. Good luck! If you use Affinity Photo, you’ll see this cute kitten as you save your LUTs.

Note: Affinity Photo users—you can take part too. Use Adjustment Layers as usual, but use File > Export 3D LUT to make the .cube files.