All Articles Premiere
Getting Super Speedy with Premiere CS6 Dynamic Trimming
David Smith on Sun, May 26th 0 comments
Language
The more you work in an NLE, like Premiere Pro, the more you'll want to cut back on repetitive tasks and generally speed up your workflow. David Smith is here to help you do exactly that when editing.

One really glaring omission from Premiere Pro in the past has been the ability to trim edits dynamically in the timeline, relying instead on the Trim Panel for this workflow. That's not that big a problem I hear you say? Well no, I agree... except for the times you're trying to make your keyboard combust with the speed of your edit, then it's huge.

So let's have a little wander around this really useful new addition to the Premiere Universe (I'm planning lots of Galactic references in honor of Curiosities adventures on Mars).

If you have a project already, great! If not, quickly cut something together, making sure your clips have handles of course, so that you can trim them. 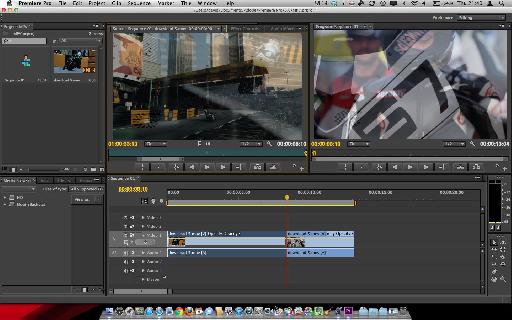 The Dynamic Trimming mode is very easy to activate. Right-click on the edit point between the clips and a drop down menu appears, listing all the dynamic trim options. 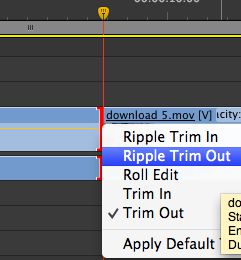 Choose RippleTrim Out to ripple the out point of the outgoing clip. To switch on the Dynamic Trim window, double-click on the edit point.

The Dynamic Trim Window opens in the Program Window, displaying both the out frame and the in frame. The edit to be trimmed is indicated by a blue bar. 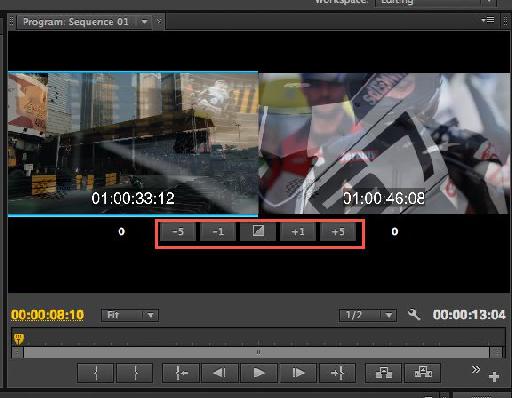 Swap to the Incoming clip by clicking on the it in the Dynamic Trim window, so it turns blue. This time instead of using the preset buttons, use Option-cursor left to move back 1 frame, or Shift-Option-cursor right to move forward 5 frames if you prefer shortcuts.

Place the cursor between the two clips in the viewer, you will see it turn red, and indicate the Roll tool. Click and both clips turn blue, so both points will be edited. 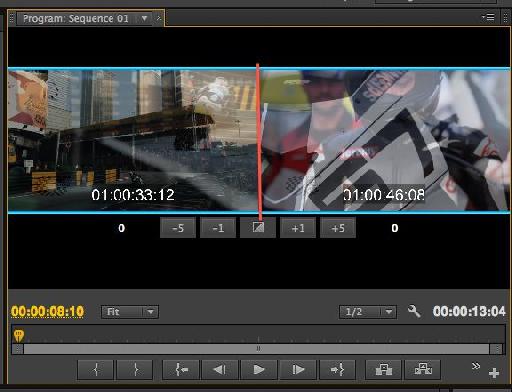 Forget the Preset buttons, or the keystrokes. This time we will use J,K and L instead, and I have to admit this is my preferred method. To Roll the two edits 1 frame to the right, hold down K and press L one time. You can repeat this keystroke as often and as quickly as you are able. Using K and J instead moves the edit one frame left.

If you're feeling brave, try pressing J or L so that the clips play, when the time feels right press K to stop the playback, and watch as the edit points Roll to the frames you stopped on. This technique allows you to edit in real time as you watch, which is a very slick method to use.

If you are lucky enough to know exactly how many frames the edit needs to Roll by, and in which direction before you start trimming, then you can use the Numeric Keypad to insert durations. Type +1 to move 1 second to the right or -12 to move 12 frames left and so on. As I said, if you're lucky, it wont happen often.

Step 7 - Add a Transition and Review

Click on the transition button in the Dynamic Trim window to add the default transition to the edit point. 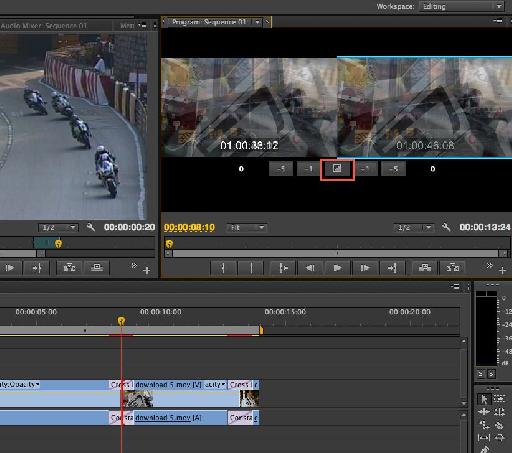 Press Spacebar at anytime to play a preview of the edit you are making.

Step 8 - Move to the Next Edit

Now that edit is perfect (you can't move on until it is OK?), press Cursor Up or Cursor Down (Page Up or Down) to move the Dynamic Trim Window onto the next, or back to the previous edit in the Timeline, and start again.

This really is a welcome addition to Adobe Premiere Pro, and even though the Trim Window is still available, I'll be sticking with this from now on.