All Articles Guitar
Guitar Tips: EQ Filtering
Rich Tozzoli on Sun, June 30th 0 comments
Language
You've recorded your guitar and now it's time to process and refine the recorded sound. But where to start? Rich Tozzoli discusses using EQ, one of the most powerful ways to filter your sound.

High-pass and low-pass filtering with an equalizer can be a very powerful, yet simple production technique. But before we get into the beef of the issue, let's step back and look at exactly what filtering is, when it comes to audio equalizers.

It's actually quite simple. Either way, they both do the same thing '" selectively reduce the level of frequencies below a chosen '˜cutoff' value. Note that this type of filtering is only used to cut frequencies. There are other types of filters such shelving filters, which can be used to boost frequencies. But we'll explore that in another article. 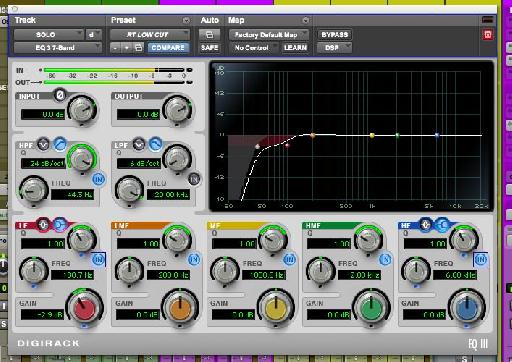 Let's start with the low-cut/high-pass explanation. As you can see in the example above (a standard 7-band Pro Tools EQ III), the HPF (High-Pass Filter) Band Enable button is selected (IN). The selected '˜cutoff' frequency (FREQ) is 44.3 Hz. That is the approximate point where the gain reduction begins. Also, the blue High-Pass Filter button is enabled.

The next control you will notice is called the filter slope, commonly referred to in dB/octave. The various values you can select are 6, 12, 18 or 24 dB/oct. Simply put, the higher values, such as 24 dB, will create a sharper/steeper curve at the selected cutoff frequency (44.3 Hz in this example). The lower values, such as 6 dB/Oct, will create a gentler cut and curve.

Therefore, if you want to cut more bottom out of your mix, use the steeper curve of say 18 or 24 dB/oct. If you want to keep some frequencies below the cutoff, use a gentler setting. Also, you can easily move the cutoff frequency up or down (from 20 Hz to 8 kHz) to cut out almost everything but the highs (when set to 8 kHz).

In this example, I used the low-cut Filter to take the rumble out of a vocal pass '" you know '" the sound of feet stomping by the mic stand. Its also great to clean up guitar parts (removing the unneeded low frequencies) and even on kick drums (to tighten up the bottom). 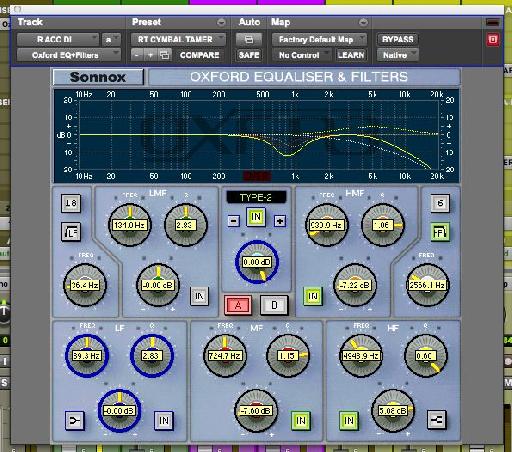 In this example, you can see the equalizer has its HF selected (High Filter), enabling the high- cut filter. The button above it is set to 6 (db/oct). Therefore, as we learned in the example above, the curve of the cut will be gentler (notice slope of the yellow line is not as steep as the 24 dB/oct cut from above EQ III). The Freq rotary knob is set to 2566.1 Hz, or about 2.5kHz.

In this example, I have the preset saved called Cymbal Tamer, and that's just what I used it for. By gently cutting some of the highs with the high-cut filter, I'm smoothing out the edge of this particular cymbal track. I also sometimes use high-cut filters on  acoustic guitars '" when you hear too much fret noise/squeaks. I will also use it in just about every session on bass, to smooth out the overall sound and clean up any unwanted edgy frequencies. I would typically use a higher dB/oct slope, so that the curve is a bit sharper. The steeper slope would be removing more of the high frequencies- leaving me a nice, smooth bass sound.