Pro Tools now comes in two basic flavors, Pro Tools 10 and Pro Tools 10 HD. Both provide a 64-bit floating point summing mix bus (with 32-bit floating point plug-in processing), and this is the same whether you are running natively (without any dedicated hardware) using the HD Native card, or the new HDX hardware. When running Pro Tools HD 10 on HD or Accel core cards the summing mix bus will revert to 48-bit fixed point (with 24-bit fixed point plug-in processing). What does this all mean? And how can you use the facilities provided by the Pro Tools mix environment to maximize the audio quality of your sessions? 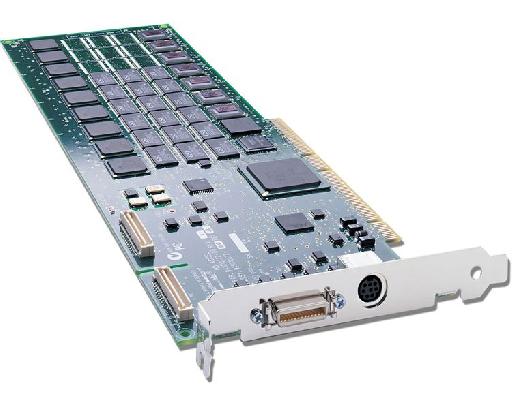 It is not the purpose of this article to go into the mathematics behind these systems, but it is important to know that all systems provide a huge amount of headroom in their mixers, for the purpose of combining signals. Where 24-bit recording technically offers up to 144 dB of dynamic range (in reality limited by the performance of the analogue to digital and digital to analog circuitry in your converters, which is usually of the order of 110-120 dB), a 48-bit fixed point mixer offers up to 288 dB dynamic range. And because of the way the maths works 64-bit floating point systems they offer considerably more than the 384 dB that a 64-bit fixed point system would have, according to the "6 dB per bit" rule of thumb.

Considering that each time you sum two equal signals the total level rises by 6 dB, you will need to mix together a lot of channels before you clip any of these internal mix buses. In fact, starting with a single track and doubling its signal 9 times would require 512 tracks of the same signal, and this would "only" require 54 dB of headroom above the level of the original signal. Although all systems have plenty of room in the mix engine for summed signals, Avid obviously considered too prudent to raise their game to 64-bit floating point to cope with the demands of summing up to 768 audio tracks, 512 Auxiliary Input tracks, 128 VCA Master tracks and 128 Instrument tracks in the Mix bus! 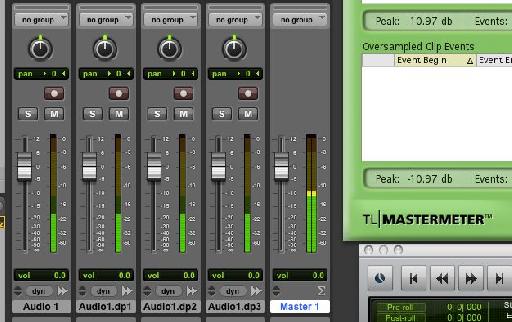 The TL Mastermeter shows a peak signal level in the mix buss of -23 dB with one channel of continuous tone, -17 dB with two channels of the same tone, and -11 dB with four channels; each time you double the signal, the level rises by 6 dB

Perhaps handed down to us from the dark, early days of digital recording, the practice of maintaining tracking levels right up to 0 dBFS is still commonly seen, despite the fact that 24-bit recording offers a noise floor some 48 dB lower than that offered by 16-bit recording, and lower than the ambient noise found in most studios. There are several reason why tracking at these levels is a bad idea. For starters, inter-sample peaks in the analog waveform may well exceed 0 dB without you even noticing. Summing audio tracked at these levels may result in distortion caused by overloading the main output, or some part of the signal processing chain, but here is where the Master fader can come to your aid.

The simplest implementation of a master fader is as the final object in the signal chain before the DAC. 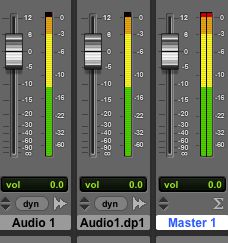 Two tracks whose signals have been tracked up to 0 dB are clipping the output, as shown Master fader meter 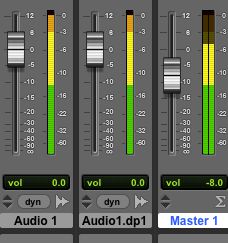 Aux Input tracks are typically used as buss returns in one of two scenarios:

In both cases signals are combined in a bus, which in a native or HDX-based system has plenty of headroom. But in an HD hardware-based system, an auxiliary input track only has 24-bit fixed resolution so using a Master Fader to control the level of signal entering the Aux Input track allows you to avoid the distortion that could be caused at this potential bottleneck. 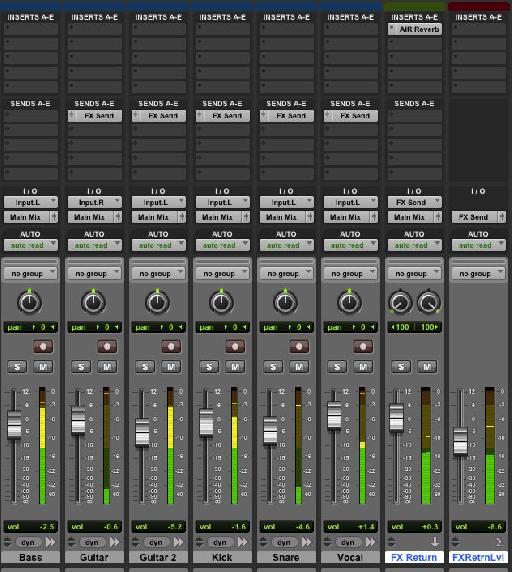 In this example the Master Fader (labelled FXRetrnLvl) is being used to scale back the signal in the FX Send bus (which is the sum of all the sends from the various channels) before it hits the Aux track (labelled FX Return). The Master Fader is performing the same role as an Auxiliary return control on a mixing desk; the Aux track fader controls the level of signal passed back to the Main Mix bus. 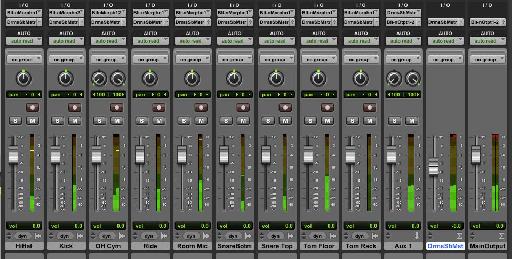 In this example the Master Fader (labelled DrmsSbMst) is controlling the level of summed signals entering the Aux channel, which is then passing the signal to the main output

What the Master Fader is actually doing is scaling the bus signal (48-bit fixed in an HD hardware-based system) to fit into the 24-bit resolution of the Aux track object. So here is another reason why you might not want to track at high levels: Yes, the mix engine has the headroom to cope, but at some stage you are going to have to scale back to 24-bit anyway with the corresponding loss of data that is necessary. It's quite possible that this process will degrade audio quality, and in different ways depending on which mix engine you are using. Tracking at lower levels will result in a summed signal that requires less downgrading (in terms of bits and therefore sound quality).

Mike Watkinson
Mike has been obsessed with music software since he first saw Fairlight's Page-R, and has tracked its development through his work as a performer, composer and producer. As a writer he has contributed articles to Sound On Sound since 1999, and currently writes their Apple Notes column. As well as being a certified Logic Pro and Pro Tools trainer he is also an Apple Distinguished Educator.
Related Videos
Comments (4)