All Articles Recording & Production
5 Alternatives To A Human Drummer
G.W. Childs IV on Wed, October 5th 0 comments
Language
So you want your drum tracks to sound convincing... or at least good? But you don't have a drummer to hand and your own arrangements leave a lot to be desired? Here are 5 viable alternatives.

Whether the need is for live performance, or for studio recording, a real, warm-blooded, honest to goodness, drummer is hard to beat. But if you do not have one, thanks to modern technology, you’re not entirely out in the cold. There are, in fact, some great pieces of software out there that really can fill in, in place, of a real drummer. In my opinion, it’s actually a combination of a couple of pieces of software that actually do the trick. In this article, I’m not only going to give you a list of things you can buy, but I’d also like to talk about how some of these pieces of software can work together to really make you feel like you’re being supported by a cognitive drummer that can hold his own.

1. WaveDNA Liquid Rhythm (The Brains of the Bunch) 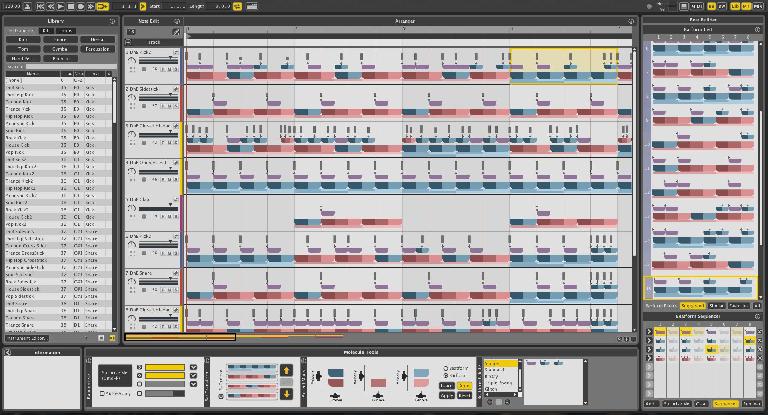 Okay, you’re going to have to bear with me for a second, as this part of the article requires a little explanation. Liquid Drummer (Now, Liquid Music) is not necessarily the world's best sounding drum device, in comparison to other more well-known software drum instruments, and components that are also mentioned herein. However, it does one thing that no other drum based VST, AU, RTAS, or any other plug-in/DAW will do. It arranges drums, and creates patterns in real time, via MIDI, that are so amazing, while still being original, that it almost doesn’t make sense.

MIDI Loops, when it comes down to it, are just as important these days, as the sounds, effects and mixes that make up one all-encompassing kit. After all, being able to trigger drums is one thing, being able to play, or sequence a really good pattern is another. Liquid Music, especially the Liquid Rhythm component of this package, gives you a means to effortlessly build MIDI drum performances with crazy timings, velocities, and in such a basic manner that you literally can have a MIDI drum performance finished, visually, before you ever get a chance to actually hear what it sounds like... And, it’s still, in fact, intricate and random enough to sound like a real drummer actually played and performed through the performance.

Granted, it is a little like learning to reread music through a very simple method understanding patterns and colors. But if you get it down, you can use Liquid Rhythm’s MIDI to control some of the other more well-known drum plugs and devices I’ll be mentioning throughout this read. Don’t take my word for it, though. Try the demo and see for yourself. I would’ve never believed it, till I tried.

I would also say that Liquid Rhythm, alone, and especially if you already have a DAW like Reason, or Ableton Live, might just be enough, before going out to buy one of the more well-known drum plug-ins. But I’ll explain as I go along. 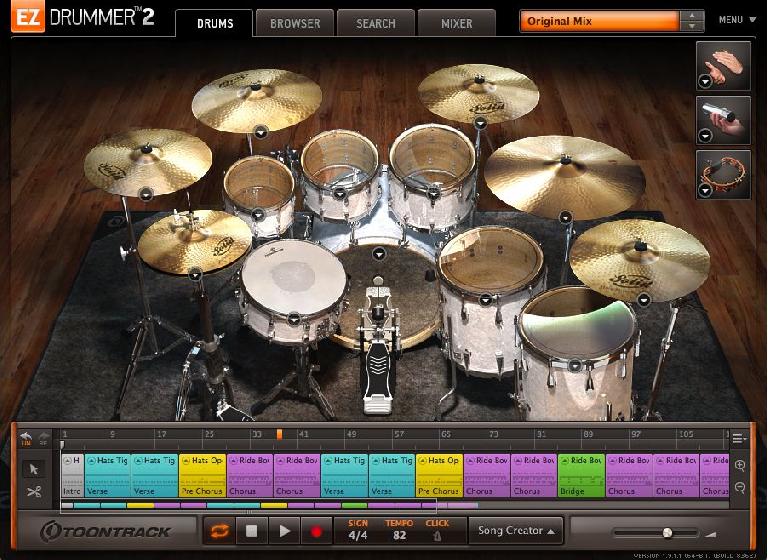 I have an immense amount of respect for Toontrack. They have built two amazingly powerful drum platforms, those being EZDrummer, and Superior Drummer, while also giving their customers a cool and clever way to upgrade with new ‘kits’, ‘Drummers’ and sub-mixes. Additionally, these instruments are filled with astounding MIDI performances by some of the greatest session, studio and pro-level drummers in existence, bar none. It’s literally like they give you the kits, the drummers, the room, and the sub-mixes. If you’re still only a few years into music software, or you’re just new altogether, I’d strongly recommend going with EZDrummer. The kits already sound great, and can be triggered via your own MIDI controller, and they have a ton of MIDI loops, if you don’t really feel like being a part of the performance. However you use it, the gorgeous art and simple workflow can make you feel like there actually is a drummer in the room with you.

I would also like to say that the Toontrack online support is amazing, and they give you a lot of power over the software you purchase from them. Try EZDrummer, or Superior Drummer, in an Ableton Session with Liquid Rhythm/Music= Drums on crack that sound real, blow your mind, everyone else’s—Spiritual awakening! 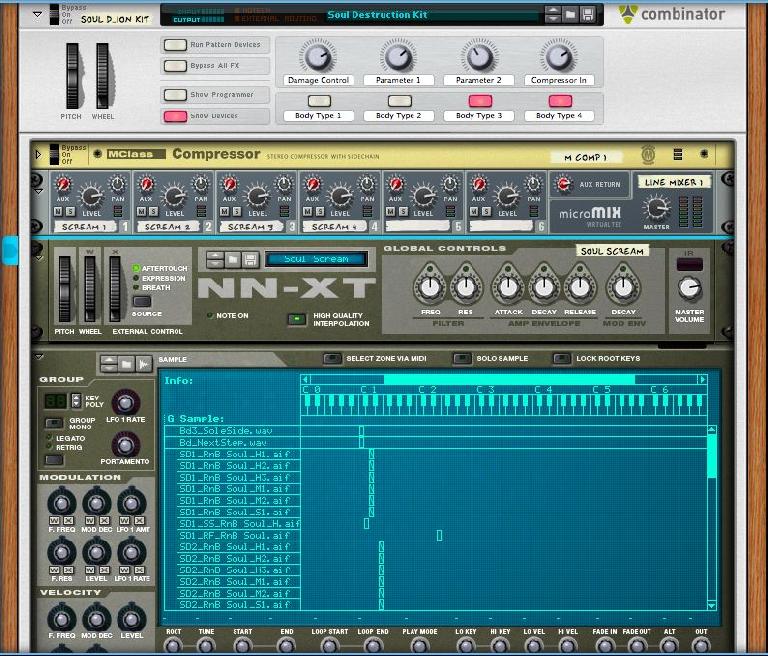 I would be a liar if I didn’t have the NN-XT in this list. At some point in his career, an electronic musician must choose a sampler to do some of his bidding in creating live mappings for MIDI drum pads, live sounding patches consisting of multiple velocity mapped drum samples, and even simple ‘on the fly’ drum patches made during jam sessions. When I gave up my Yamaha A3000 Sampler, years ago, it occurred to me that I might want to move to a software sampler I knew was going to be around for a while. And the NN-XT turned out to be just the one.

At first, the simple interface and old school design might be intimidating. But when you get to know the NN-XT, you’ll find a quick, elegant sample device that lets you build and sample, in real time, in a way that can become very effortless, over time.

With the Combinator, within Reason, the NN-XT can be replicated many times over. I have many Combinators that have multiple NN-XT’s, within for just a snare drum! And, even with that kind of strain, on stage or in some really hairy situations, Reason and it’s little sampler always held up.

In addition to just being a powerful tool for creating real, and amazing drum patches and performances, Reason also has a serious sample library built-in that already has a lot of great samples. But, in addition, the Drums Refill, from Propellerheads, for Reason, is an amazing upgrade. Also, pretty much every third party sound designer offers a Reason format for drum libraries. It’s a gift that keeps on growing.

Ableton Live’s Drum Rack, admittedly, over the years, has stolen some of my Reason drumming time. While definitely taking a nod towards the Combinator, the Ableton Drum Rack has become a means for many third-party developers to create some killer drum patches, performances and even environments that have gone on to be used in all manner of multimedia.

Liquid Rhythm actually has an amazing relationship with Ableton’s Drum Rack, wherein it can actually keep track of drum assignments within its own interface, and make AI based suggestions on sub-patterns you could assign for that kind of patch, based on sample time and name. And as Liquid Music can reside comfortably, and run along with Ableton Live, through Max... Again, it’s like drum Nirvana. I’ve never built such original drum performances that groove so well, so quickly.

Ableton, on its own, in my opinion, could easily fill the shoes of a human drummer, as looping realtime MIDI, and audio performances is, at the core, what Ableton is all about. 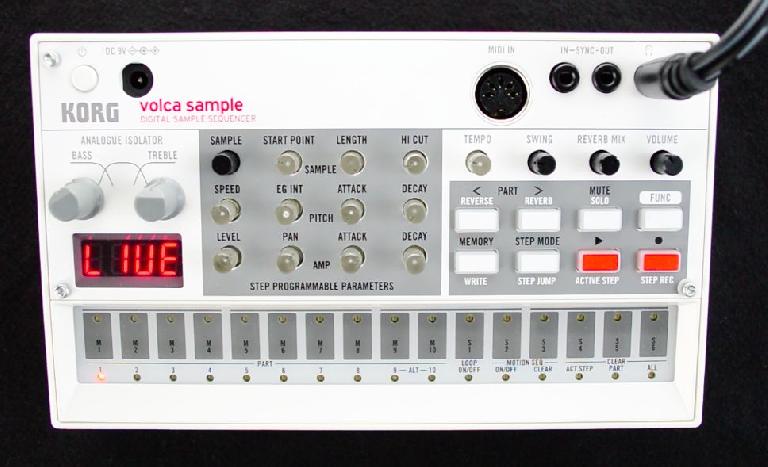 It may not be as advanced, or as exciting as some of the software devices listed above, but volca sample offers something that I really treasure... My sounds, on the fly, with easy sync. I can roll over to my buddies' houses, and into live stage situations with my volca sample, and get sync going quickly with Korg SyncKontrol, on my iPhone. It’s also really easy to get samples into volca sample! There is an awesome app for the iPhone, called AudioPocket, which is free. And there are a few third-party apps for the Mac and PC, that allow you to create beats, import samples, and a lot more, into volca sample. It’s definitely not the best drum machine on the market, but for my purposes, it really is handy in regard to size, sound and definitely reliability.

Because it is a sample playback device, I love that I can use either real, acoustic sounds, played the way they are meant to be. Or, that I can totally manipulate what is either acoustic, or electronic, and make it something totally new, on the fly.

Editor's Note: G.W. Childs isn't a Logic Pro X user. Like many of you reading, I am. So I wanted to give Logic Pro X's Drummer an honorary mention here as it is a fantastic, and fairly intuitive, way to add real-sounding drums with a human feel to your compositions. Of course, being built-in, you need Apple's Logic Pro X to use it.

There you have them: My suggestions for replacing a hardware drummer. There are, of course, many other ways of doing this, but if you’re looking for great sound, with long term, bang for your buck, give some of the ideas here a gander. And if you’re into some really nice, tight, unbelievable drum patterns, make sure you have a look at Liquid Music/Liquid Rhythm, at the top of the list. It really did change my life.