Modern DAWs provide so many cool tools for music production that it’s not uncommon for entire projects nowadays to be completely done in-the-box. But when the time comes to record the vocals, that’s one of the few parts of modern production that still has to be done old-school, with analog gear—microphones and headphones—and the tried & true techniques of traditional recording. For those new to the art & science of recording vocals, here are a few Tips for capturing that perfect vocal take..

Tip 1 - Use Condenser mics for recording

The choice of microphone is an important key to capturing the best vocal quality. On stage, most people use the familiar handheld vocal mics that you see everywhere, the Shure SM-58 being the most common choice by far.  These types of mics are classified as dynamic mics. They use a magnet and moving-coil design to capture the sound waves at the mic’s diaphragm, and as a result they’re very rugged. But dynamic designs, while providing excellent sound, often lack that extra degree of clarity and openness that you’d want for a studio recording. In the studio, it’s more common to use condenser mics.

Condenser mics utilize a lightweight charged plate as a diaphragm, and this endows them with better transient response, and a more open, airy, sound quality—perfect for capturing the subtle nuances of the human voice, in all its variety. Large-diaphragm, “side-address” condensers are the usual choice for serious vocal recording, and high-end models can cost thousands of dollars, but nowadays there are plenty of reasonably-priced alternatives that any small studio or home recordist can afford.

On the lower end, $100+ will get you a decent-sounding budget condenser, that will still have some of that characteristic openness, while $300-400 mics will bring even more of the condenser clarity and detail to recordings.

Fig 3: Some lower-priced and medium-priced condensers.

Tip 2 - Maintain the proper distance from the mic

Vocal mics are usually directional, or cardioid, designs, which pick up sound best from the front, and mostly reject sound from the rear. Every singer knows instinctively that on stage, you hold the mic as close to your mouth as possible. This insures that the voice is strong, and any other sound in the room that might be picked up is much weaker due to greater distance from the mic, resulting in a well-isolated vocal signal. Isolation is, of course, even more important in the studio, but keeping the mic an inch away from the performer’s lips is not a good choice there, especially with the typical studio condensers that are usually in use. Directional mics are subject to a number of issues when used up-close, and one of them is the proximity effect—the bass response will be enhanced (boosted) significantly when the sound source is very close to the mic’s diaphragm. Announcers use this to great effect—it can help them get that deep, booming, voice-of-authority sound, but for a studio recording, where the clearest, most natural sound quality is needed for that all-important lead vocal, this bass boost can muddy up the vocal sound.

For recording applications, it’s common to position the performer from about 6-8 inches to a foot from the mic—at that distance there’ll be no proximity effect and you’ll capture the natural sound of the voice. To quickly set the distance, the vocalist is often asked to hold up his/her hand, fingers spread as wide as possible, with the pinky touching the mic, and the thumb touching the lips. This will usually be a good minimum distance, as long as the singer maintains it consistently. Naturally, with the performer at this distance from the mic, any other sound in the room must be eliminated, or at least minimized as much as possible to avoid unwanted leakage—I’ll come back to that in Tip 4.

Another issue that can crop up in vocal recording, even with the proper distance maintained, is P-Popping. This is a slang term for what’s technically called “plosives”—the unpleasant thumps you sometimes hear from a mic, when the vocalist says or sings words with the letter P or B. They happen because those letters produce a blast of air and can make the mic’s diaphragm jump a little as if it had been tapped. All mics are potentially subject to this, though some more than others, and it can be more problematic for certain performers.

Vocal mics usually have some thin screening built in, in front of the mic’s diaphragm to hedge against this (and similar issues like wind hitting the mic), but these built-in windscreens are often not robust enough to prevent P-Pops, so it’s common practice in studio vocal recording to utilize a Pop Filter.

Fig 5: A Pop Filter in front of a vocal mic.

For the truly budget-conscious, this can be nothing more than some nylon pantyhose wrapped around a wire hanger, and that’ll actually get the job done, but as this tends to look a bit cheesy, there are commercial Pop Filters that you can get for around $15 that clamp onto the mic stand and work even better, and look very studio-ish, to boot. Placed between the mic and performer, the Pop Filter will allow sound through, with virtually no effect on the tone, but effectively block the blasts of air that cause the popping.

Since you’ll properly be recording studio vocals with the singer at a little distance from the mic, as above, you need to insure that the environment is not too noisy, since the mic (especially a sensitive condenser mic) will tend to pick up at least some of the ambient sound. Ideally, the vocalist would be isolated in a different room from the engineer and all the (sometimes noisy) computer and studio gear. You can buy pre-fab vocal isolation booths, though they’re fairly pricey. There are also lightweight, commercial baffles (sometimes called go-bos) available, from companies like Taytrix, that, when stacked around the performer, will do an excellent job of blocking unwanted ambient noises from getting into the mic.

Fig 6: A commercial vocal booth; some Taytrix baffles in use.

If you feel handy enough, you can build these yourself—there are a number of resources (books and online materials) available to guide you. At the very least, since a directional mic is already rejecting sounds from the rear, you can position vocalist and mic so the mic is pointing away from the worst potential noise sources like windows (closed, of course!), and humming or buzzing equipment. Even hanging some heavy blankets or comforters around the performer and mic, though it may look embarrassingly low-tech, can help block out unwanted sound just enough to accomplish the goal of a well-isolated (or at least a well-enough isolated) track.

Tip 5 - Make the best use of headphones for monitoring

Since you need the recording to be isolated when overdubbing vocal performances against already-recorded tracks, naturally, the vocalist will be listening in headphones during the recording, and the speakers, if they’re in the same room, will be off. The headphones need to be of the closed-ear design, where the earcups surround the ears, and no sound escapes from the headphones. Open ear designs are lighter and more comfortable, but that annoying high-frequency sound that emanates from them (you know the one I mean!) will leak into the vocal mic, and be potentially problematic later on.

Some vocalists have a little trouble staying on pitch when monitoring themselves in closed headphones. They’re used to hearing their own voice in their head, and they use this sound, subconsciously, as a reference for staying in tune. The phones may drown this out, so many singers will remove one earcup, turning it away from the ear, just letting it sit on their head. While this may help them get a better performance, the unused earcup will likely leak sound into the mic, so it’s important to keep an eye on the performer, and if you see them doing that, you need to kill the sound on that side of their headphone mix, by whatever means available—usually by either panning the monitor mix all the way to the other side, or, if the headphone amp has a pan control or separate level controls for left and right, making the adjustment there.

I hope these tips come in handy for any budding recordists out there who are just getting ready to tackle vocals. Nowadays, with a little care, you can get great vocal recordings in any environment!

Learn more about recording vocals in this video course from AskVideo.com: 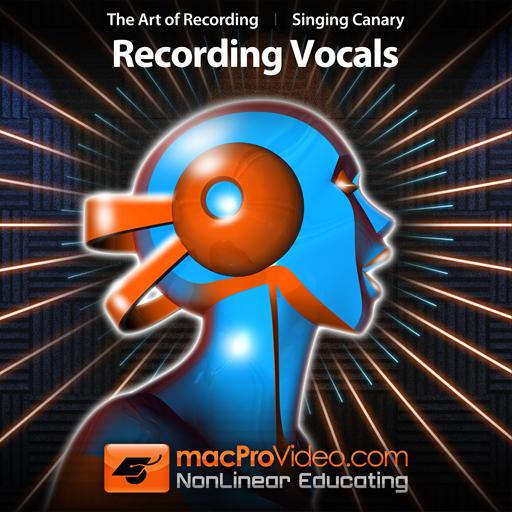