All Articles Review
3 Low Frequency Enhancers to Make Your Tracks Rumble
Darren Burgos on Mon, February 10th 0 comments
Language
Sometimes, especially when producing EDM, you just want to add more bass to your tracks. Darren Burgos gets the low-down on 3 capable low frequency enhancer plug-ins, but which one wins?

Sometimes no matter what you do to your bass or kick sounds, they're just not fat enough. In my experience, if specific low frequencies aren't present in your sound from the start, there's nearly no amount of EQ'ing that can thicken them up '"especially when you're dealing with samples. Thankfully, there are several effects that add low frequency material to your sounds. In this article we'll take a look at:

I'll first introduce you to them, then we'll look at them for use in the three most common practices: on a kick, on a bass, and on a full mix.

Adding Lows to Sounds: Not Just a 'New School' Trick

Technically these type of effects are actually low frequency synthesizers since they generate material that never even existed in the sound to begin with.

This process is far from new'¦ it was being done long before these plug-ins existed by side-chaining in a deep sine wave sound with a noise gate triggered by the sound itself. Say it was a kick'¦ when the kick fed through the noise gate, it opened it, and allowed the sine generator to punch through, thus enhancing the kick sound. Thankfully, now there are plug-ins that accomplish this specifically, and directly on the track itself.

First let's look at Waves Renaissance Bass. This is a classic and has been used for over 10 years now on countless dance records to get that sought after deep punchy bass sound. Oddly enough, Renaissance Bass doesn't actually add any material that is lower than the material your sending through it. It adds higher harmonics that would/should have been present in the sound to begin with. By adding these harmonics, your brain 'fills in the gap' and you perceive the fundamental more clearly and with seemingly more bass. 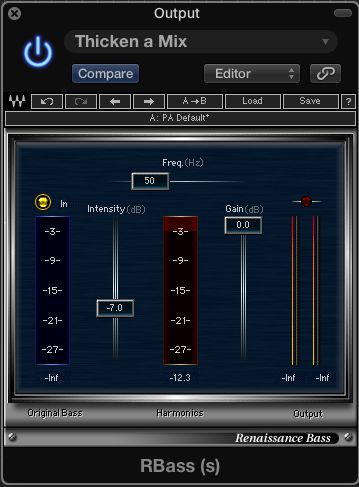 Kicks are not Renaissance Bass' main use. It's not a coincidence that the name of the plug-in is called Renaissance Bass. You can however use it on kicks to add a more subtle low frequency extension. Set the In/Out button to Out, the Frequency to around 50 Hz, and adjust the intensity above zero dB to taste. Bass sounds are another story entirely. It really thickens up a weak sampled bass instrument, or basslines that are being played at higher pitches due to the chosen key of the song.

There are dozens of fantastic presets to try, but on my bass I used a setting with the In/Out button set to In, the frequency to around 60 Hz, the intensity set to around +3 dB, and the output set to -3 dB. You can also make a huge difference to a completed mix in need of some lows by adding it last in the chain. On the unmastered mix I ran it on, I got a good result by setting the In/Out button to In, the Frequency slider to 50 Hz, the Intensity slider to -7 dB and I left the Gain slider to 0 dB.

Now let's look at reFuse Software's Lowender. This great plug-in started its life out as a Cycling 74 Pluggo effect, and is now its own independent effect. It was just updated recently to 64-bit too.

Lowender is a traditional sine wave generator, and uses two 'Bass Synthesizers' to generate deep bass frequencies. There are three 'range' settings: Classic, Guitar and Bass that are used to focus the synthesizers at frequencies around 19 Hz to the 56 Hz range. You can control the volume of each bass synth, you have a blend slider, a master output level, a gate for controlling the effect's sustain, a great sounding Drive and a Lowpass Filter. 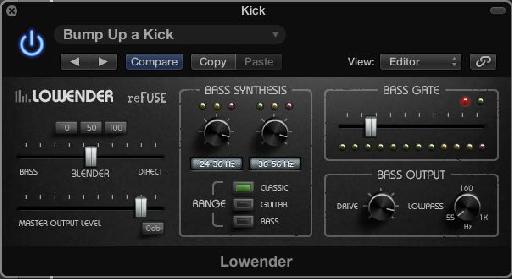 Lowender is insanely cool on kicks. It adds just the right touch of deep bass to make even the scrawniest kick seem like a monster. I got great results with the 'Classic' range setting. I adjusted both generators volumes to taste, the gate set to below halfway, the drive set pretty high and the lowpass filter set to 55 Hz. I had the blend at 50/50, and the output set to 0 dB.

Lowender does a great job on your bass sounds too. Try setting the range to Bass, the two synths volumes all the way up, slide the blender all the way over to Direct, then slide it slowly back toward the Bass position. Going with a small amount adds just the right dose of analog thickness and sounds fantastic. I'm not a huge fan of using Lowender across an entire mix'¦ even with the gate in use, it's just too much, or too little depending on the setting.

Read how Lowender and RBass are very different animals here.

If you're a Logic Pro user, the last effect I want to show you is called SubBass. SubBass is similar to Lowender in that it generates an actual additional low frequency below the fundamental. The Ratio slider sets the depth/transposition that is generated based on the pitch it perceives. The center control allows you to focus SubBass in the frequency range you intend to process, and the bandwidth controls the width of the bass tone being generated. There's a mix slider for either blending the two generators, or using either one independently. 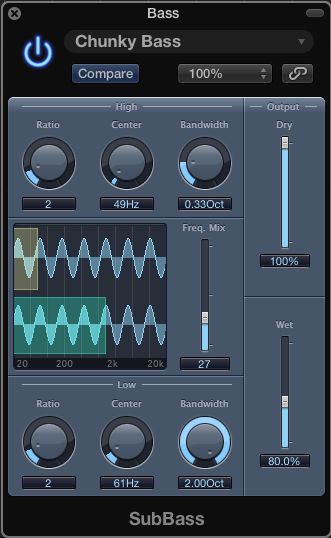 SubBass is actually quite good on kicks. You wouldn't know it by using most of its built-in presets though. The Deep Club Kick setting is pretty good, but still needs plenty of adjustments. For a kick, simply using one of the generators will produce a tighter and more accurate tone (moving the Frequency Mix slider all the way to either side will do this). A narrow bandwidth of 0.20 Oct or 0.26 Oct helps a lot for this too. A Ratio setting of 2 will introduce a sound one octave below the detected pitch, and this seems to work best in my opinion for most applications.

Processing Bass sounds individually can produce an inconsistent sound with a low bandwidth setting however, especially if the bass part has plenty of range across the keys. It's as if SubBass tries to lower the volume intentionally for deeper pitches to level out the sounds' overall volume. This works on some sounds, and not at all on others. I like a wider bandwidth setting from 0.93 Oct to the 2.00 Oct for bass sounds, then I'll move the Center parameter around to taste depending on the sound. Anything over 100% for the Wet amount can create distortion if the channel is set to a standard volume, but try pulling back the channels' volume very far down, then move the Wet slider all the way up for a humungous sound that might come in hand here and there.

Finally, processing an overall mix with SubBass'¦ yeah, let's just leave that to Renaissance Bass (and to its relative MaxxBass for that matter)!

Each of the three effects have their strengths. For kick sounds, I feel like Lowender and SubBass are the better choices. For actual bass sounds, Renaissance Bass has the others beat, but Lowender is no slacker when used moderately and Logic's SubBass when used with a wider bandwidth can produce great results too. For generating overall lows under an entire mix though, hands down Renaissance Bass.

Dream It. Do It.
Do you want to learn Dubstep Production?
Yes, I want to learn!
No Thanks, I just want to read the article.
Feedback
How are we doing?
We'd love your thoughts, feedback and questions regarding our new site. All feedback is appreciated!
We do not respond to this form! If you need support, please visit our support page.
Thank you for your input!
Your message has been successfully sent
Course Advisor
Don't Know Where To Start?
Ask A Course Advisor