All Articles Review
Affordable Alternatives to Adobe InDesign
Elaine Ashburn on Sat, May 23rd 0 comments
Language
While InDesign is industry standard in its class, you may not fancy subscribing to Adobe Creative Cloud and may be looking for alternatives. Elaine Ashburn puts 3 to the test.

The monthly '˜rental' price for InDesign by itself is $19.95 so I was looking for desktop publishing programs that would come in well under the $229 a year cost. I came up with three viable alternatives. Scribus, a free, open source program, Swift Publisher at $29.95 (with a free 30-day trial) and the consumer-friendly version of Multiad Creator for $29.99 (also with a free trial).

As always, I give my programs a 5-minute test drive. If I haven't figured out how to create what I've set out to do in five minutes, I don't consider the program to be user-friendly, or a viable alternative.

As I mentioned, Scribus is a free open source program. Open source means that the source code is open to the public so they can contribute to the features and functions of the application.

I had high hopes for this program but was unable to open it once I downloaded it. And I tried three separate times from three separate sources. Here's the error message that I got. (Image 1) Adjusting my system preferences, I was able to get around this when I downloaded Multiad Creator Express, so I'm going to try it again.

Nada. Nothing. Even giving my computer permission to open a file from any source would not allow it to open this program.  My settings. (Image 2) And yet another error message. (Image 3) I'm on a late 2013 Mac Pro running OS X Yosemite 10.10.2 in case these errors are only specific to me.

This is a simplistic, but fun, layout program. It actually has a wide array of clip art built into it that can be added to and customized.

I opened a blank canvas to start my trial layout. The first thing I noticed was the built-in clip art on the left-hand side where we usually would find a tool bar. (Image 4) Of course all the pretty pictures caught my eye and I scrolled down to nature. I found a cool cave picture and clicked on it. It immediately brought it to the center of my canvas. (Image 5) I held down one of the hollow boxes at a corner and with my Shift and Option keys selected, pulled the corner to proportionally fill my canvas. Then I made up a headline and typed it in, finding a font and font size that I liked. (Image 6) Using the color wheel palette, I turned the text to white. I didn't particularly like the line spacing as the word '˜cave' has no ascenders to equal out the spacing of the line above and needed to be moved up to work optically. (Image 7) I played around with the sliders on the right for '˜spacing' but quickly realized, it was all or nothing, so I did what any smart designer would do, I cut out the word '˜cave', made a new text box and pasted it in. I then moved it to where it was optically correct. (Image 8)

I caught sight of what looked like a bezier tool on the upper tool bar. I clicked on it and made a few bezier curves. It worked really well. It felt much more like Photoshop's bezier tool than InDesign's, which to me is a good thing since I think Photoshop has that tool down. (Image 9) There was also a whole pull-down menu of lines to choose from and the ability to made your '˜rule' any thickness you wanted. I made mine a dotted rule at 4 pts. (Image 10) Of course I didn't want this in my layout so I deleted it, then added some body copy that I cut and pasted from a Lorem Ipsum generator and changed the font color to white. I then played around with some other buttons. Now, this was all done with the existing art and to make a true determination of the abilities of the program I needed to insert a picture from my file. I deleted the cave and using the '˜insert' button on top, put in a picture I took from my office window. (Image 11). I then went to '˜arrange' also on the top menu and sent the image to the back, so my type would read.

I then changed my headline to make sense with the image and moved the body copy around. (Image 12) I tried to adjust the space between the letter '˜f' and the letter '˜t' but was unable to do that without affecting the space between every letter. I saved the document and then checked to see what it saved it as. It had its own four-digit identifier, a SwiftPublisherDocumentType or a .spub. (Image 13) I very much liked this program although there are type adjustment limitations. 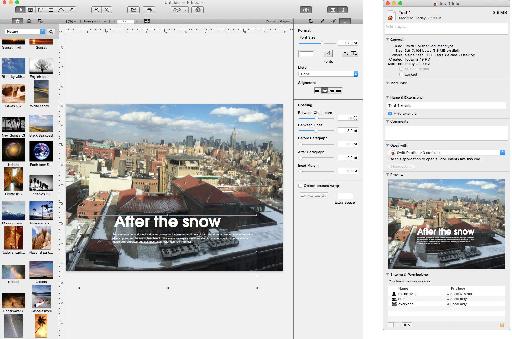 This is the consumer-friendly version of Multiad Creator Professional ($499). The Express application retails for $29.99, although I was able to download a free demo.

I opened the program to a blank canvas scrolled down to '˜letter landscape' and was ready to get started. (Image 14) I brought in the same image and it came in huge but using the specifications chart on the bottom I reduced it to fit the kind of strange canvas'"it gave me a landscape white area with a lined detail of an 8.5 x 11 letter. (Image 15) I then typed in my headline and using the specifications chart on the bottom changed the font, gave it a point size that seemed to fit the layout and turned the color to white by using the color palette on the right. I once again brought in my lorem ipsum type, but at 10 point it was hard to read so I upped the point size. (Image 16)

There was no bezier curve tool but there was a magnetic pen tool, which I used to create a shape. I was able to change the size of the rule it made by going under '˜elements' > '˜pen weight' and then entering 4 pt. into the box. (Image 17) I deleted the shape as it was only a demonstration, then I went to save the file. Unfortunately, the demo version doesn't allow you to save your work. (Image 18)

All in all, I liked both Swift Publisher and Multiad Creator Express very much but I was really disappointed that I wasn't able to install and work with Scribus. I had such hopes that '˜that was the one.