All Articles Review
Exploring Alesis IODock's MIDI features
Hollin Jones on Sun, April 22nd 1 comments
Language
Hollin Jones explores the finer points of the Alesis StudioDock and how it can be used as a MIDI bridge between an iPad and a Mac running your favorite DAW.

Reviews of the Alesis IODock have been very positive, and that's because people who try one out usually find that it really unlocks the creative potential of their iPad. Much of the focus has understandably been on its capabilities as a recording device, and it's a really accomplished one. One of the things that hasn't been as widely discussed is how it can act as a MIDI bridge between your iPad and your computer and DAW. One of the iPad's greatest assets is its touch interface and many developers have harnessed this to provide tactile control over beat programming, virtual keyboards and other input methods.

The USB connection that runs between the IODock and your Mac carries MIDI, and thanks to CoreMIDI built into iOS, there's no real setup involved in getting the two devices talking to each other even if, at present, more apps support MIDI in than they do MIDI out, as we will see. This communication is also possible (in some cases) using wireless MIDI, but the IODock's secret weapon is that it has hardware MIDI ports as well. So in addition to connecting the iPad and computer, you can also introduce older MIDI-controlled hardware into the setup, without needing a dedicated interface. Ever fancied sequencing your old drum machines from your iPad, or playing back MIDI tracks from Logic on your iPad instruments? Now you can! And depending on how you're set up you can record the resulting audio on your iPad via the Dock, or on your Mac.

Naturally you'll need an iPad and a IODock for this to work. Connect the Dock with the iPad attached to your Mac using a USB cable (You'll have to excuse the mass of cables in the background). 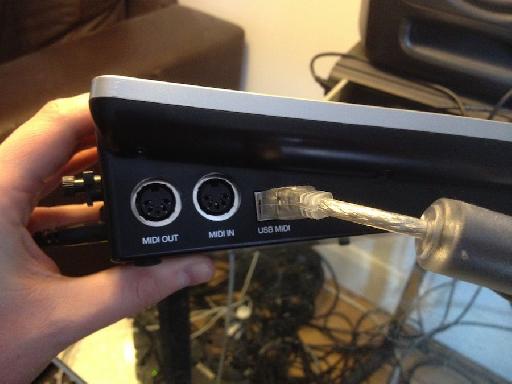 Now it gets interesting: Open a music app on your iPad (I've chosen GarageBand) and loaded a synth. Then on my Mac I have opened Logic and created an External MIDI track. When I open the Piano Roll editor and use the Pen tool to play the onscreen keyboard or enter notes, the synth on the iPad plays back! This works automatically and the setup is pretty much nonexistent. 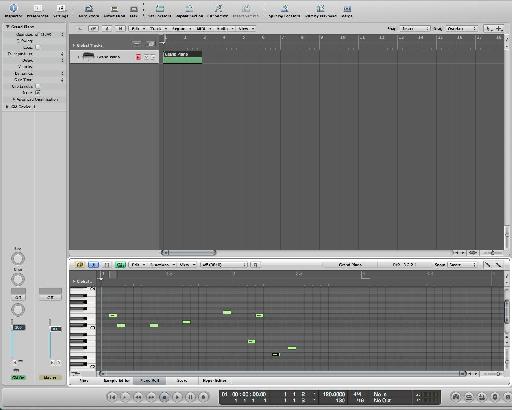 Logic on a Mac

In Cubase you need to go into the Device Setup menu and make sure the IODock is selected as a MIDI source and destination, then create a MIDI track and make sure its ins and outs are assigned to the IODock. Then as in Logic, MIDI files that you record or play on the MIDI track will play back on the iPad. 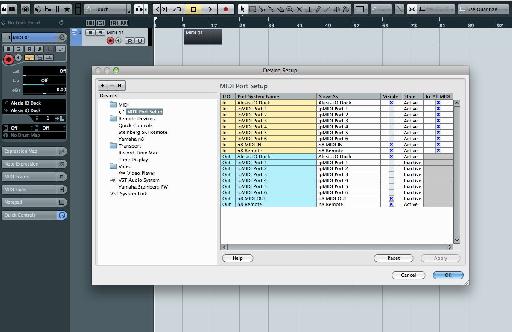 MIDI communication between iPad and Mac is a breeze with IODock

Bear in mind that the IODock's USB connection does not carry audio, so you will need to be monitoring sound through the IODock at this point, for triggering its sounds from external sources. This could be either through its onboard headphone socket or using the master stereo outputs. 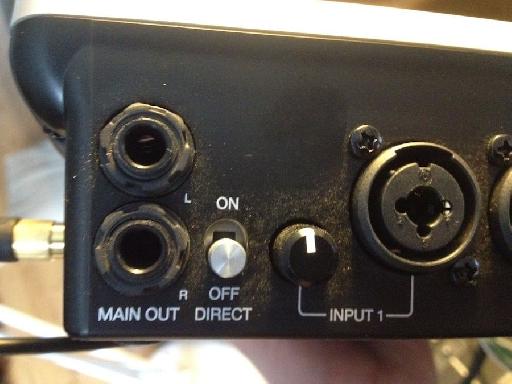 If you have programmed or imported a MIDI part in your DAW, you will be able to record it in whatever app you're running on your iPad in realtime. Press record in the iPad app, then press play in your DAW. The trick is to try to sync the two, which is made easier if you have a count in activated on the iPad. 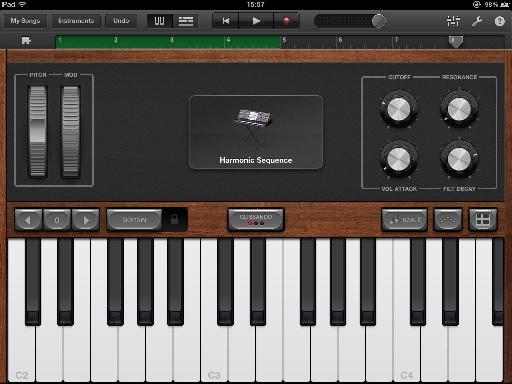 Now let's try it in reverse, and trigger instruments on your Mac from your iPad. There are a couple of things to remember before you try this: The first is to make sure you have the latest IODock firmware, which addresses some issues with MIDI out on iOS 5. The second is that not all apps support MIDI out. GarageBand for iPad doesn't, for example. So if in doubt, check with a developer. On my iPad, I discovered that Yamaha's TNR-i and FL Studio HD both supported it. Some apps don't support MIDI out

Now in FL Studio HD on the iPad, I will be able to use the keyboards and pad-based instruments to play sounds on my Mac. But first I need to set up an instrument. 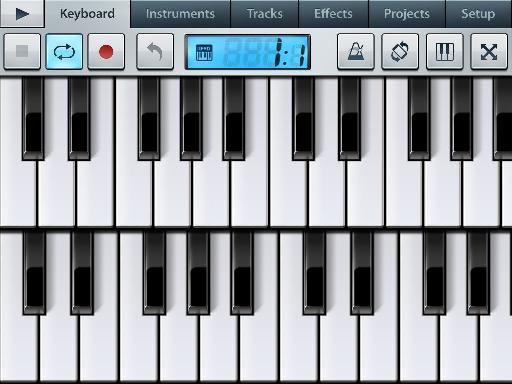 Here in Logic, I am able to create a software instrument track with Ultrabeat on it and play it straight away from the iPad. I can record a part with no latency, and it all sounds great. It seems to be a bit 'all or nothing' at the moment with this technology'"either it will work with basically no setup, or if the iPad app doesn't support MIDI out, it won't work at all. Presumably as time goes on, more and more apps will support MIDI out. 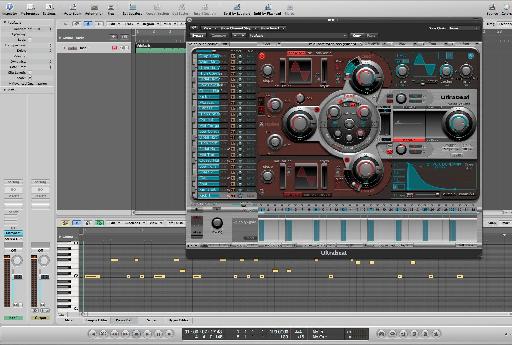 Recording with no latency in Logic

The last thing you can try is connecting MIDI hardware to your iPad, assuming you have some. For this to work, you need to connect the MIDI out port on the Dock to the MIDI in of your hardware (a drum machine or synth perhaps) and then you should be able to trigger it from any compatible app. Again, this will need to be an app that supports MIDI output. You could also use this trick to play external kit from MIDI tracks inside an iPad app, as well as playing it live by hand. 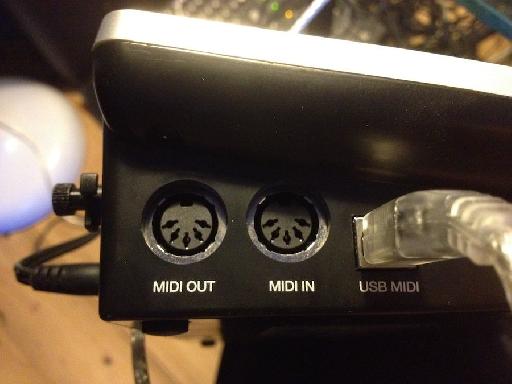 Connecting MIDI hardware to your iPad

To turn this on its head, you could connect a MIDI keyboard or drum machine, or some other kind of MIDI control surface, to the MIDI input port on the Dock. Since MIDI in is much more widely supported at the moment than MIDI out, this should work much more readily. Using this trick you could connect a MIDI pad or drum machine, or a keyboard to the Dock to play your iPad drum kits with real sticks, for example. Or where your MIDI device has a USB connection and is class compliant (i.e. does not require special drivers) you can plug it into the USB port on the side of the Dock to achieve the same thing.

You might not buy the IODock simply for its MIDI capabilities, as it's dedicated more to high quality audio recording. But the MIDI side of it is something that's a definite bonus, and unlocks the power of the iPad as a platform more than simply playing it by tapping on the screen. You can link it to your Mac, your DAW and your MIDI hardware without buying lots of extra kit, and that has to be a good thing.

Find out more about the IODock here.