All Articles Review
Film Maker Gear Overview: Tripods, Sliders and More
Iain Anderson on Wed, October 1st 0 comments
Language
What gear is essential for all film makers? Are you looking to improve your film making gear setup? If you answered yes to either of the above this guide will help you master your craft. 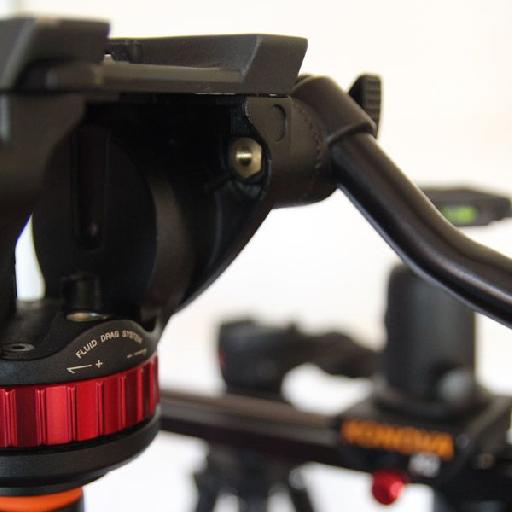 Photographers don't often need tripods, but videographers often do. Here, we'll take a look at a few examples of a few types of camera supports, discuss what they're good for, and what kinds of shots they'll help you get. Of course, there are thousands of different products on the market, so the ones we'll be talking about are just a taster. Luckily, you can find a way to keep a camera steady on almost any budget.

Not using a tripod

Of course, not everyone wants to keep things steady all the time. A bit of handheld video can liven things up, but using no support at all can lead to micro-jitters that can be very distracting and impossible to remove. To avoid jitters and keep larger movements more graceful, use a lens or camera with Optical Stabilisation (IS/OS/VC/OIS) built in, and use some kind of shoulder support or a rig. Personally, I'm not a fan of the weight, size or cost of rigs, or indeed of handheld footage in general, so I won't be looking at rigs here. 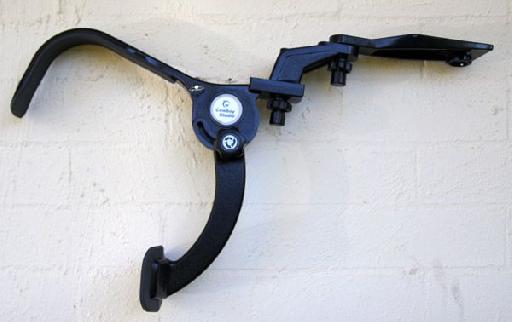 This Cowboy Studio shoulder mount is cheap but effective for the occasional shot.

No budget, or not planning much handheld? Well, if you have a DSLR, put the camera strap behind your neck, then hold the camera out to tension against it. Better than nothing, at least.

You may have heard that the best tripod is the one you have with you, and travellers know this well. Heavy kit left at the hotel or at home is of no use at all, so a compromise between weight and functionality is often necessary. My current pick is the Manfrotto MKC3-H01, a hybrid photo/movie tripod that can hold about 1.5kg of camera and weighs about 1.15kg itself. 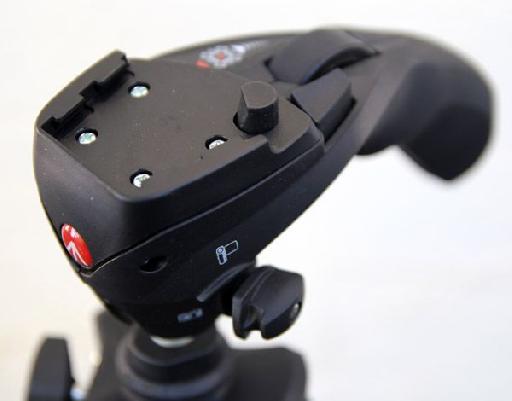 The gun mount is the key to using this tripod.

While this isn't enough to hold my full-size Blackmagic Cinema Camera, it's perfect for the Pocket Cinema Camera or a moderately sized DSLR and lens. It's not the smallest, but fits into my largish backpack; it's not the lightest, but it's light enough. Probably its best feature is its gun-grip head that's easy to unlock, level with the horizon, then lock again. The world's not flat, and this head design means you don't have to bother levelling the legs at all. Just get them approximately right, then correct the head up top. Great results, and under $100.

For something a little tougher, you can move up to a travel tripod that's built for heavier cameras, like the Benro A1180T (though it may be hard to find '" here's the A1190T. It's not as light as the Manfrotto, but it folds flat with all three legs together. If compactness is more important than weight, or you need to support a heavier camera, then this is the go.

This flat tripod is available in many variations with similar names.

No head was included with mine, but I've used it with a full fluid head and my full-size Blackmagic Cinema Camera, so it's no slouch. At about $100, that's good value.

For heavier-duty jobs, I like my tall, stable, Vanguard Alta Pro 263AT. It's a step up in weight, but also toughness and flexibility. The center column can be lifted, then tilted, to allow an unusual camera movement somewhere between a pan and a jib. 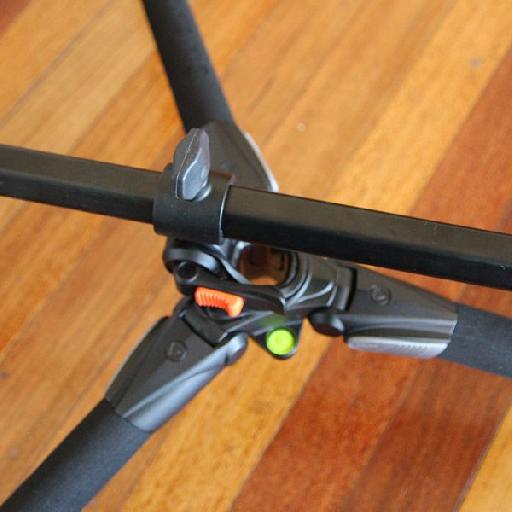 The Vanguard 263AT, with the center column tilted and legs out flat.

The legs can also tilt out to allow shots very close to the ground, and the extended warranty compared to cheaper tripods has proven useful. Around $150, or more with a bundled head.

While basic tripods (like the travel tripod above) often include a head, many more expensive tripods do not, and you'll have to buy one. A ball head is a simple design which allows for relatively easy levelling, though you should move the head rather than the camera to avoid loosening the two.

Make sure the head is rated for the weight you want to put on it, and remember to count the weight of the head when figuring out the tripod capacity you need. My Vanguard came bundled with the SBH-100 and two baseplates, which have been very useful.

For smooth pans and tilts in a shot, look for a fluid head. Manfrotto make several, and I've been happy with my 502AH. While non-fluid heads tend to jerk and jitter, fluid heads allow smooth starts and stops. If you need to track a moving subject, this is going to be one of your most important tools, and indeed some people will spend around $2000 on the very best fluid heads. Try before you buy if you can, but the Manfrotto 502AH is about $200. The Manfrotto 502AH, mounted on my Vanguard.

It's also available with a easy-to-level half-ball beneath it if you buy a matching tripod, like the 502AM.

For more extended movement, you could invest in a slider, allowing you to move smoothly from side to side. Smaller sliders with lighter cameras can be mounted on a single tripod, allowing extreme flexibility with camera positioning. 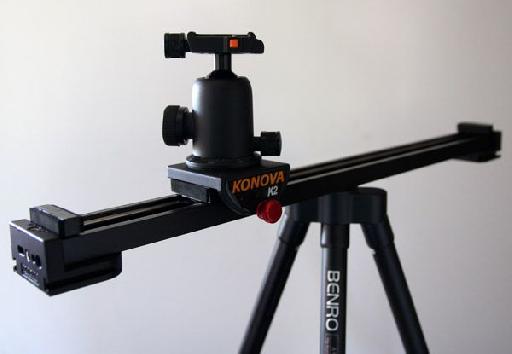 The Konova K2 slider, on my Benro travel tripod, with a ball head on top

I use a Konova K2 on my Benro flat travel tripod for a light, easy-to-move setup that lets me capture smooth movement, and the slider starts at around $220 (without a head). You can absolutely spend lots more than this, on longer, tougher, motorized sliders, jibs and related goodies.

Way down at the low end of the scale, it's easy to find a selection of cheap iPhone (and other smartphone) supports which are a whole lot better than nothing. If you can find $5 and a couple of weeks of waiting time, pick up an iPhone holder with a standard tripod screw in the bottom. 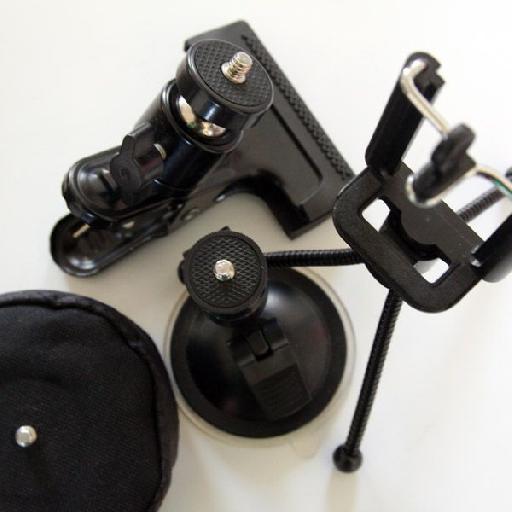 You can also find suction-cups, clip-on mounts, and all manner of lightweight gear for next to nothing. Stock up on this cheap gear between jobs so you have it if you need it.

We've stayed pretty cheap, but some people will spend over $2000 on a really nice jib, tripod or fluid head. Should you too? Well, maybe. If you want to save weight by using carbon fiber instead of metal, it's going to cost you. All kinds of features (half-ball levellers, leg spreaders, can make it quicker to get a shot stable, to control its position, and to make sure it stays there. To some degree, you get what you pay for.

However, the most important reason to spend more money on a tripod or head is to support a heavier camera. If you're moving up to a heavy, shoulder-sized camera or a massive lens, you're going to really need to step up the tripod to support it. For an iPhone, it's overkill.

This is only a taster of the kinds of camera supports available, and it's definitely on the cheaper end of the scale. Decent tripods will outlast your camera, so they're worth spending money on, but I don't regret any of these purchases. Whatever you get, you'll need to practice on, and using a fluid head or a slider is something that can take some getting used to. They're all worth it, though. Dive in, try out as much as you can, and get shooting!

Dream It. Do It.
Do you want to learn The Director?
Yes, I want to learn!
No Thanks, I just want to read the article.
Feedback
How are we doing?
We'd love your thoughts, feedback and questions regarding our new site. All feedback is appreciated!
We do not respond to this form! If you need support, please visit our support page.
Thank you for your input!
Your message has been successfully sent
Course Advisor
Don't Know Where To Start?
Ask A Course Advisor