About 8 years ago Pauli Ojala developed and published Conduit, a plugin for legacy Final Cut Pro that offered a node based workflow for creating effects. Today it has been reborn as PixelConduit which is available in the Mac App Store.

PixelConduit can ingest and output video from a variety of live and file based sources. With its node based workflow it can do keying, HDR effects, animations, 2D and 3D processing, integrates with the Canvas of HTML 5, can be used in collaborations and more. It is a â€œhybrid graphics systemâ€ that is unique in the media production industry. The free plugin works with Final Cut Pro, Motion, After Effects, Photoshop and Aperture. The paid add on is PixelConduit Complete for $129.00 that includes: Capture Tools, Stage Tools, Render Automation, Stereo 3D Tools, and Video Link. 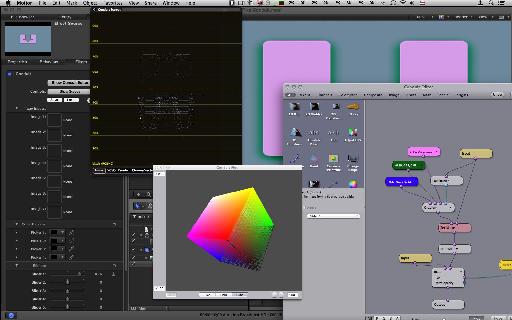 I first reviewed the original Conduit for Event DV magazine back in 2007-ish. I was really impressed at the time and got some good use out of it. Recently Pauli was kind enough to speak with me about where it has been, where it is now, and what the future holds.

What is your personal background in video?

I actually studied to be a film editor, so I've used Avid Media Composer quite a bit back around 2000. Hence I have a fairly traditional view of what to expect of an NLE, and FCP X certainly was a shock to those expectations!

Initially I had a negative impression of FCP X, partially because the first version didn't perform well at all on the Core 2 based Mac I had at the time. Nowadays I've come around, and I've been enjoying FCP X more and more. It doesn't have the feeling of precise control that I learned to expect from my editor training, but once you get used to the notion of giving up a bit of that control, it feels like FCP X lets me get a lot done very quickly. Apple has been very reactive to the community. The bond between the software and hardware is very powerful, but it will take some resources to tackle this ecosystem in the way it should be done.

One could say PixelConduit is like a cross between a traditional "offline" compositing app such as Shake or After Effects, and a live video app such as the software used by VJs. But it's not precisely either, so it's a bit difficult to pin down. It is not a timeline-based video editor, but rather a "video room" where you can build almost any kind of setup for processing video. It has excellent facilities for input and output, so your video setup can be controlled and can produce output and recordings. I wish i had a better description of the app. PixelConduit is a complete set of tools and I feel more Final Cut Pro users would need that sort of resource. The free version is in fact fully functional. 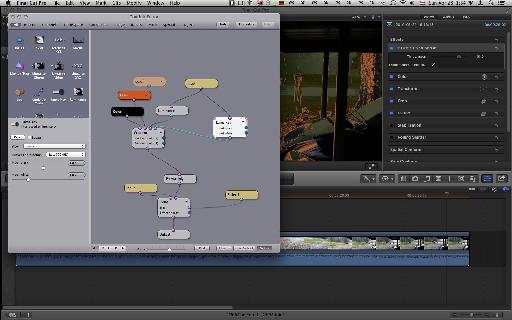 What are the origins of PixelConduit?

The original Conduit was created back in 2005 as a collaboration between myself and Ben Syverson. It came out of another project I started. I had an interest in animation and there was no affordable software at the time. I just wanted something to experiment with, so I made Edo, which was available for free. We reused the nodal user interface from that project, and combined it with a new rendering engine that could extract maximum performance from GPUs. That gave us Conduit.

At the time, graphics processors had finally reached a level where they could do arbitrary pixel processing. The big idea in Conduit was to "fuse" the node tree so that it can run as a single program on the GPU. This made it much faster than, for example, layering effects in Motion. As far as I know, there's still no other visual effects software that has this kind of node-fusing capability on a general level.

Conduit was originally created as a plugin for Motion 2. It was expanded with support for After Effects and Photoshop a few years later. I also made a Windows version of those plugins, but unfortunately it was too hard for me to keep it updated, so I had to drop the Windows versions in Conduit 2.0.2.

PixelConduit was originally called Conduit Live, which gives a hint of the original idea. Conduit Live was conceived as a standalone app for processing and recording live video using the same Conduit effect setups as the Conduit plugins.

Over time, Conduit Live's capabilities were greatly expanded. I had built the Stage Tools add-on already in 2007 for the Finnish National Theater, where they needed to run complex video shows with Conduit effects programmed as part of it. In 2010 version 2.0 of Conduit Live was a major update. It introduced the Project view where you can build effect setups consisting of "devices" like inputs, cameras, multiple effects and screens. And of course now, in 2013, the app has become PixelConduit.

I think originally Conduit for the original price had its moment. Right after we released Conduit, Shake came down in price, and people had a different perspective on the value of the node based applications. Not just Shake, but other products came down in price. Today Motion is only $50 and thereâ€™s not much room anymore for expensive applications.

There seems to have been a gap of silence between the original Conduit and Pixel Conduit. What was that transition time like?

From the point of the Final Cut community, Conduit was released through DV Garage, which was helpful to have an American company handle the release. But they did not quite see the potential. Finally I figured it was better to handle my own project myself and stay more focused on it.

It is very integrated, it gives other tools so you can program the system to do transitions and changes and effects and run shows reliably. Or even if it is not a show, for people on film shoots to test live effects before hand to see what the effects will look like. I think it is a big part of what makes it valuable because you can go program the system with a more structured control. Like a VJ is really busy and has to be able to make things happen. We can do it more easily and reliably than something like a pure Quartz Composer environment. PixelConduit is all original coding and doesnâ€™t use Quartz Composer. It relies on the Mac operating system and PixelConduit gives you more high level control, where Quartz Composer looks at something that happens over time. And they definitely can complement each other. 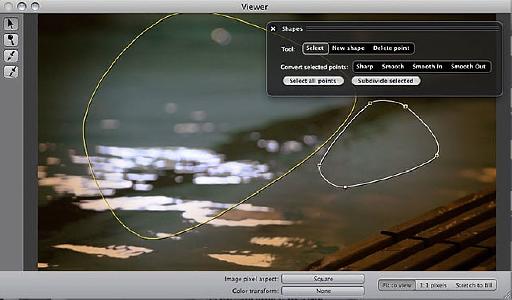 Are you doing any work with things like the Kinect controller?

It is something Iâ€™ve actually been working on. For something like control of a sequence where, like a touch screen at a distance, mostly. There are other things it can be extended to for some interesting interactions, where hand or body positions can be used as parameter triggers on some operations or another. There is a lot of possibilities.  We donâ€™t have the rich kind of data because of the camera type.  A 3D program has a lot more data to pick up a pixel more than a Kinect, but it can provide a lot of possibilities for less money.

What new projects are you working on now?

Nowadays my team is just myself as my original partner in Conduit, Ben Syverson, is working on other things nowadays. I've been working on experimental projects related to stereoscopic 3D and depth cameras like the Kinect. I feel there's something interesting brewing in those kind of sensors, a completely new way to capture the world into movies. But working with real 3D data is so complex that it's going to take quite a while before we can actually do cinematic work in such a medium. 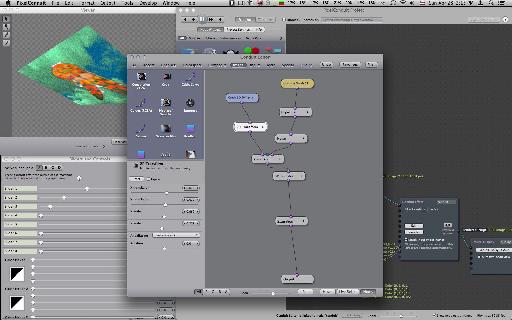 PixelConduit is a very interesting and exciting package for stage productions, film and video productions, VJs, and others. I find it very worth taking a good hard look at it. Try it out, see if it can help your productions and workflow. In Final Cut Pro X I have been having some real fun with it. For more information visit www.PixelConduit.com. Pauliâ€™s company web site is http://lacquer.fi where you can also find his personal blog.

Dream It. Do It.
Do you want to learn Titles, Effects and Compositing?
Yes, I want to learn!
No Thanks, I just want to read the article.
Feedback
How are we doing?
We'd love your thoughts, feedback and questions regarding our new site. All feedback is appreciated!
We do not respond to this form! If you need support, please visit our support page.
Thank you for your input!
Your message has been successfully sent
Course Advisor
Don't Know Where To Start?
Ask A Course Advisor