Gibson has made a pretty big splash in the near-field reference monitor pool with the Les Paul Reference monitor line. All three sizes of the LP monitors bear the unmistakeable styling of the classic Gibson Les Paul guitar. They look absolutely incredible. How do they sound? Read on to find out!

Inside and Outside the Box

The first thing I noticed when I opened the box for the LP6 monitors I was sent for review was the packaging. There is definitely a '˜boutique' feel to the packaging which was very reminiscent of Apple products. I didn't so much as '˜open the box' as '˜unveil the monitors'. They were encased in a very nice velvety-roped bag that doubles as a protective cover for storage and moving.

By this point, I was definitely thinking, 'Ok, Gibson, they look great. I really hope you're not over-compensating here. Let's plug them in and see how they sound.'

I'm not going to make you wait until the end of the review to read this'"The LP6 monitors sounded great. These monitors are definitely not all about looks. I've been using the same 8' monitors for the last 8 years or so, and when I put them aside to give the LP6s a test run, I found that I could crank up the LP6 monitors high enough to be comparable to the volume level I was used to with no issue. You can turn these up to the maximum amount and they retain their sonic fidelity. 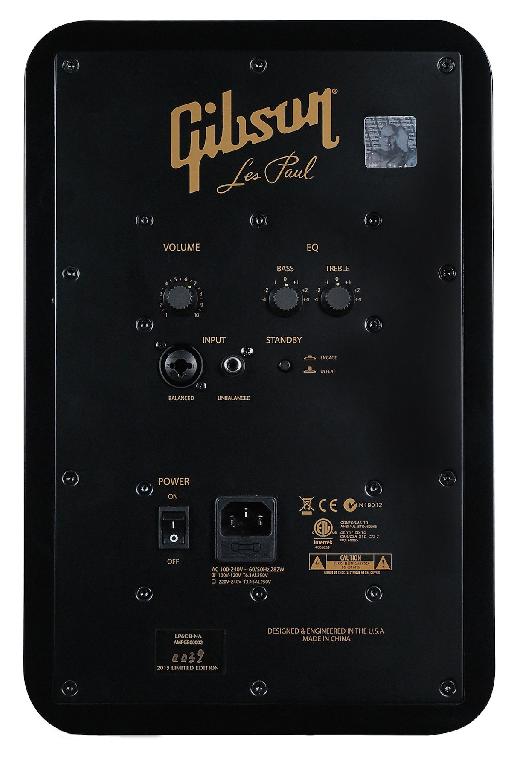 There is an included EQ on the back, and I did find the default setting to be a little top heavy for my room, so I rolled it back by one notch on each speaker. After an all day recording and mixing session I can honestly say my ears felt a lot less tired than usual. It's very easy to avoid listening fatigue with these monitors'"you can keep them at a lower volume and still feel you're getting all the sonic detail you need to craft an accurate mix.

After some more mixing and some time to be alone with my thoughts, I started to think about my original bias. These monitors looked so cool'"why did that set off any kind of alarm at first? Why did I assume that since they were made by Gibson and bore the Les Paul name that these might be all sizzle and no steak? It's really a bit of nonsense. Les Paul is a great name for pro audio'"the guy pretty much invented multi-track recording! After several days of being up on my shelf, I still crack a little smile when I sit down at my console and see the cherry wood front reflecting back at me.

The LP monitors are available in 3 sizes with 4 inch, 6 inch, and 8 inch woofers. All three models feature a 1' tweeter made of titanium. The speakers themselves are fairly light, and designed to take up minimal desktop space despite the woofer size. As mentioned, the low/high frequency controls on the back can help tailor their sound to your space. Finally, they have a pretty tightly controlled bass sound that really doesn't fatigue you at all. I didn't have to listen very hard to find the details in the few mixes I worked on with the LP6 monitors.