We are told with every new iPad and iPhone release that the latest models have way more processing and graphics power than the last one, and an order of magnitude more than the earliest models. But it’s relatively rare to see it put to use outside the field of gaming. Mobile DAWs can tap into this power for sure, but video editing is one area where the iPad hasn’t seemed so far to live up to its potential. This is partly because done right, nonlinear video editing and compositing is incredibly resource-heavy. Then there’s the competition from Apple’s own iMovie for iOS – lacking really detailed features but also free, and decent enough for many consumers. 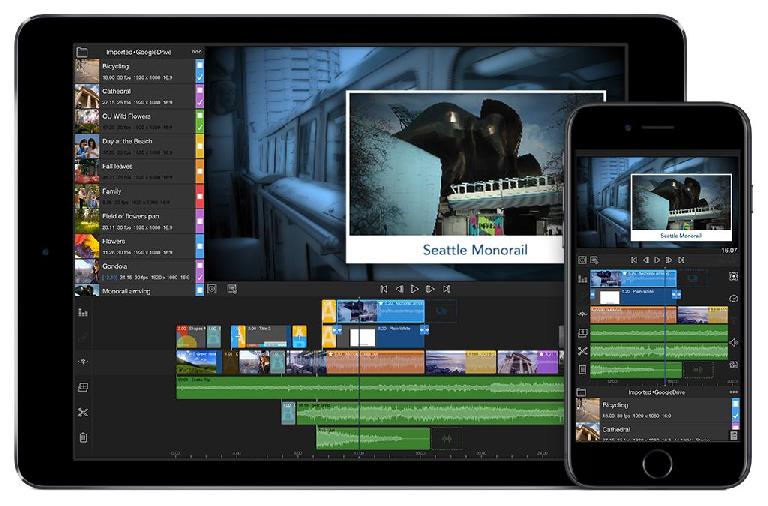 Developed by the team behind Pinnacle Studio, LumaFusion is designed to go far beyond Apple’s offering, providing a much more pro-level feature set that could conceivably serve mobile journalists as well as filmmakers who don’t want to lug a laptop around. It’s $40, although periodically on sale for less (at the time of writing it's $19.99), and seems to receive regular updates which is usually quite a good sign. The system requirements are any iOS device that can run iOS 10 though as ever, the newer your device the smoother your ride will be. iPhone compatibility is a bonus given the scope of the tools on offer, though honestly I found the iPad Pro screen to be much more comfortable to use.

We need to get something out of the way, and it’s this app’s only real let down as far as I can tell. Nonetheless it’s something that you will come across as soon as you start a project. You are provided with a number of ways to get your footage and other data into the app: direct import from Dropbox, Box, Google Drive and OneDrive are supported but there’s no iCloud Drive support at the time of writing. You can import locally from your Camera Roll, iTunes or via iTunes’ File Sharing tab (large videos are one case where you might actually bother hooking your device up to your Mac or PC for file transfer) and the app does seem to cope well with various mixed media formats inside a project. The developers told us that native iCloud support is coming in an update, but frankly it can’t come soon enough given how central iCloud sharing is to the iOS and Mac experience. There’s no native access to your camera, which seems like a no-brainer for mobile journalists, and no wireless ftp access to local computers – both of these are found commonly in other apps and would make media import far more flexible. You can use the share sheet to transfer data from other apps into LumaFusion (“Open With…”) but this is slow and cumbersome and relies entirely on the other app’s design – sometimes multiple select is not even supported for example. FTP functionality is apparently also slated for inclusion in an update, and native camera access has “been added to the feature request list”, though I can’t imagine why they wouldn’t add it as soon as possible.

Once you’re past that initial hurdle, this is far and away the most powerful iOS video app I’ve used. You can start by choosing from different window layouts based on how you like to work. Then, choose which parts of clips you want and drag and drop them into the timeline, with various drop modes to control how material is placed. You get an astonishing amount of control over clips in the clip editor and timeline with tools like motion, fit mode, animation, sizing, rotation, blending and more. There’s a popup tool panel that links to any selected clip in a project and gives access to info, slip edit mode, cloning, detaching audio from video, unlinking, applying presets and there’s even a clipboard system for copying and pasting attributes. Three A/V tracks are available for photos, videos, titles and graphics and there are a further three dedicated audio tracks, plus a great onscreen audio mixer with clear level meters. Back at the top left you can move between browsers. Having already used the Photos, iTunes and Imported options to bring data in, there’s also a royalty free music bin with some preset tracks. A Title section provides a great selection of preset title shapes, styles and ideas and by entering Edit mode for a title you can of course customise it as well as using the movement and animation tools to create motion graphics. Transitions are available too, a range of pushes, slides, wipes and fades. You can even record voice over directly into an audio track. 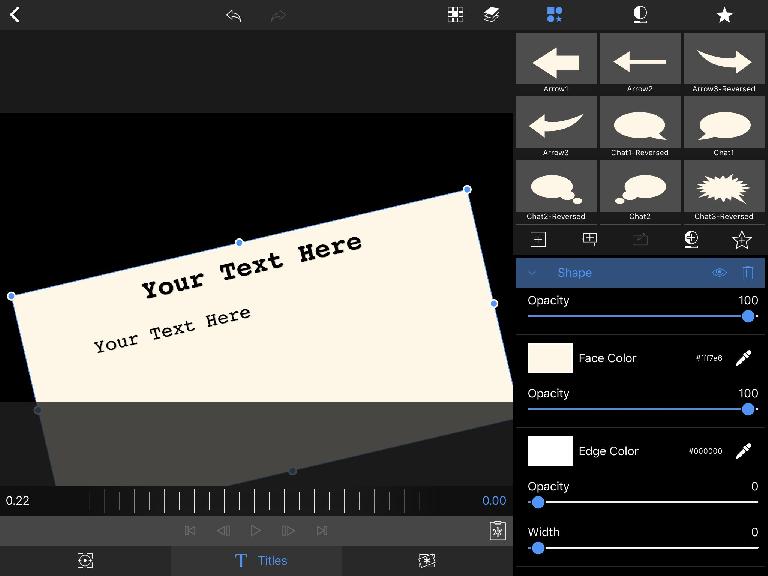 There’s thought been paid to actually using the app too, so there are nice touches like things remaining anchored when you need them to, snapping, saving and sharing presets, full undo / redo and so on. Tagging, searching and management of data as well as support for professional aspect ratios, frame rates up to 60p and up to 4K resolution are also present. You can play with the speed and direction of clips, apply colour effects, zooms and many other very impressive live video effects. 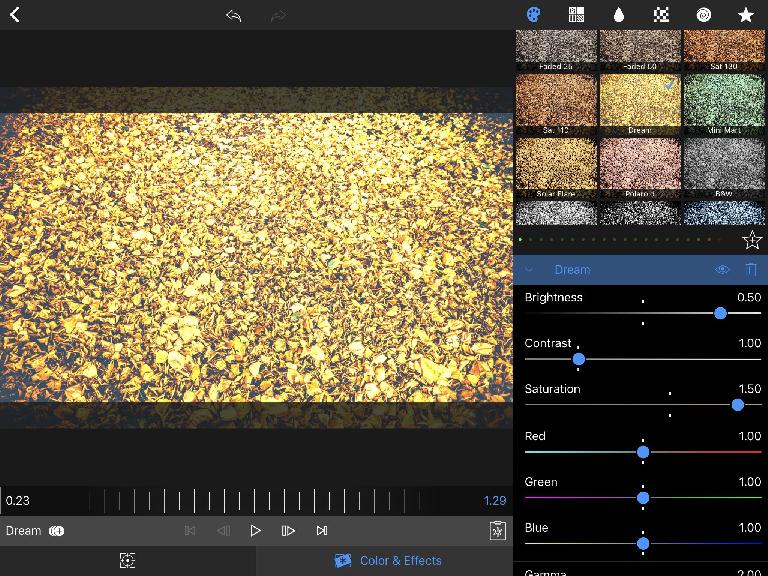 The selection of effects is actually really useful, with many having custom controls, touch-based focus or direction and so on. There’s even a CPU meter of sorts to show you how much power they are using – in the case of the more complex ones, it’s quite a lot. Variable preview quality is available too, so you can balance performance with playback. When you’re done you can export to social media, cloud services (though again no iCloud Drive for some reason) and in various formats and qualities. AirDrop to your Mac is possible, thankfully, since exchanging large video files via the cloud can be tedious.

LumaFusion is undoubtedly the most powerful iOS video editing app I have used, bringing enough serious features to the table that it can rightly call itself a pro app, especially once important additional file transfer features arrive in the near future. I could imagine mobile journalists or indeed anyone working on the move using it to produce great quality edits. Far more than just arranging clips on a timeline, it allows you to edit the properties of all media, edit smoothly, create motion, titles, special effects and mix audio as well as featuring clever things like variable playback quality to save power, and cloud access (to be expanded). 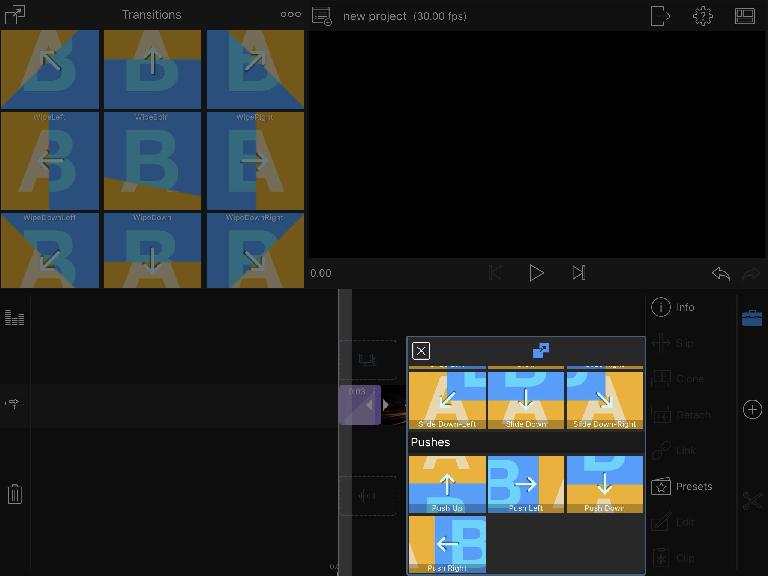 Oddly it almost feels like the developers have overlooked a few rather basic things (iCloud, camera, FTP) while they were busy building the much more advanced features. Clearly they have the ability to add them, and they say they will do so in future updates. In the meantime this is still a very powerful video editing app for iOS that will help you make pro-quality movies on the move.

Cons: iCloud Drive native support and FTP transfer are coming but not here yet. Native camera access is slated but not confirmed for inclusion. Getting media imported can be slow.