The Panorama P4 is not exactly the new kid on the block, but very recently Nektar added support for Bitwig and Logic Pro X. As I missed out on giving the P4 a run for its money at launch, this seemed to be the perfect excuse to get my hands on it. 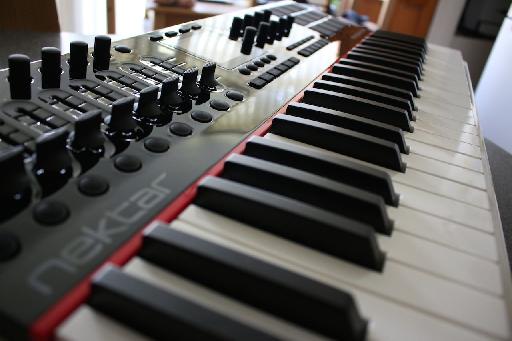 In this review, I'll look at the build quality, feature set and how easy it is to install and set up for the new DAWs.

I'll be looking at the new DAW support later, but first let's talk about how this thing is built and what you can expect when you pull it out of the box. First up, this thing is pretty striking in appearance, no muted tones here. The P4 stands out of the crowd with glossy black finishes, white angular casing and oversized buttons and knobs.

The build quality is good and is certainly on par with its competitors at this price point. I probably wouldn't want to take the P4 on the road without a case, but moving between studios and rehearsals shouldn't cause any problems. The knobs and faders feels sturdy, the mod/pitch combo is well made and all the buttons have a nice positive click.

The P4 certainly has a striking design.

The central screen (which we'll come to in a second) although not the biggest I've ever seen is bright and clear and certainly does a good job of displaying all necessary data. All in all the P4 is solid, looks good and is probably sturdier than the majority of controllers I've owned to date. 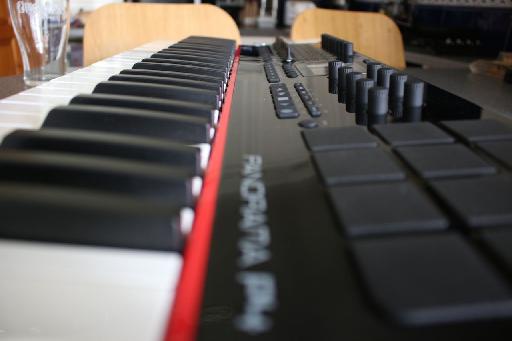 '¨One thing I haven't touched on yet is the P4's keyboard. Unlike many controllers, it's semi weighted and a joy to play. It really does feel like a step up from most of the synth weighted models in my studio.

Moving up to the control panel, you'll find an impressive amount of controls. Amongst these are 17 knobs, 10 faders and 12 pads. The knobs are in two groups, one to the right which are essentially '˜soft' controls for the data displayed on the central screen. The remaining knobs and faders are to the left of the screen and represent level and pan controls for your DAW's mixer.

The P4's front panel has an intuitive layout.

The 12 pads to the far right of the front panel are slightly larger in size that most (think Maschine, MPC) and feel sturdy. In testing, they reacted very well to velocity and had a positive feel when playing percussion. The only issue here is that there are only 12 of them, so for instruments with a pre-set grid of 16, this may be a bit of an issue or require scrolling though banks to access entire kits. 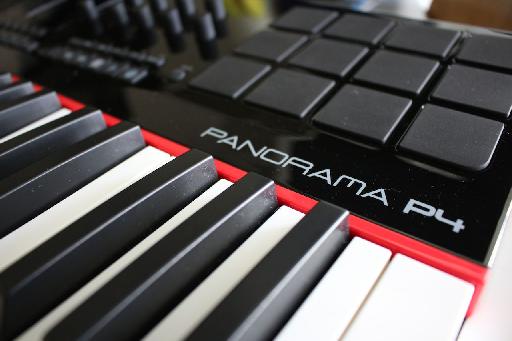 The P4's 12 velocity sensitive pads in all their glory.

It's worth talking about the motorized fader at this point. Not only is this a unique feature in controller keyboards, but I was also excited to try it. If you want to use the flying fader you'll need to supply extra power via a mini USB jack. Once powered up, you have a touch-sensitive 100 mm ALPS fader to use on any DAW track.

Moving on from switches, buttons and keys, the software you'll need to install will differ depending on which DAW you plan to use your P4 with. You can install multiple packages but you will need to download them separately. Although each package does have universal files like firmware updates and how-to guides, it might have been nice if this process was a bit more straightforward.

Once installed, there may be a bit of simple setup to be performed in your DAW. This will differ from app to app, but everything you need is on the Nektar site. With this completed operation in Logic and Bitwig, operation was smooth and intuitive.

Everything worked very well in both Logic and Bitwig. Instruments, plug-in parameters and mixer levels were all available with zero hassle. The display helps you navigate the '˜soft knobs' on the right of the panel and even gives you feedback on the fader and pan controls when accessing the mixer. 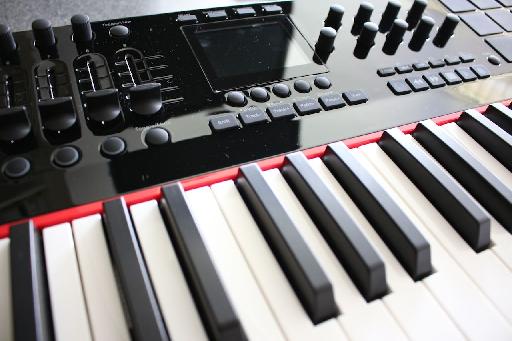 I found that one of the highlights was controlling Logic Pro X's instruments and plug-ins. For example, the Retro synth came to life due to the fact every single parameter was suddenly available on a dedicated knob. The Logic Pro EQ was equally tweak-able and automation became so much easier to record.

This is certainly an interesting controller keyboard if nothing else. It sports combined features you won't find anywhere else on a single product. A touch-sensitive motorized fader, customisable LCD display, velocity sensitive pads, full transport control, semi-weighted keyboard, and a host of buttons, faders and knobs.

Add to this rich feature set solid compatibility with a host of DAWs and you've got yourself a pretty impressive package. If you are in the market for a new controller and like the idea of tight integration with your software, then the P4 should certainly be on your short list.

Look at those faders!

There are other products in this area that boast similar features. M-Audio and Novation for example both have their technique for accessing your DAWs parameters and some of them even have semi-weighted keyboards. It's well worth having a look around, but the P4 does seem to keep its head above water with a few standout touches.

When it comes to DAW control, remember that although I have been testing the P4 with Bitwig and Logic, it was originally designed originally to work with Reason. It also connects to Cubase and Nuendo so there is plenty of options in this area.

Dream It. Do It.
Do you want to learn Instruments and MIDI Explored?
Yes, I want to learn!
No Thanks, I just want to read the article.
Feedback
How are we doing?
We'd love your thoughts, feedback and questions regarding our new site. All feedback is appreciated!
We do not respond to this form! If you need support, please visit our support page.
Thank you for your input!
Your message has been successfully sent
Course Advisor
Don't Know Where To Start?
Ask A Course Advisor