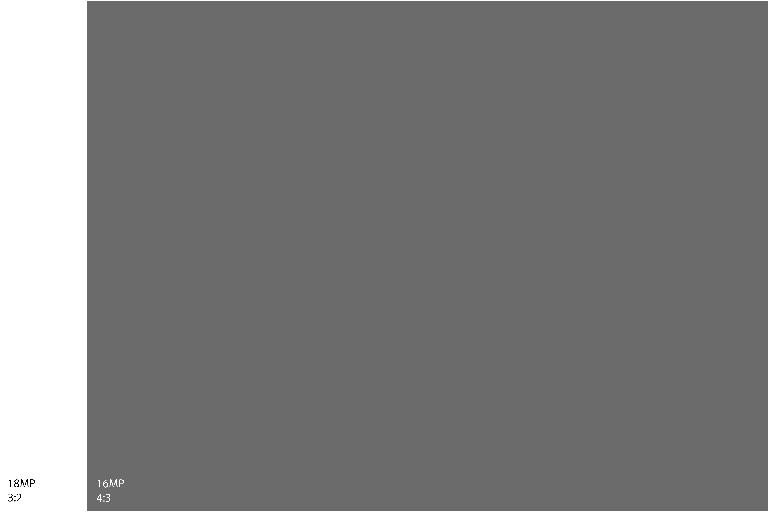 18MP vs 16MP is actually a significant difference in width.

The G7’s sensor has 16 megapixels (MP), and while that’s only a little shy of the 18MP that many Canon DLSRs offer, the 4:3 aspect ratio of the G7’s sensor means that stills are significantly less wide: 4592x3448 on the Panasonic vs 5184 x 3456 on most Canon 3:2 sensors. While that’s a shame if you were hoping to fill a Retina 5K iMac screen, the real star feature of this camera is the 4K video recording.

While the larger, heavier GH4 takes a straight 1:1 crop from the sensor, the G7 takes a slightly larger area and scales it down, but it does a very good job. I’ve pixel peeped comparison shots from the two cameras and struggled to find any difference, while others online say that the G7 has lower noise than the GH4. I’ve seen no moire, no banding, no chunky compression areas: it’s very good. 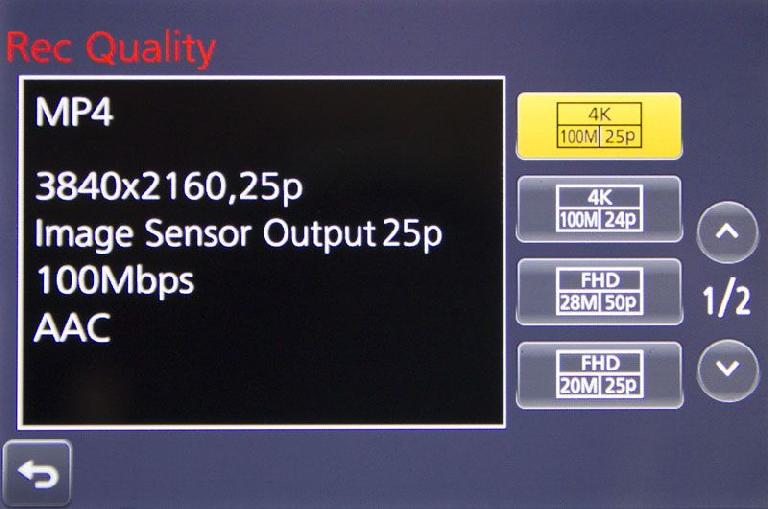 Unlike the GH4, the G7 is region-locked, meaning that in PAL countries you can shoot at 24 or 25fps, and in NTSC countries, at 24 or 30fps. That’s as high as it goes, and you can’t switch regions either, so this is not a high speed camera. The GH4 is region-agnostic, and while it does offer up to 96fps high-frame-rate recording, I haven’t been impressed with the video quality of high-frame-rate footage. Also, 96 really isn’t that high when the iPhone 6s offers both 1080p120 and 720p240 recording. For truly great high-quality high-speed recording you still need to spend a lot more money, so this isn’t a huge deal for me and may not be for you either. In resolution terms, the 1080p mode suffers from artifacts that the 4K mode does not, so shoot everything in 4K MP4 and ignore the lesser settings. 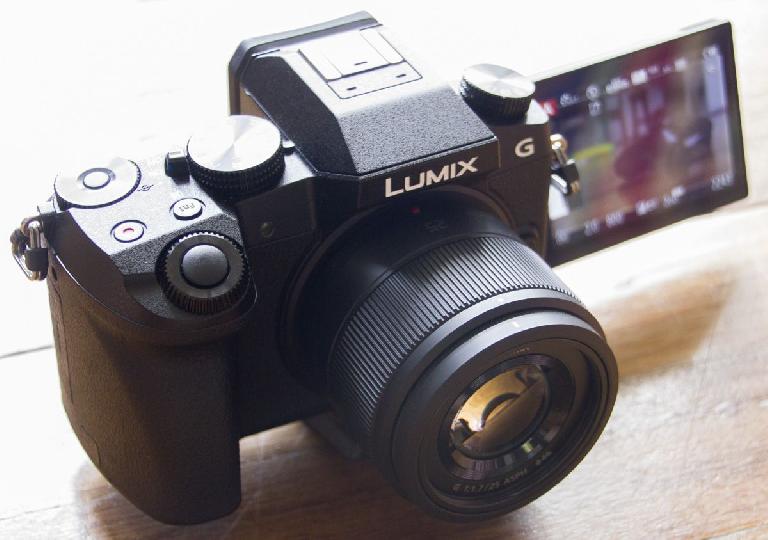 Coming from Canon cameras for stills and Blackmagic cameras for video, I’m really happy with what Panasonic have done in terms of handling. The G7 is very light but still feels sturdy. Its flip-out reversible screen lets you protect it when not in use, view it at any convenient angle, or even take selfies. There’s an electronic viewfinder for when the sun’s just too bright or for those who simply prefer one. Both are clear, high resolution and easy to customize, while the flip-out screen also responds to touch control. 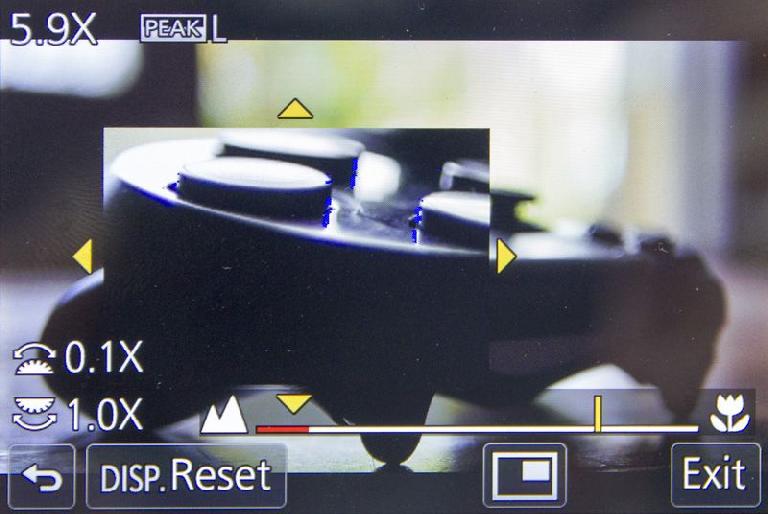 Manual focus, with a picture-in-picture display and peaking

Autofocus is one of the key strengths of the Micro Four Thirds family, and even in poor light the focus time is well under a second. There’s manual focus, manual focus with automatic focus on request, several different auto-focus modes, and even a (somewhat limited) continuous auto-focus mode. While that last one is OK for stills, it can hunt for focus while recording video. My preference is to use auto-focus at first, but to fine tune manually whenever needed, and that’s easy to do with a full-screen or picture-in-picture close-up that appears whenever you touch the focus dial (or a chosen button). 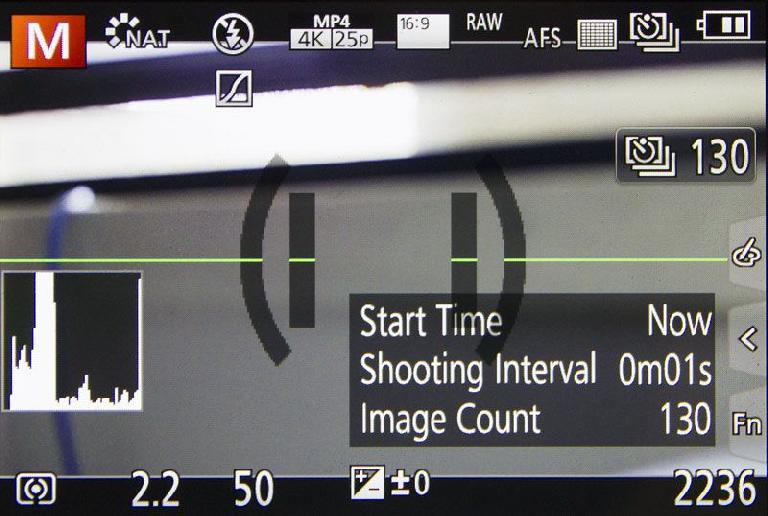 The display has many, many options you can show, including the interval shooting on show here

It would be easier to list the features the G7 doesn’t have than to list them all here. The long, long list includes two kinds of focus peaking, configurable zebra patterns, Wi-Fi support with a connected iOS/Android app, interval shooting for timelapse, in-camera video conversion for timelapse, histogram, audio meters, configurable photo styles, configurable shadow and highlight controls, horizon and grid lines, panorama support including auto-stitching, and many, many other settings too. 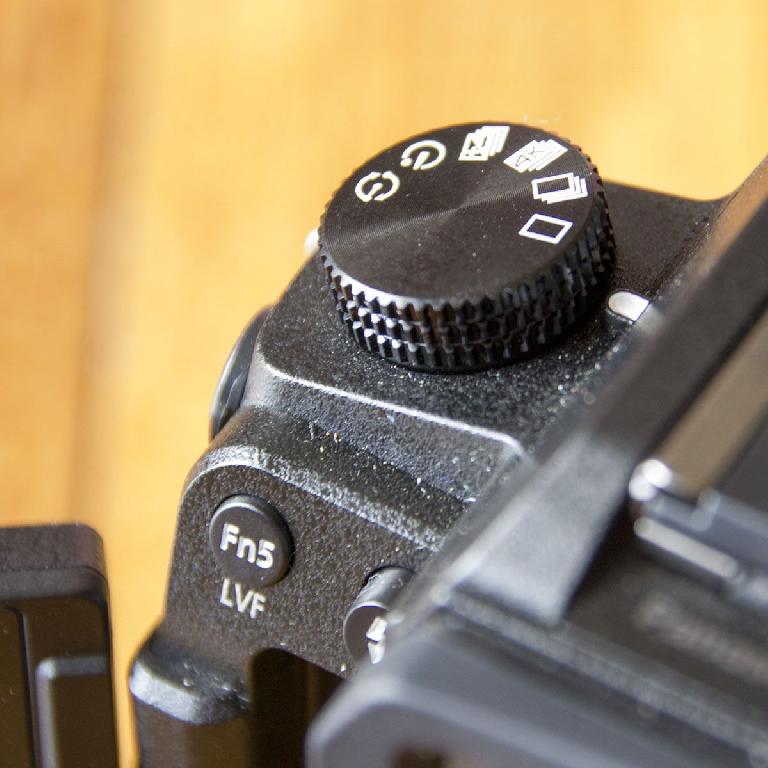 Anything missing? While there’s a stereo mic and a mic input, there’s no headphone jack; without monitoring, you’ll probably want to record audio externally. The HDMI output goes black while recording, so external monitors aren’t nearly as useful. There’s also a limit of 29m59s on recordings in PAL regions (grr) so this camera won’t be the answer for recording longer live events. Aside from the frame rate restrictions mentioned above (compared to the GH4) there’s also no way to adjust Hue, nor pedestal, nor shoot in the slightly-wider-than-16:9-4K-DCI mode, but they’re minor issues. 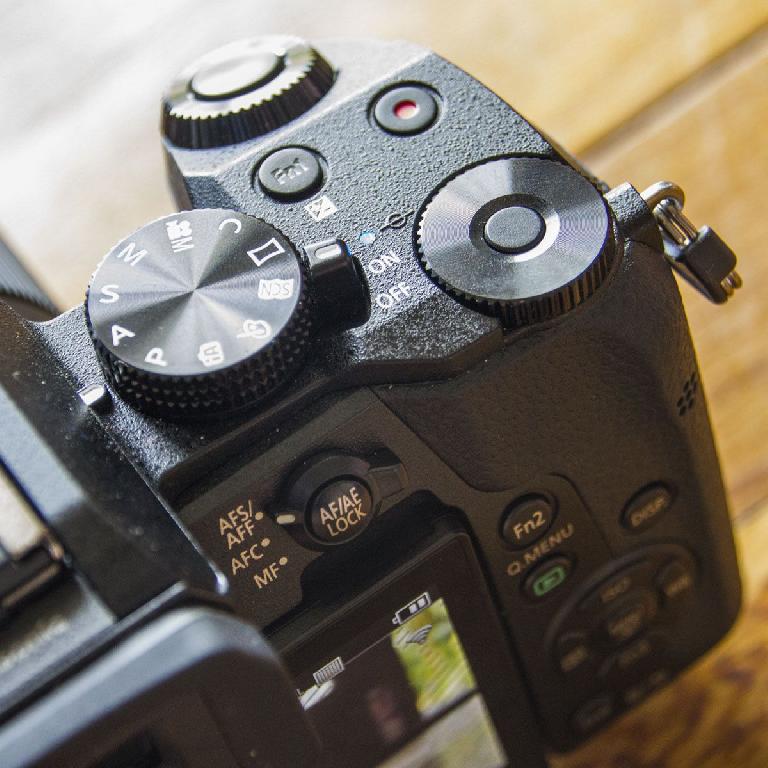 The right-hand side is where the action is

As well as touch, there are more dials, buttons and switches than you could ever want. Two mode dials on top are most welcome: one controls the video/stills/etc. mode you’re in, while the other switches between a variety of multiple exposure modes, including burst, bracketing, timelapse and more. Two more spinning dials control shutter speed and aperture by default, and a button switches the dials to control white balance and ISO instead. As well as the usual playback, menu, display and cursor keys, there’s a switch and button for controlling focus, another to record video, and a total of six physical buttons (and five virtual on-screen buttons) which you can reprogram. It’s a remarkably complex little beast, and you really can set it up to suit your own preferences—more on that later.

Using the same vintage lens with adapters, the Canon 550D (above) shows lower noise than the Panasonic G7 (below) on very similar settings

Compared to my Canon 550D or EOS M, the G7 comes up just a little short. The resolution is significantly lower, and there’s a little more noise in the G7’s images when pixel peeping. Handling differences mean that it’s quicker to get the shot on the G7, though. This is certainly a camera I’d use for family events when I want something better than an iPhone, but it’s not what I’d use when I want the absolute highest quality still images. 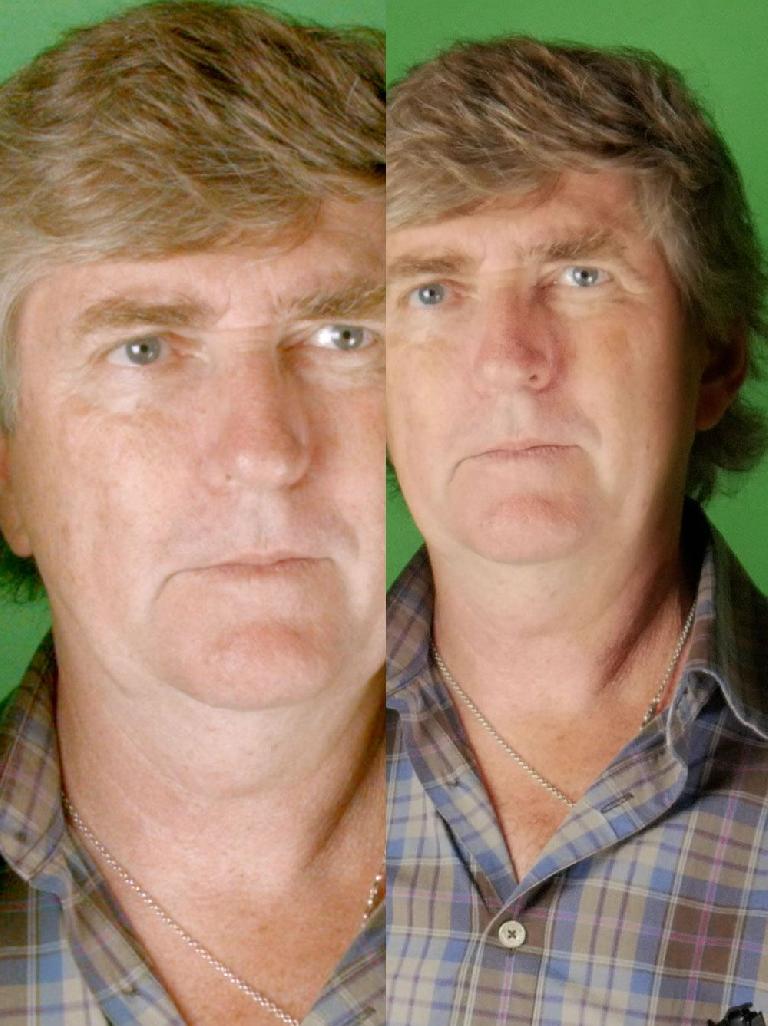 Really very good indeed. If you’re still delivering 1080p HD (as most us still are) then you’ve got the extra detail and reframing options of 4K with little-to-no downside. The 100Mbps H.264 video is very good for its data rate, and equals the sharpness and resolution (if not color) of my Blackmagic Cinema Camera’s oversampled, extremely detailed 1080p ProRes image. It’s not hard at all to match footage from these cameras on an HD timeline, and you can get pretty close in a 4K timeline if you enlarge the BMCC image and add an Unsharp Mask effect.

Throwing more and more pixels at a problem will solve some problems, but not all. In good shooting conditions, the true 4K of the G7 can simply capture more detail than the Blackmagic, but as soon as you need higher dynamic range or want to do heavy color grading, the BMCC wins out. Still, from a handling point of view, all the extra dials and buttons on the Panasonic make it much more flexible in day-to-day use. 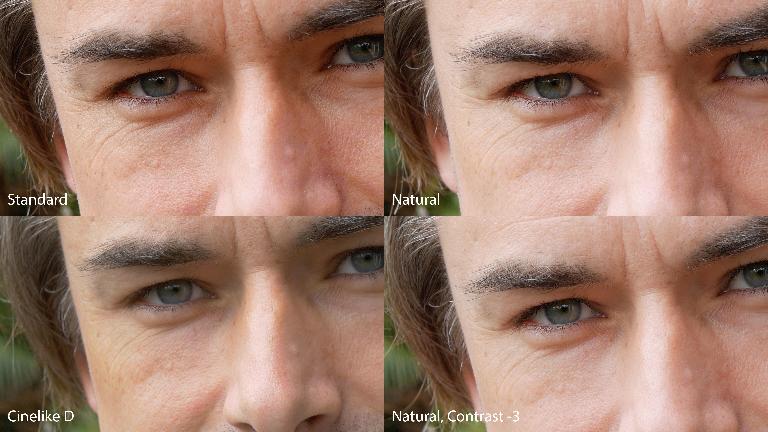 Four different settings compared—Cinelike D is quite different to the others in color and contrast (note: focus may have shifted between these shots, so don’t judge sharpness)

The H.264 footage only offers 8-bit color, so you’ll want to get relatively close to the final grade in camera. While Cinelike D offers a flatter image, it’s often not terribly flattering to people and can be tricky to grade back to a good point. My pick, at least for now, is to use the Natural color profile. It looks like Natural is a rough match for “Standard” set to -3 sharpness, which helps to make the image less “video-like”.

There’s a contrast adjustment in each color profile, and pushing this down a little can give you a little more room for creative grading choices later on. Natural on -3 Contrast seems like a good starting point, yet pushing everything to -5 feels like a step too far. There’s also global shadow/highlight feature that gives yet more control, but be careful—too much of this will make skin tones look too processed. 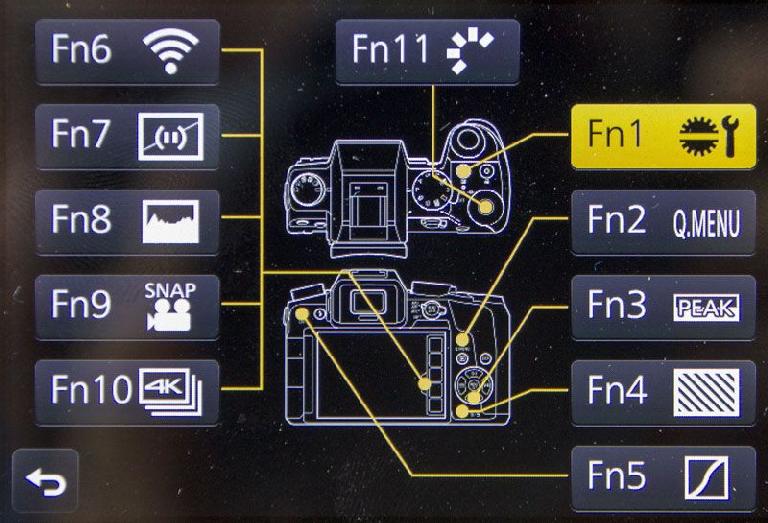 So many buttons, so many options

By default, the button in the center of the rear dial (unlabelled, but technically Fn11) changes the function of the two dials, from “shutter and aperture” to “white balance and ISO”. For easier operation, I’ve remapped the Fn buttons (“Spanner C” menu, page 7) so that Fn1 changes these dial functions instead. I’ve also swapped shutter and aperture around (the rear dial now controls aperture) but that’s personal preference. There are many, many ways to set up the other buttons, but Peaking, Zebra, Photo Style and Highlight/Shadow are my picks for now. 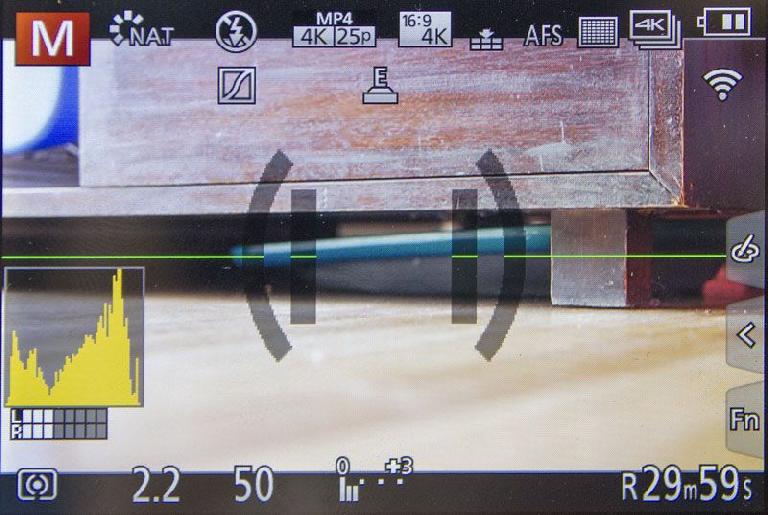 Finally, although many shooters will likely stay in the full-manual world, there’s a way to get automatic ISO in video mode while locking the shutter speed to the correct mode for video (1/50 in 25fps or 1/60 in 30fps). Set the right-hand dial to M (not “Video M”), then set the still aspect ratio to 16:9, and the left dial to 4K. In the “Spanner C” menu on page 5, set Constant Preview to On, then in the “Video” menu on page 3, set Flicker Decrease to your preferred shutter speed as noted above. Set ISO to auto, and the camera will automatically change ISO (not aperture) to adjust exposure—ideal for live run-and-gun situations. 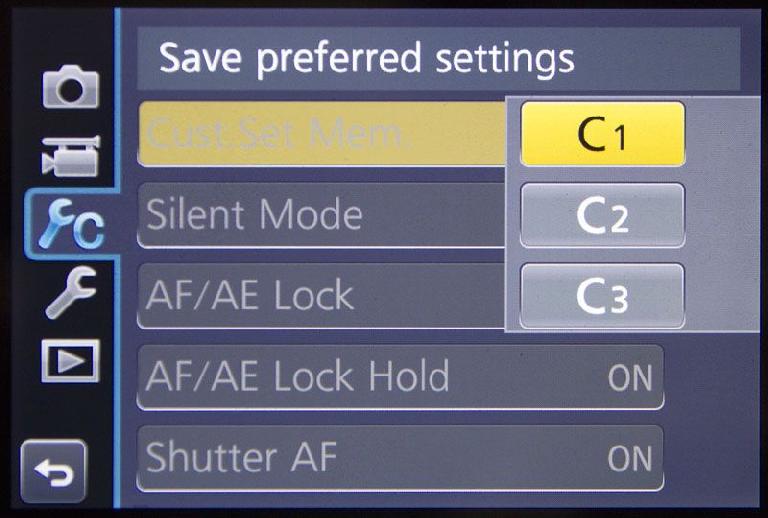 Once you’ve set up everything the way you want it, head into the menu, tap the “spanner C” button, then “Cust.Set Mem.” on Page 1, and save the options to one of the three custom presets. All the camera settings are then saved, and can be recalled when you set the right-hand dial to C. I’ve got C1 set up for full manual video and C2 for auto-ISO video.

It takes time to get to know this camera, and I’d recommend watching many GH4 and G7 guides and reviews to see what others have done. There is no one answer for everyone, and your preferred settings will change over time and from job to job. 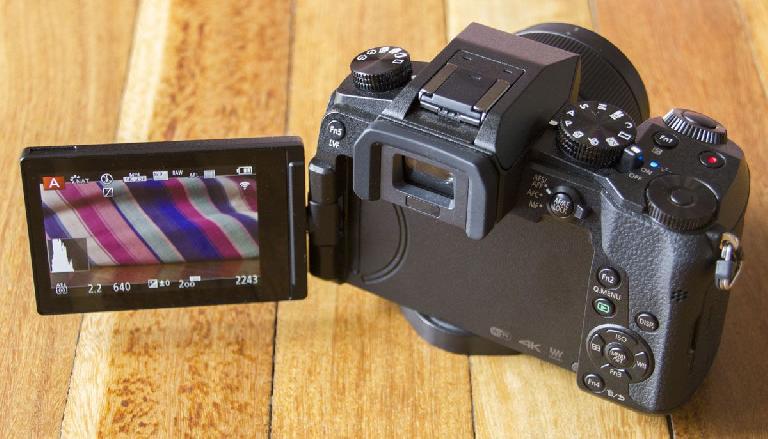 The Panasonic G7 with all its buttons and dials on show

Handling is great, image quality is very good, and it’s very affordable. While this isn’t necessarily the camera for a film school auteur-in-training, it’s an excellent choice for anyone who wants great quality 4K or excellent 1080p on a budget. There are better choices for color grading (Blackmagic, RED, Alexa, an external recorder with a 10-bit feed) and for low light (A7s) but the G7 hits a wide sweet spot. Definitely worth a look.