All Articles Review
Review: PSP 2445, Plug-In Reverb Emulation of EMT 244 / 245
Jay Asher on Tue, February 2nd 0 comments
Language
A software emulation of two classic EMT reverb units, the PSP 2445 is inexpensive, CPU efficient, and easy to use. Jay Asher finds out if it sounds impressive too.

PSP was one of the very first software developers I had a personal relationship with and I will always have a soft place in my heart for them.

These fine gentleman from Poland have over the years created a series of plug-ins that at bargain prices rivaled or in some cases exceeded far more expensive competitive plug-ins.

That said, when they notified me about the release of the PSP 2445 I was not very excited. I have a lot of good software reverbs. Doesn’t everyone? Do we need more?

The answer is, very possibly for you, yes. The PSP 2445 is an emulation of two classic reverberators, the EMT 244 and 245, In all candor, I have never worked with the hardware versions of either so I cannot speak from personal experience as to how close they come but some who have worked with them have said, very close indeed.

These units were and still are prized by many top engineers for their simplicity and excellent sound, and except for some convolution IRs of them, a serious emulation has not surfaced, as far as I know. The UAD emulation of the EMT 250 is the digital “kissing cousin” of these, but not identical sounding to me.

And while I love convolution reverbs for many things, I always want at least some algorithmic reverb on my tracks because they “breathe” in a way that the more static convolution IR based reverbs do not.

So when I read the praise for this new reverb plug-in from the likes of Michael Brauer, Steve Levine, and Bobby Owsinski, no slouches there, and saw that it is priced at only $129 US, well, it caught my attention.

And darned, if once again, I think PSP has done something really lovely here.

If you look at the title pic, you can see why right off the bat I have a favorable impression. If you have any experience with reverbs, you don’t need a manual. Everything is laid out in an easily accessible and clear fashion. I love that in a plug-in!

I can quickly switch between the 244 and 245 or mix them both; adjust the input level, pre delay time, reflections, and reverberation time; tweak filters, mix, balance, and width, etc.

I started with a plain EMT 245 preset, which you hear in Audio Example 2.

Very nice, in my opinion, it sounds really clear, and expensive to me. I now switched to the 244 preset and it really was very similar, maybe just a smidge brighter. As you can see in the 244 preset Pic 1, it doesn’t add delay, just reverb and the same is true of the 245 preset. 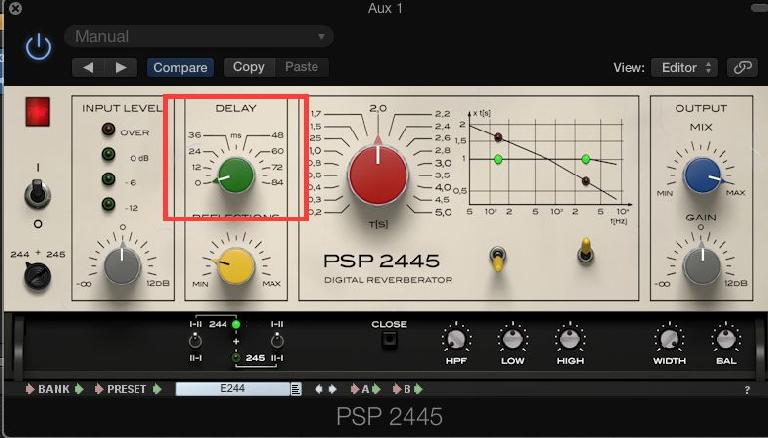 Using a Preset with Both Reverb and Delay

Since this will do both, why not hear both? â˜º Notice in Pic 2, that it defaults to the 244 with the Slap Back preset. Switching to the 245 again did not make a lot of difference to me. (In general, however, for whatever reasons, I seem to prefer the 244, but you can actually mix the two.) 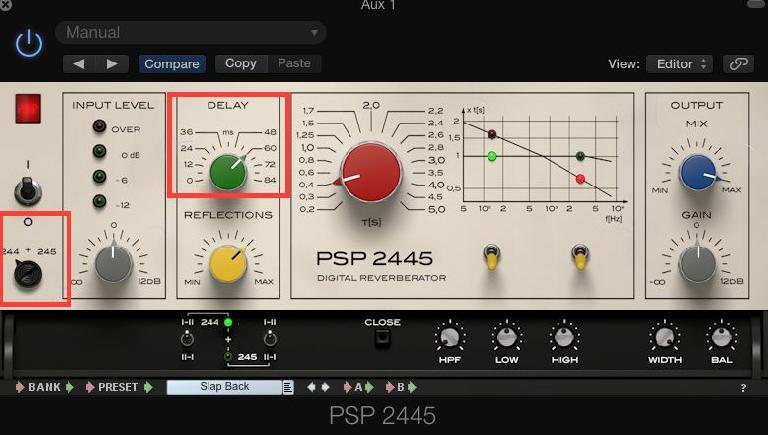 The only change I made from the preset was to turn up the low pass filter a little. You can hear the result in Audio Example 3.

Really nice! I compared it to the Slap Back preset in the UAD EMT 250 and man, they sound really close. The PSP 244 is a little less dense but if I monkey with the filters, I am pretty sure that maybe only those with “golden ears” could consistently identify them discretely in a blind test. And you don’t need a UAD card for this.

Using a Preset for Drums

Vocals, shmokals, let me hear some drums, man. Here is one of my new favorites, the “80’s Drum Verb 2. 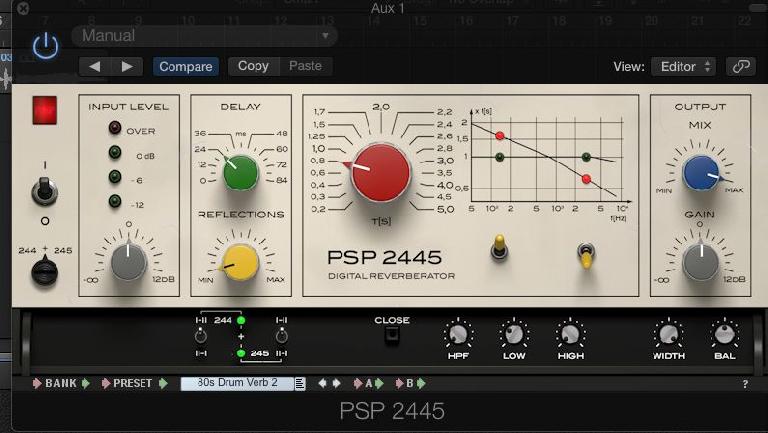 There are a lot of nice software reverbs in the marketplace. I am fortunate to have many choices in my personal arsenal. However, if you were to say to me that you were going to deprive me of all of, them leaving me only the PSP 2445 and one good convolution reverb, well let’s just say I would not be sitting in my studio in tears. This deserves your serious consideration and with a  fully functional 14-day trial version demo available, no risk to you.

Pros: Inexpensive but does not sound inexpensive, easy learning curve, and easy to read and understand GUI. Light on CPU.

Cons: None really, unless you just don’t personally respond to the sound.

While you are there, check out some of their other fine plug-ins. Personally I am especially fond of the PSP Xenon, PSP 85 and PSP N2O.