All Articles Web
Creating Perfect Instagram Pictures
Elaine Ashburn on Sat, May 3rd 0 comments
Language
Instagram can be a fun way to share photos & videos but if your images aren't up to scratch, they may not get the attention they deserve. Here's how to take perfect pics before you share them.

Instagram is a fun way to share photos or videos with friends and family. Unfortunately not every photo is worthy of its fifteen seconds of fame, but with a little knowledge and some Instagram filters we should be able to change that.

Let's start with a picture; any picture

I just took a picture of my keyboard with the sun shining through the blinds on it. The rays of light in my original image are the only thing memorable about this image (Pic 1). But let's change that. If you play around with the Instagram filters, you'll see that they can vastly improve even an image as deadly dull as a keyboard. I liked what the '˜toaster' filter did to this image. The effect is pretty dramatic. It added an aged, almost burnt-toast quality to my picture. Of all the filters, I think this one enhanced that image the best (Pic 2).

What it actually does: It dodges the center, vignettes the edges and adds a warm peachy tint to the image. 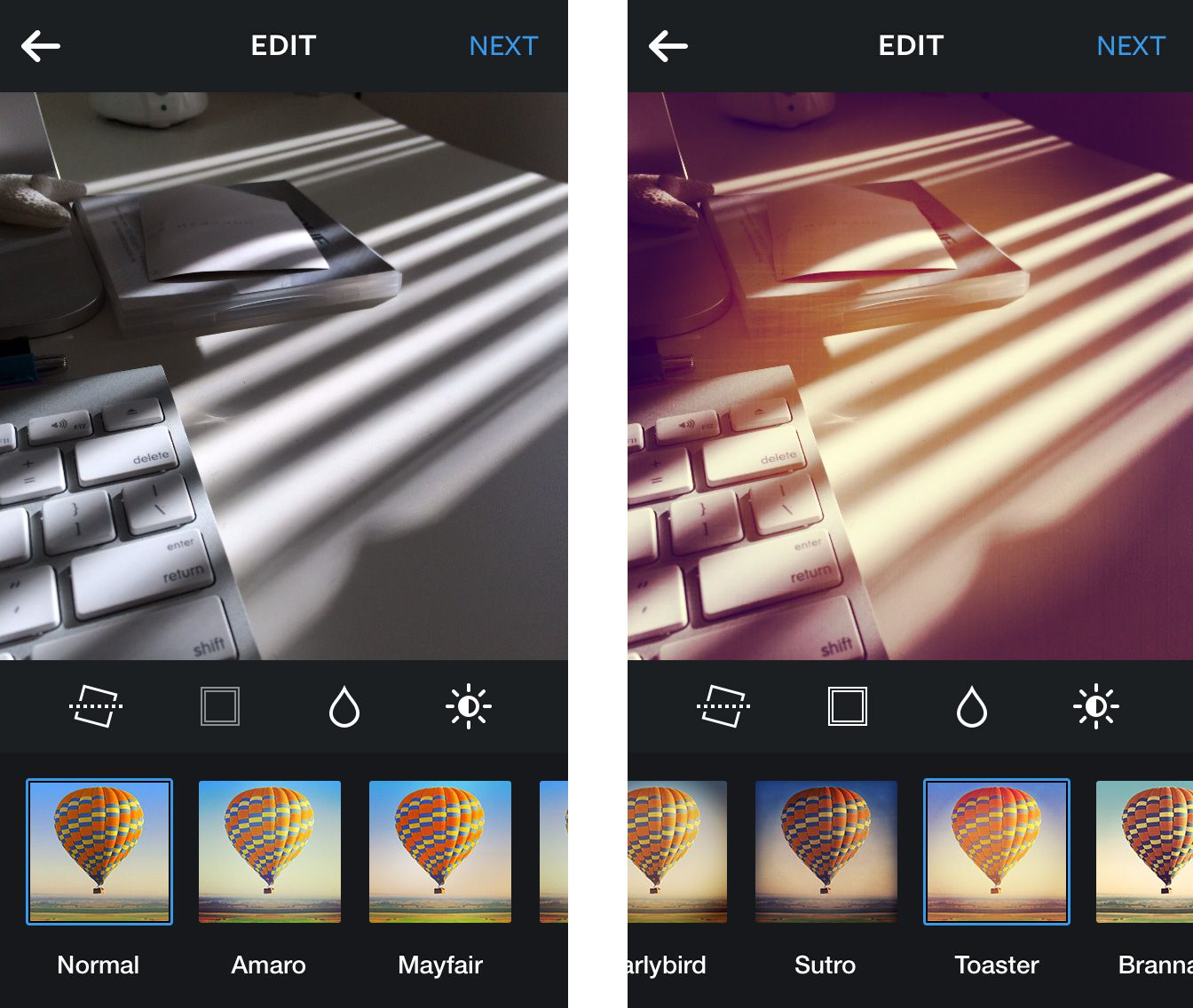 I wanted to see what Instagram could do with food since so many of us capture our dinners and send to each other. Here's a '˜shared chocolate cake' from the other night (Pic 3).

I found two filters that successfully enhanced my chocolate crumbs. '˜Nashville' and '˜Hudson'. The Nashville filter seemed to add a pink cast to the image and softened it as if shooting through gauze (Pic 4). This brought out the crumbs and cocoa dust nicely. The Hudson filter did just the opposite; it added a cool tint that made it feel almost icy. This brought out the silvery tones in the two forks (Pic 5).

What they actually do: Nashville': It's a high exposure, low contrast filter that adds an overall warming effect to the image. '˜Hudson': It dodges the center and enhances your shadows and adds an overall cool tint. '˜ 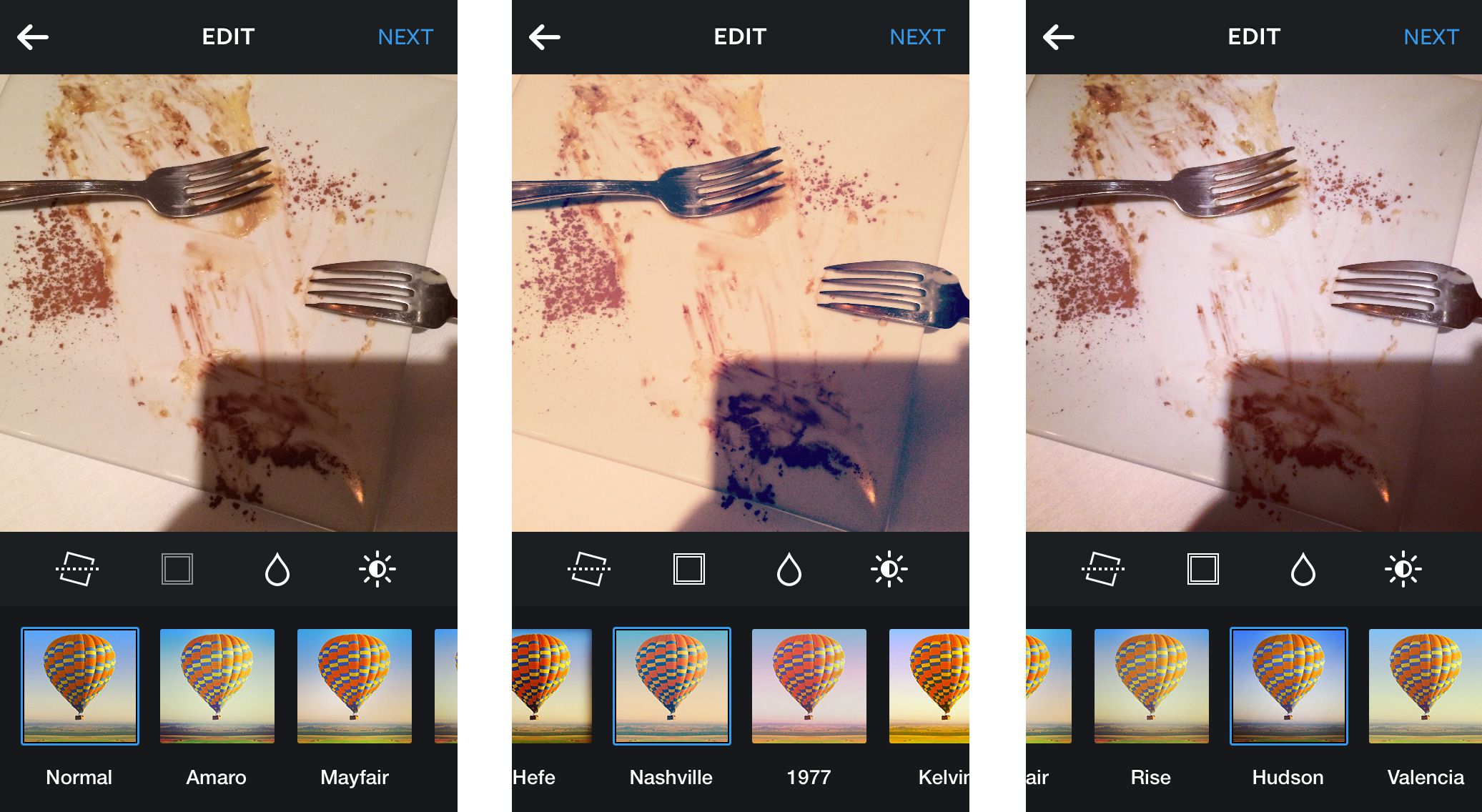 Let's try pizza! My original image is a little on the flat side as I was just trying to capture the overall look of the fresh-out-of-the-oven pizza I made. Instagram has a built-in brightness/contrast filter, I clicked on that first (Pic 6). Then I played with some filters to see if I could make this magazine-perfect. I liked what '˜Rise' did to my pizza. It added a golden glow and a slight diffusion. I then hit the brightness/contrast button again and was pleasantly surprised with the outcome (Pic 7).

What the filters actually do: The '˜Rise' filter enhanced the exposure slightly and it added a general warm-yellow tint. The brightness/contrast filter brightened up my image overall and bumped up the contrast. 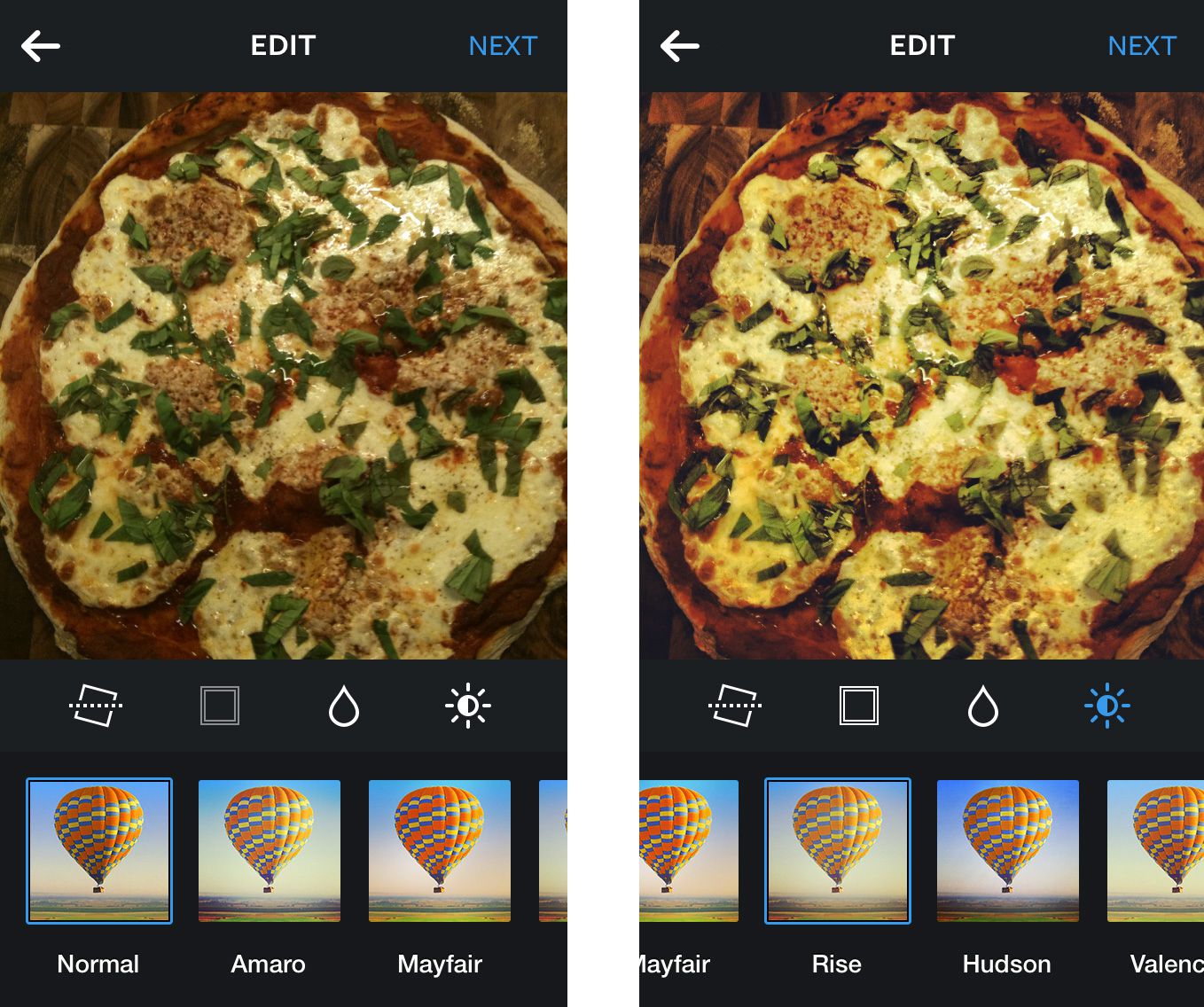 I took a bunch of pictures last week when we had brilliant sunshine. While the original is dramatic on its own, I wanted to see what Instagram could do to it (Pic 8). Once again I went through the gamut and hit on all the filters until I found one that took my image to another place. This time it was '˜Lo-fi' that did the trick. You can see how it made the shadows darker, the whites warmer and super-saturated the entire picture. It's effects like this that make Instagram so cool (Pic 9).

What it actually does: The Lo-Fi filter gives your image a high saturation of color and warm temperature which instantly richens colors and boosts shadows. 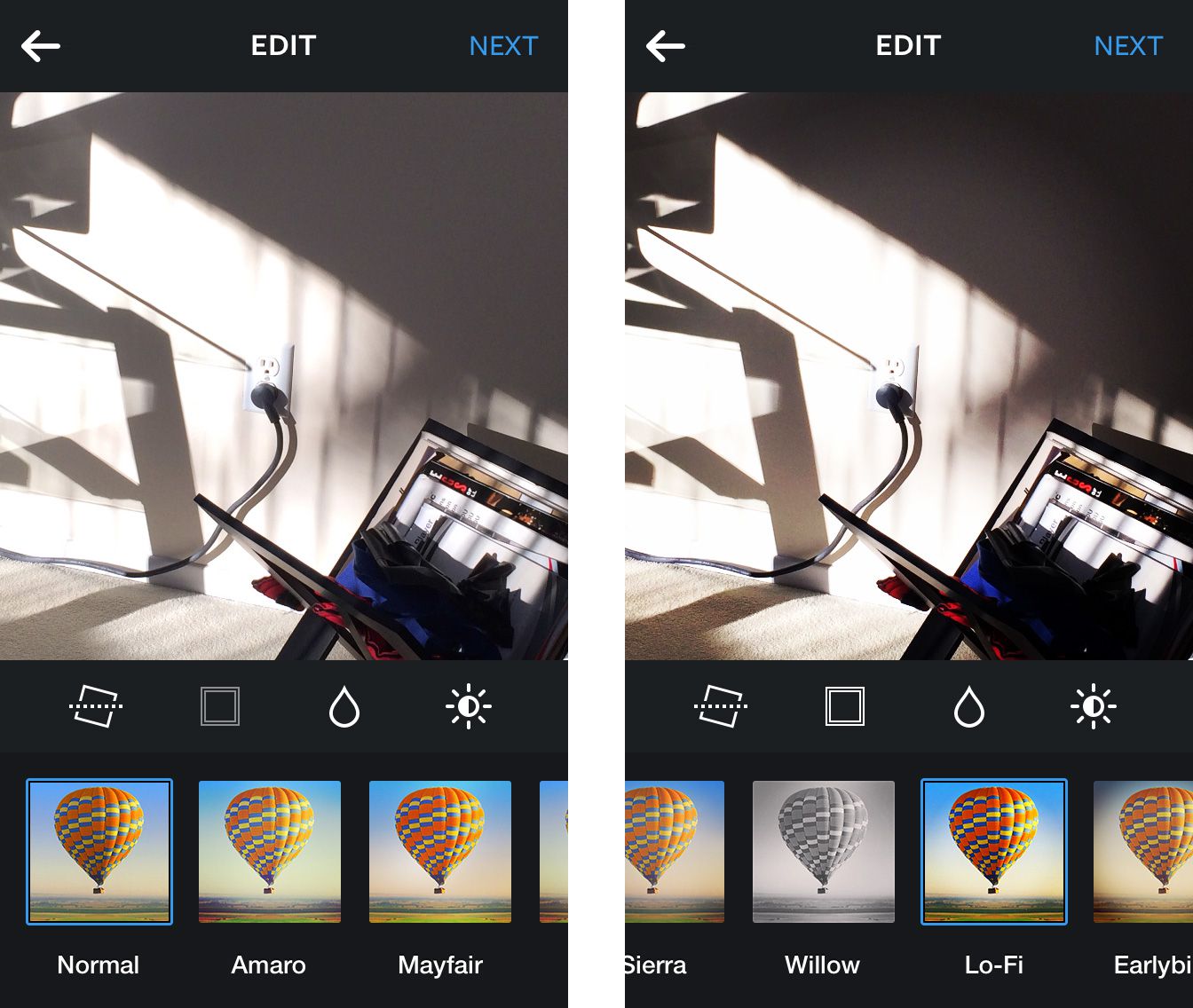 I wanted to see what Instagram could do to an already soft image. I took this picture of a store mannequin through a plate-glass window on a search for ice cream over the summer (Pic 10). First I bumped up the contrast, which by itself made the picture much more interesting (Pic 11). Of course I couldn't stop there, so I started playing with filters, this time from the back. About three from the end I found '˜Hefe'. I liked how it brought out the wood grain behind the image. When I compared it to the original, I was actually shocked to see how much improved these combinations of filters made my mannequin (Pic 12).

What the filter actually does: It looks to me like this is the same as Lo-Fi but with a slightly lower exposure. It slightly vignettes the edges of the photo, and gives it a high contrast, high saturation look and feel. 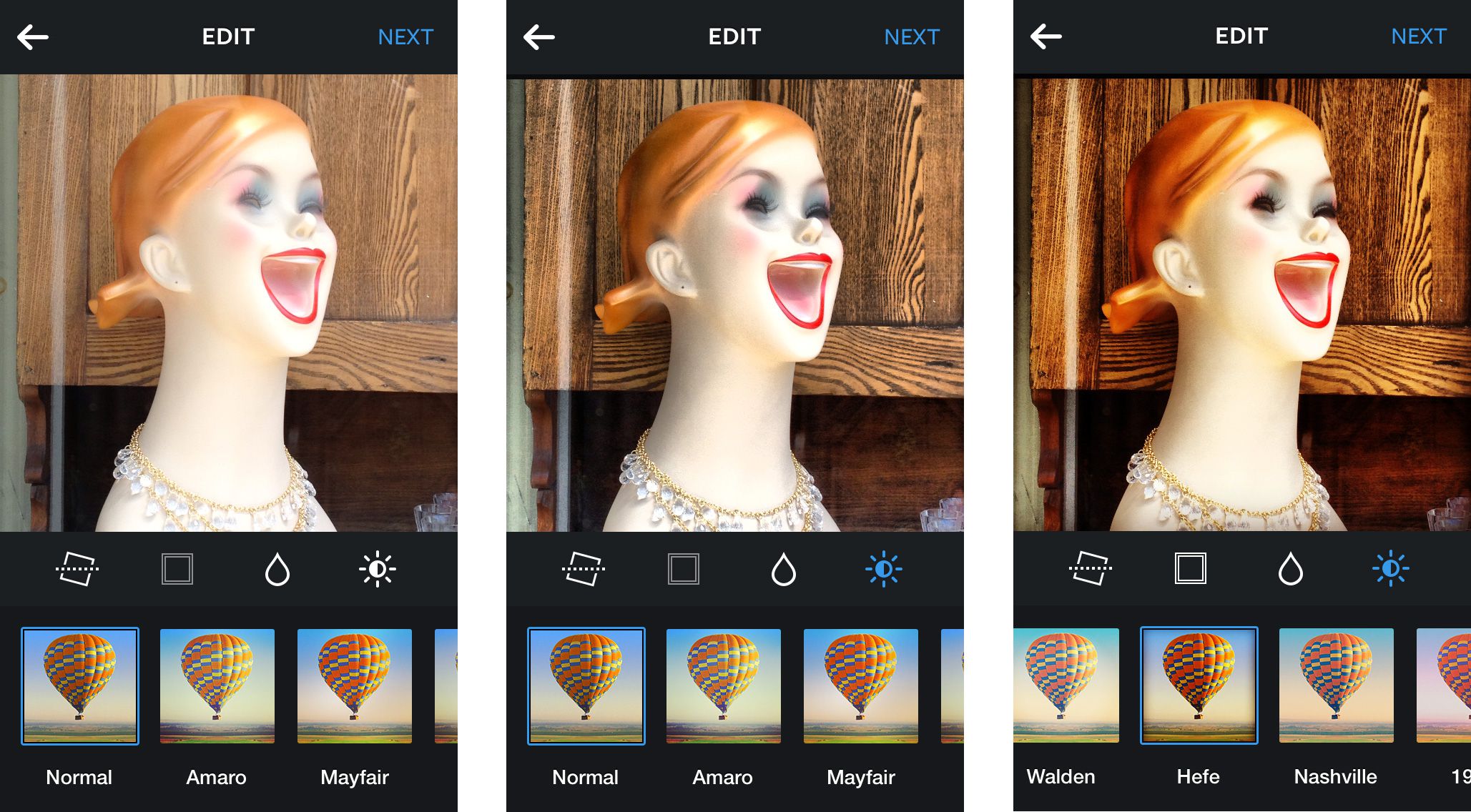 I've tried food, images with shadows and soft images, but I've yet to try this with a landscape. I found this landscape picture I took last year. It's an artists' installation, not some kind of graveyard, although I'm not quite sure what it was supposed to represent. Anyway I did find it interesting enough to take a picture of, so let's use this to see how Instagram can enhance a landscape shot (Pic 13). Again, I added brightness and contrast, but then decided to take it off and see what a straight filter could give me. I'd read somewhere (probably back in art school) that the human eye is attracted to blue hues, so I tried to get the bluest effects I could. I initially went to a filter called '˜Inkwell' thinking it would give me an indigo feel. It didn't'"it changed my image to black and white (Pic 14). A nice feel, but not what I was looking for. Not exactly blue, but '˜Sutro' gave me a nice eerie, Goth effect. I can almost see zombies walking across this field, couldn't you?(Pic 15) I hadn't tried the blur tool yet, so I wondered what that would do to this image, so I clicked on it and realized that just by moving my finger around, I could change the hot spot on the blur filter, so I moved it to one of the crosses and was pleasantly surprised by the effect (Pic 16).

What this filter actually does: It gives your picture burned edges, and dramatic highlights and shadows while adding an almost sinister tone to the image.

I really like the effects that Instagram produces and have tried to replicate them on ad campaigns I'm currently producing. They make everything feel trendy and youthful; something to keep in mind if you're trying to capture the eye of a younger audience.