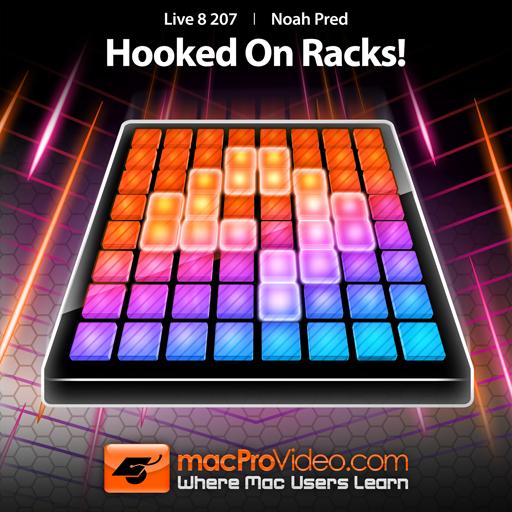 Noah Pred
Noah Pred is an accomplished composer, performer and Ableton Live Certified Trainer. He has been performing technologically driven music worldwide for the past decade.
Watch Free Previews!
View up to 5 free videos from ANY course each day.
Out of free previews? Come back tomorrow to watch some more!
Get A Library Pass!
Watch this course – and ALL macProVideo.com courses – for as long as your pass is active.
Purchase just this course! Watch it anytime, for life.
To download & view offline, use our
NonLinear Educating Player Software.
Overview
Status: Available | Released: Sep 8th, 2011
RACKS RAWK! –And nobody knows how to use Liveʼs Racks better than Rack Master Noah Pred. In this advanced Live tutorial, Noah rips into Racks and all the very rad stuff you can do with them.

Youʼll learn all about Instrument and MIDI Racks and all about assigning macros. Noah then explains how to customize Racks by assigning key and velocity zones; but thatʼs just the beginning. From there Noah takes you through a ton of advanced features where he explains why Multi-Chain MIDI FX with innovative chain selection combined with macros are the way to go! WHEW! If you donʼt understand that last sentence then, like all of us at MPV, youʼve GOT TO WATCH THIS TUTORIAL!

Finally, Noah builds some amazing sound explorations that incorporate parallel audio processing using multi-band and Rack within Rack techniques. This tutorial is required viewing for every Ableton Live user who wants to take Live beyond the presets and develop their own signature production sound! So join ”Rackologist” Noah Pred in this awesome exploration and soon you too will be Hooked On Racks!

Check out macProvideo.com's other Ableton Live 8 titles. Build a bundle and save up to 50% off list price!
Outline
Section 1: Section 1: Introduction
Section 2: Section 2: Macros
Section 3: Section 3: Zones
Section 4: Section 4: Creating a Rack
Section 5: Section 5: MIDI
Section 6: Section 6: Effect Racks
Section 7: Section 7: Conclusion
Other courses in this series
What to do next
Embed Video
Embed this video in a blog, forum post, or webpage.