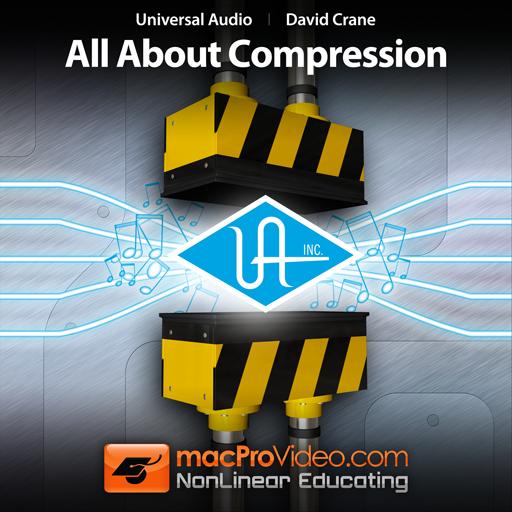 Universal Audio
UA: All About Compression
Genre: Audio
Learn all about compression from the company that practically invented the compressor: Universal Audio!

David Crane
Dave Crane is well known as the "Universal Audio guy", and has been producing tutorial videos for UA for many years.
Watch Free Previews!
View up to 5 free videos from ANY course each day.
Out of free previews? Come back tomorrow to watch some more!
Get A Library Pass!
Watch this course – and ALL macProVideo.com courses – for as long as your pass is active.
Purchase just this course! Watch it anytime, for life.
To download & view offline, use our
NonLinear Educating Player Software.
Overview
Status: Available | Released: Jan 14th, 2011
In this tutorial Universal Audio compression expert David Crane takes you on an extensive tour of UA’s vast line of virtual compressors. You’ll learn about the 1176LN, Teletronix LA Series, DBX 160, Fairchild, Fatso, UAD Mastering and Channel SSL 4000, Neve® and the amazing Precision line of emulated compressors.

Through an engaging 2-hours of tutorial-videos, David takes you on a journey through UA's “hardware-based” history and then explains how Universal Audio’s new emulation plug-ins are designed to reproduce their hardware ancestor’s classic sound while simultaneously adding enhanced functionality. This tutorial is filled with before-and-after audio excerpts that enable you to listen to how these incredible compressors are optimized for use on drums, bass, guitar, piano, vocals and on the mix bus.

Universal Audio is one of those iconic companies whose innovations in the recording industry span almost 60 years. Their unparalleled hardware compressor designs created by their sister company UREI, including the ubiquitous LA-2A, LA3-A, LA-4, 1176, are products that transformed the sound of recorded music.

Even if you don’t own any of these UA compressors you will learn compression techniques that you’ll be able to apply to any compression plugin-ins you own.