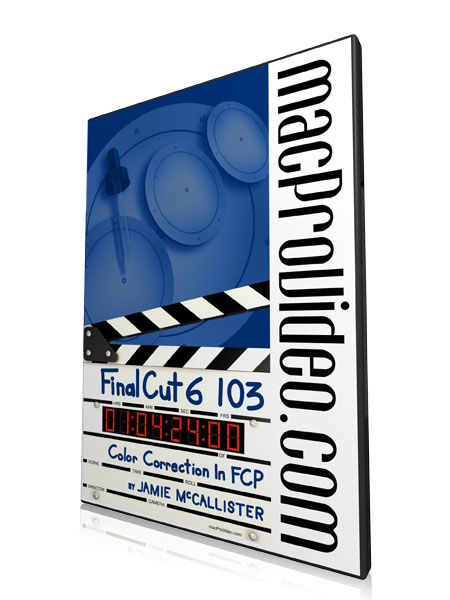 Final Cut 6 103
Color Correction in FCP 6
Genre: Video
Color correction can dramatically improve the look of your video. And it's easy to do when you know a few tricks. These video tutorials show you how!
Skills:

Jamie McCallister
Jamie McCallister has knowledge and experience that surpases most people in this industry. Based in London (UK), Jamie teaches and supports high-end clients around the world, including the BBC, Granada, MPC, Sony Pictures, and Apple themselves.
Watch Free Previews!
View up to 5 free videos from ANY course each day.
Out of free previews? Come back tomorrow to watch some more!
Get A Library Pass!
Watch this course – and ALL macProVideo.com courses – for as long as your pass is active.
Purchase just this course! Watch it anytime, for life.
To download & view offline, use our
NonLinear Educating Player Software.
Overview
Status: Available | Released: Jul 1st, 2005
Color correction is one of Final Cut Pro 6's most useful functions, and it should be part of every video workflow. You can pop colors and saturation, filter the haze out of DV footage, and even isolate colors to create advanced video effects.

In this tutorial you'll learn the theory and practice behind Final Cut's Waveform Monitor, Vectorscope, Histogram, and RGB Parade. These are essential tools used to analyze the color and luminosity of your video streams. If you have a video that's washed out or dull, this video will show you how to fix the problems.

Impress clients, family, and friends by making your video look stunning. This is absolutely essential information - don't let your videos look amateur! It's easy to get a pro look when you know how to use Final Cut Pro's 3-Way Color Corrector!