Bill Burgess
Bill Burgess is the former Pro Audio Product Marketing Manager and Logic Pro Artist Relations Manager for Apple Inc. He's also a brilliant software educator with long experience teaching audio producers how to make music!
Watch Free Previews!
View up to 5 free videos from ANY course each day.
Out of free previews? Come back tomorrow to watch some more!
Get A Library Pass!
Watch this course – and ALL macProVideo.com courses – for as long as your pass is active.
Purchase just this course! Watch it anytime, for life.
To download & view offline, use our
NonLinear Educating Player Software.
Overview
Status: Available | Released: Jul 30th, 2009
Ableton Live 8 is an amazing audio production and live performance tool. But all the incredible features that are packed into this software means the learning curve is steep! Don't let that deter you though ... with a bit of training you'll soon know how to *think* like Live, and that will make it faster and easier for you to create your artistic visions.

In this 6.5-hour Ableton Live 8 tutorial-video by Lead macProVideo.com trainer Bill Burgess, you'll learn incredible tips, tricks, and workflow techniques that will help you become a master of Live 8.

The tutorial begins with an exploration of the Ableton Live 8 interface and a detailed section on setting up your external studio gear to work seamlessly with Live. Once your gear is connected and talking to Live 8, you'll move on to explore file management, working with tempo, and other basics of audio production.

Next, the tutorial gets deep into the killer features of Ableton Live 8, including using Warp Markers to alter the tempo and pitch of loops-the foundation of Live's amazing audio abilities!

You'll then explore recording audio, working with MIDI and Live 8's included instruments, using device racks and adding DSP effects to your song, mixing techniques, and finally, some incredible videos on automating Live so your songs evolve over time.

The tutorial ends with a section on creating live sets in Ableton Live 8. You'll learn how to incorporate the much-hyped APC-40 into your sets, and even explore working with video in your Live shows. 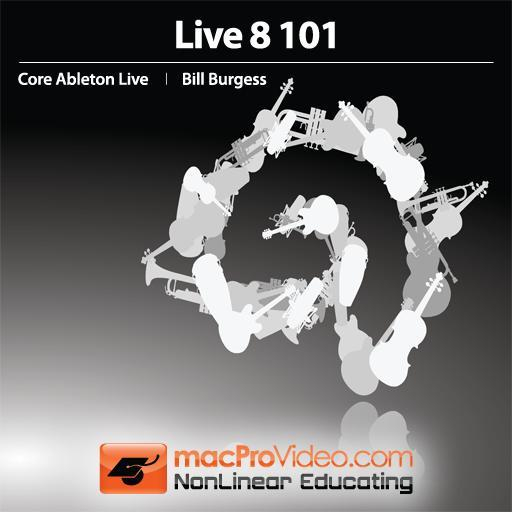