Live 9 100
What's New In Live 9
Genre: Audio
Live 9 is here and so is our FREE "What's New" course. Hang out with GW Childs and see the cool new features in Ableton's latest DAW masterpiece...

G.W. Childs IV
G.W. Childs is an audio & video production powerhouse whose credits span the gamut from work with the US Department of Defense to soundtracks with LucasArts and remixes for James Brown & Ray Charles.
Watch Free Previews!
View up to 5 free videos from ANY course each day.
Out of free previews? Come back tomorrow to watch some more!
Watch this course absolutely free!
Overview
Status: Available
This course starts off with a detailed look at the browser and it's new, easier to use, well organized format. Then you get a tutorial on the Harmony To Midi function and see it in action... It's pretty cool! Learn the melody and drum Convert To Audio functions. Witness all the new MIDI Editing and Automation features. Yes, and now Live's got beautiful automation curves. They're gorgeous!

Finally, GW builds a simple track (what do you expect for free?) to show you some of the new plugins like the amazing new Glue Compressor which is guaranteed to hold you tracks together no matter how loose they are!

What's also cool is how all of Live 9's new features are designed to work together to help make you make better sounding tracks!

So sit back and see What's New and then be sure to check out all of our ever-expanding library of Live 9 and Push courses as we continue to build the most comprehensive Ableton course library on the planet!
Outline
Section 1: Section 1: What's New?
Section 2: Section 2: The New Browser
Section 3: Section 3: Scene
Section 4: Section 4: Convert Harmony to MIDI
Section 5: Section 5: Converting a Melody
Section 6: Section 6: MIDI Editing
Section 7: Section 7: Automation
Section 8: Section 8: Building a Project
Section 9: Section 9: Conclusion
Other courses in this series
What to do next
Embed Video
Embed this video in a blog, forum post, or webpage. 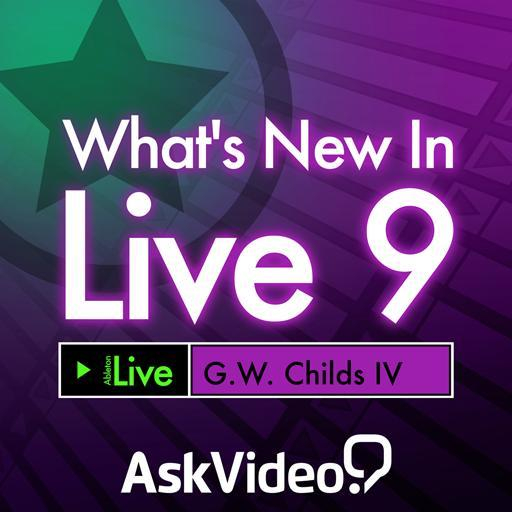