Logic Pro X
10.1 New Features: Explored
Genre: Audio
Wow! Apple has packed a lot of new features and enhancements into this Logic Pro X 10.1 release. Join sflogicninja, David Earl, in this FREE first look, as he dives into some of the hottest new additions.

David Earl
David Earl is a composer/producer and Logic Studio guru living in the San Francisco Bay Area. You've seen him on YouTube, now watch his work at macProVideo.com!
Watch Free Previews!
View up to 5 free videos from ANY course each day.
Out of free previews? Come back tomorrow to watch some more!
Watch this course absolutely free!
Overview
Status: Available | Released: Jan 23rd, 2015
This 10.1 release covers a lot of new ground both functionally and creatively. This 12-tutorial FREE first look, by Logic expert David Earl, gives you a high-level intro to some of the coolest new stuff. From new Drummers and content to powerful, pro automation tools and Piano Roll editing tools, you see them all.

One of the hottest new additions is Drum Machine Designer. This powerful, plugin-like controller allows you to ‘design' the ultimate beat machine. It comes packed with a powerful library and, of course, you can make your own as well! We also love the new Compressor. It not only looks beautiful, it sounds fantastic too... especially with the new vintage addition!

There's so much in this latest release that you can be sure that we are conjuring up some amazing new in-depth courses. But, in the meantime, join David as he takes you on this FREE flyover of Logic's 10.1 update!
Outline
Section 1: Section 1: Cool New Features
Other courses in this series
What to do next
Embed Video
Embed this video in a blog, forum post, or webpage. 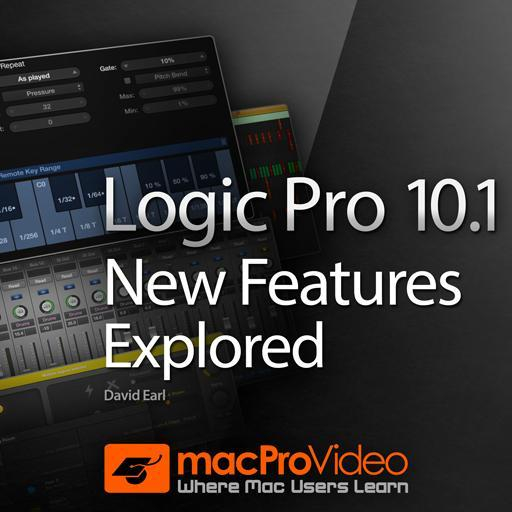