Logic 7 105
Logic's Environment Explored
Genre: Audio
You may have heard that Logic is an object-oriented audio editor. The Environment window holds the key to understanding why ....
Skills:

Martin Sitter
Apple's original courseware author for Logic Studio, Soundtrack Pro, & DVD Studio Pro, Martin Sitter is a best-selling technical writer, and the founder of macProVideo.com!
Watch Free Previews!
View up to 5 free videos from ANY course each day.
Out of free previews? Come back tomorrow to watch some more!
Get A Library Pass!
Watch this course – and ALL macProVideo.com courses – for as long as your pass is active.
Purchase just this course! Watch it anytime, for life.
To download & view offline, use our
NonLinear Educating Player Software.
Overview
Status: Available | Released: Aug 1st, 2005
Logic's Environment is quite possibly the single biggest reason behind the myth that Logic is hard to understand. And that's a shame, because the Environment is tailored to make music creation easier.

Once you've properly configured Logic's Environment, each time you go back to a presaved song, Logic will automatically reach out to your studio's MIDI devices and set them up exactly the same as the last time you saved the song. There's no need to find or reprogram patches ... Logic will do that for you, and you'll learn how in the first part of this program, The MIDI Environment.

Part 2 of the program, The Audio Environment explores Logic's internal audio channels, including audio tracks, audio instrument tracks, busses, and output channels. You'll also learn some extra tricks, such as how to customize object icons with your own images.

The Environment window is really your friend. Check out the table of contents below to see why.
Outline
Section 1: ENVIRONMENT OVERVIEW
Section 2: GETTING MIDI INTO LOGIC
Section 3: USING OBJECTS
Section 4: INSTRUMENT OBJECTS
Section 5: WORKING WITH PATCHES
Section 6: AUDIO CHANNELS
Section 7: TRICKS WITH OBJECTS
Section 8: SIGNAL-PATH TRICKS
Other courses in this series
What to do next
Embed Video
Embed this video in a blog, forum post, or webpage. 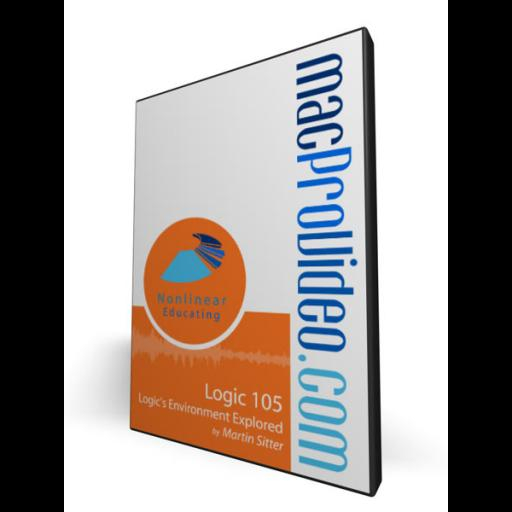