David Earl
David Earl is a composer/producer and Logic Studio guru living in the San Francisco Bay Area. You've seen him on YouTube, now watch his work at macProVideo.com!
Watch Free Previews!
View up to 5 free videos from ANY course each day.
Out of free previews? Come back tomorrow to watch some more!
Get A Library Pass!
Watch this course – and ALL macProVideo.com courses – for as long as your pass is active.
Purchase just this course! Watch it anytime, for life.
To download & view offline, use our
NonLinear Educating Player Software.
Overview
Status: Available | Released: May 2nd, 2012
In this tutorial, FM Synthesis and Sound Design, MPV expert trainer David Earl takes you on a wild, carrier wave ride showing you all you need to know about FM synthesis and how to program synth sounds that add depth and punch to your productions!

David ignites this tutorial with an incredible history of FM synthesis. From there he explores all the nooks and crannies of the FM8's well-stocked "sonic kitchen" and shows you how every knob, button and slider works. Now you're ready to jump in and do some real programming! Mr. Earl dissects the FM8's incredibly versatile Arpeggiator and shows how you can make your notes sing and dance just about any way you like. You'll also learn how to morph your sounds using the super intuitive Morph pad, where you can load in some of your favorite presets and mix 'n' match 'em to concoct a delicious sonic stew!

Wanna go even deeper? Good, because the FM "Ninja" chef Mr. Earl also unveils the FM8's Expert section where all the extra secret sauces are hiding. He'll also show you how to create rich brass and bell tones and play with the envelopes of the sound to make it come alive. Finally, David starts cooking the Modulation Matrix where you'll learn why routing is so important in the FM8 and how it dramatically affects your FM synthesis creations.

So, if you've always wanted to take a bite out of FM synthesis, David Earl is here to guide you to where all the FM goodness hides! So sit down, grab your utensils and sink your teeth into this FM8 tutorial masterpiece!
Outline
Section 1: Section 1: Exploring the FM8
Section 2: Section 2: Arpeggiator & Morphing
Section 3: Section 3: Creating Tones
Other courses in this series
What to do next
Embed Video
Embed this video in a blog, forum post, or webpage. 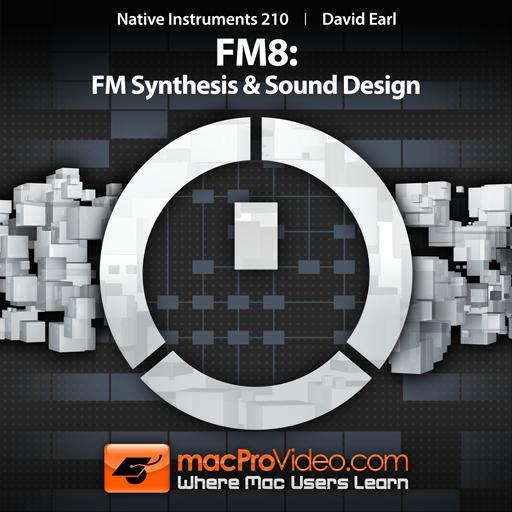