Pro Tools 102
Exploring The Workspace
Genre: Audio
Every DAW has its own unique way of making music and manipulating sound. In these AVID Learn Partner tutorial-videos by audio expert Bill Burgess, you'll learn about Pro Tools 10's tracks, tools, navigation tricks to get you started producing and recording music right out of the box...

Bill Burgess
Bill Burgess is the former Pro Audio Product Marketing Manager and Logic Pro Artist Relations Manager for Apple Inc. He's also a brilliant software educator with long experience teaching audio producers how to make music!
Watch Free Previews!
View up to 5 free videos from ANY course each day.
Out of free previews? Come back tomorrow to watch some more!
Get A Library Pass!
Watch this course – and ALL macProVideo.com courses – for as long as your pass is active.
Purchase just this course! Watch it anytime, for life.
To download & view offline, use our
NonLinear Educating Player Software.
Overview
Status: Available | Released: Nov 3rd, 2011
In the 101 you leaned how Pro Tools works. It's time to learn how to use it! So let's begin by Exploring The Workspace. In this collection of AVID Learning Partner tutorial-videos you'll learn all about the Pro Tools user interface, the tools and everything else you need to start making music in Pro Tools 10. Bill then takes you on a tour of the main windows, Edit and Mix, where you'll master Clips, Record and Playback controls, Shortcuts, Signal Routing, Track Lists and Mix Groups. Then you'll study the customizable Transport, learn about Timescales and Rulers and create some custom views.

Now it's time to set up a session. In this section the entertaining "Mr. Bill" begins by setting up Session Templates and Parameters. He shows you how to use the different track types and how to name them. In the last section you'll learn how to control the Playback Cursor, the Edit Cursorand all the different Scrolling Options.

Whether you're studying for AVID Certification or simply brushing up on your Pro Tools 10 skills, this Exploring The Workplace course is designed to get you started on the right track!

This course, originally created in an earlier version of Protools, is forward-compatible with the most recent version.
Outline
Section 1: Section 1: Inside Pro Tools
Section 2: Section 2: Setting Up a Session
Section 3: Section 3: The Edit Window
Section 4: Section 4: The Mix Window
Section 5: Section 5: Timelines & Toolbars
Section 6: Section 6: Master Review
Other courses in this series
What to do next
Embed Video
Embed this video in a blog, forum post, or webpage. 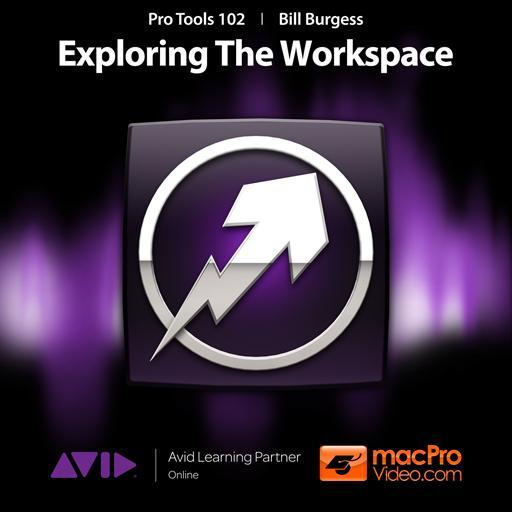