Reason 5 101
Core Reason 5
Genre: Audio
Reason 5, is here with its fantastic new synths and updated functionality. This tutorial, taught by Scott Freiman, is the perfect way to master Reason's synths, its rack-based construction, and its incredibly flexible rear panel patching. Join Scott as he takes us on an in-depth exploration of this classic, rack-based powerhouse.

Scott Freiman
Scott Freiman is a renaissance man ... both an award winning musician and entrepreneur, Scott has a long history of composing and producing great music.
Watch Free Previews!
View up to 5 free videos from ANY course each day.
Out of free previews? Come back tomorrow to watch some more!
Get A Library Pass!
Watch this course – and ALL macProVideo.com courses – for as long as your pass is active.
Purchase just this course! Watch it anytime, for life.
To download & view offline, use our
NonLinear Educating Player Software.
Overview
Status: Available | Released: Sep 9th, 2010
Reason 5 is here and it's better than ever! And star trainer, Scott Freiman, is back to teach us everything we need to know about this world renowned DAW.

With a rack-load of new synths and a ton of updated features, Reason 5 has expanded its capabilities multi-fold. There's the amazing Kong drum machine with its sampling, synthesis and physical modeling (check our amazing Kong tutorial here at macProVideo). Dr. OctoRex with its live switching between 8 rex loops into one player. Blocks -a pattern-based sequencing and a completely new take on Live Sampling that will change the way you design, record and perform your sounds.

In his friendly style Scott takes explains the intricacies of Reason including an overview of all of its incredible synths, its rack-based construction and its unparalleled back-panel patching system.

Reason is all about making connections and who better to connect us up than Scott Freiman with his detailed explanations descriptive graphics and his intuitive teaching style. So join Scott as he takes us, one-patch-cord-at-a-time, into the sonic wonderland of Reason 5. 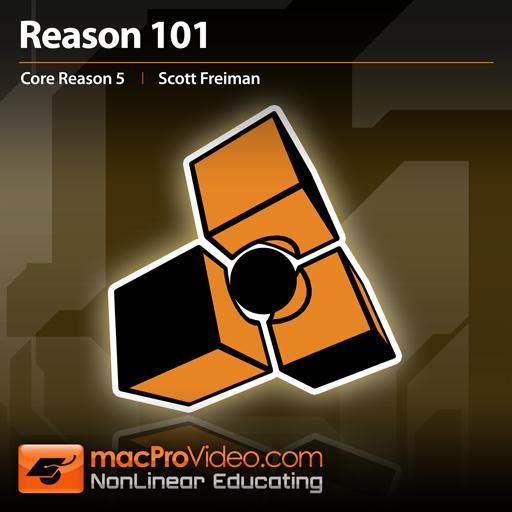