Reason 5 102
KONG: King of Drums
Genre: Audio
2.5 hours of tutorial-videos will show you everything you need to know to get Phat Beats out of Propellerhead Reason's incredible built-in drum machine.

Mo Volans
Mo Volans is world class musician, writer and music software professional whose creative contributions include original music for TV, film and recordings. His insightful writing is featured in many of the top music technology and pro audio magazines around the world.
Watch Free Previews!
View up to 5 free videos from ANY course each day.
Out of free previews? Come back tomorrow to watch some more!
Get A Library Pass!
Watch this course – and ALL macProVideo.com courses – for as long as your pass is active.
Purchase just this course! Watch it anytime, for life.
To download & view offline, use our
NonLinear Educating Player Software.
Overview
Status: Available | Released: Aug 25th, 2010
KONG!! To name a drum machine Kong, you must have created something really powerful... and that's exactly what the mad musical scientists at Propellerhead Software have done. This virtual beat making machine can do it all. And who better to tame the beast than our newest trainer at macProVideo.com, Mo Volans: an authority on everything that makes sound in the digital world!

There's a million ways to design drum sounds in Kong including samples, physical modeling and synthesis. Mo explains how all these sound design techniques work together, along with Kong's effects and modulators, to get us producing powerful drum tracks that are the foundation of any great production.

So if you want to know why Kong is the king of all drum machines join Mo Volans as he shows us just how to get this beast of a drum machine blasting out beats that only "Kong: King of Drums" can produce. Run for your lives!
Outline
Section 1: Section 1: An Introduction to Kong
Section 2: Section 2: The Sound Generators
Section 3: Section 3: The Samplers
Section 4: Section 4: The Support Generators
Section 5: Section 5: Kong's Effects Processors
Section 6: Section 6: Kong's Pads
Section 7: Section 7: Audio Routing
Section 8: Section 8: CV / Gate Functionality
Section 9: Section 9: Kong's Disc Functions
Section 10: Section 10: Sampling
Other courses in this series
What to do next
Embed Video
Embed this video in a blog, forum post, or webpage. 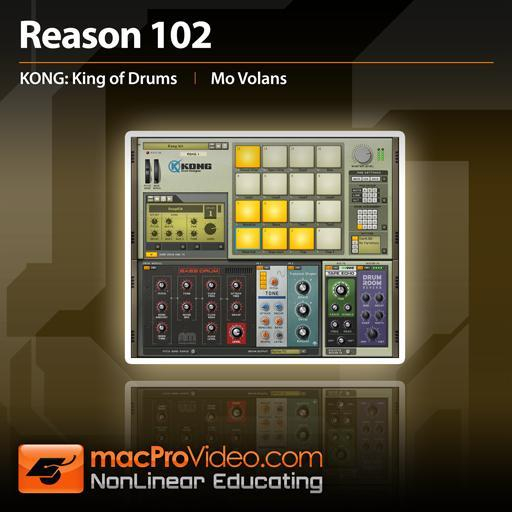