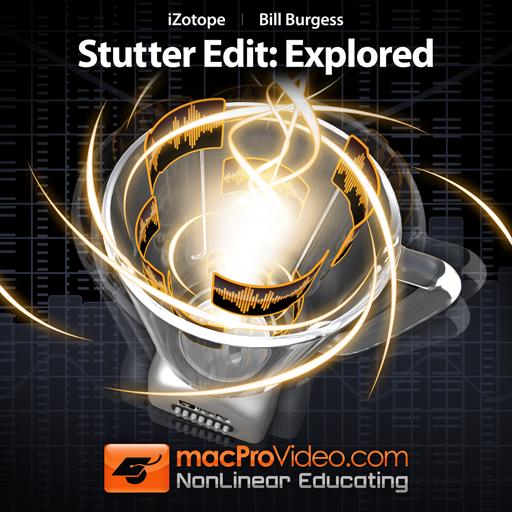 Bill Burgess
Bill Burgess is the former Pro Audio Product Marketing Manager and Logic Pro Artist Relations Manager for Apple Inc. He's also a brilliant software educator with long experience teaching audio producers how to make music!
Watch Free Previews!
View up to 5 free videos from ANY course each day.
Out of free previews? Come back tomorrow to watch some more!
Get A Library Pass!
Watch this course – and ALL macProVideo.com courses – for as long as your pass is active.
Purchase just this course! Watch it anytime, for life.
To download & view offline, use our
NonLinear Educating Player Software.
Overview
Status: Available | Released: May 19th, 2011
Slicing and dicing audio into microscopic fragments and then processing and filtering the slices in real time is what Stutter Edit is all about. This bad-boy plugin by iZotope and BT (who, btw, invented and popularized the stutter edit technique) is like having a MIDI controlled blender to completely chop and reassemble your audio in real time.

Stutter Edit is deep and powerful. That’s why we chose one of our deepest and most powerful trainers, Bill Burgess, to lead you through the many detailed functions of this audio/MIDI mind bender. Bill starts out with the intricacies of how to incorporate Stutter Edit into several different DAW’s including Logic, Protools and Live. From there he continues with a detailed overview of Stutter Edit’s GUI and functionality. Next is a highly disciplined examination of each and every module and how it contributes to the three dimensional whole.

But that's just the beginning. Here's the down low: Bill has known BT since 2006, and his reputation for discovering - and - teaching the undocumented and less traveled pathways of audio software is well established. So when Bill Burgess is personally interested in a piece of software, AND he comes out of hiding to teach it, we owe it to ourselves to sit back, pay attention and listen up!

So if you want to get your creative juices flowing in ways that you never thought possible, join Bill Burgess as he takes you on an audio odyssey through the slice and dice world of iZotope’s new (can’t-live-without-it) plug-in: Stutter Edit.
Outline
Section 1: Section 1: Quick Start
Section 2: Section 2: The Interface
Section 3: Section 3: Stutter & Effects Modules
Section 4: Section 4: THe Generator
Section 5: Section 5: Global Settings & MIDI Input Types
Section 6: Section 6: Routing & Recording
Other courses in this series
What to do next
Embed Video
Embed this video in a blog, forum post, or webpage.