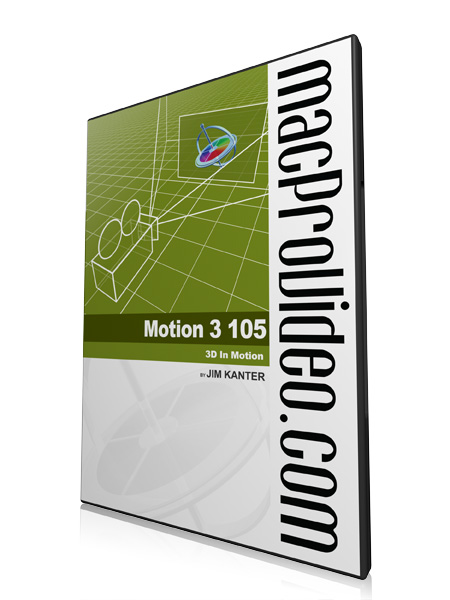 Motion 3 105
3D In Motion
Genre: Video
With the addition of 3D cameras & lighting, Motion 3 is now a world-class application for animating 3D effects. This tutorials shows you the way!
Skills:

Jim Kanter
A certified Apple, Adobe, and Boris trainer, Jim runs the Digital Film Institute of Atlanta.
Watch Free Previews!
View up to 5 free videos from ANY course each day.
Out of free previews? Come back tomorrow to watch some more!
Get A Library Pass!
Watch this course – and ALL macProVideo.com courses – for as long as your pass is active.
Purchase just this course! Watch it anytime, for life.
To download & view offline, use our
NonLinear Educating Player Software.
Overview
Status: Available | Released: Jul 11th, 2008
Lights, camera, action! There's a whole other dimension in Motion 3 that many people never even think about - 3D! Indeed, with it's incredible 3D feature set, Motion 3 makes it easy to create complex fly-throughs and photo-realisitic renderings of almost any scene you can imagine.

In this 3-hour tutorial by veteran educator Jim Kanter, you'll learn all aspects of Motion's amazing 3D features including how to place objects on a plane, creating cameras and lights, and animating your scenes to create stunning realism and visual effects.

This is a comprehensive tutorial, but you don['t need to watch it from beginning to end. Use the detailed menus and keyword search features to quickly find topics of interest. For a full list of what this tutorial contains, check out the Table of Contents.
Outline
Section 1: Viewpoints
Section 2: Orientation
Section 3: Overlays
Section 4: Camera Controls
Section 5: Positioning Cameras
Section 6: Multiple Cameras
Section 7: Camera Behaviors
Section 8: Lights
Section 9: Creating Video Wall
Section 10: Main Titles
Section 11: End Titles
Section 12: Fairy Dust Particles
Section 13: Image Box
Other courses in this series
What to do next
Embed Video
Embed this video in a blog, forum post, or webpage.